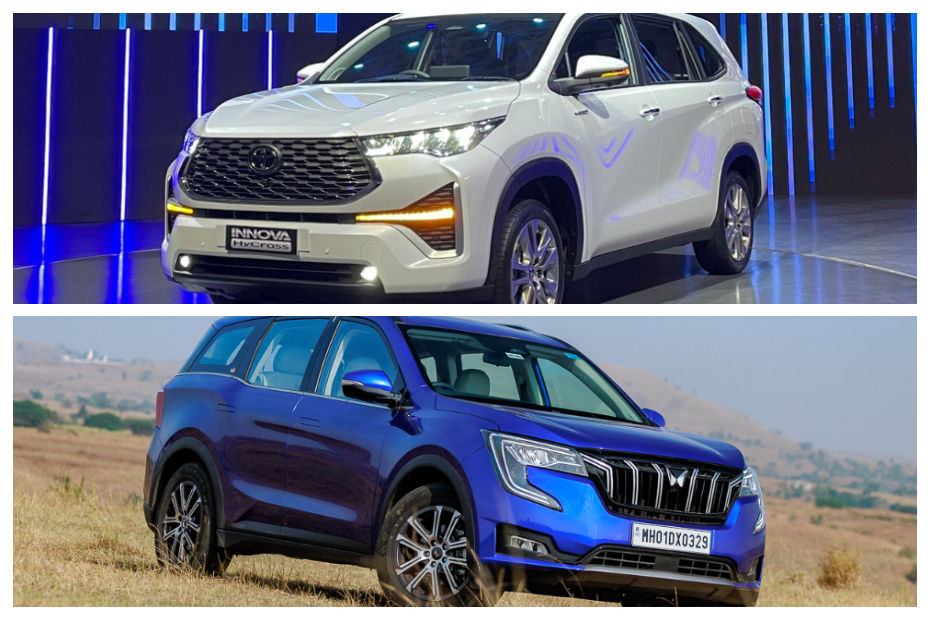 The all-new Toyota Innova, christened ‘Hycross’, is here. Bookings are already underway and the prices will most likely be out in January 2023. Like the Innova Crysta, the Hycross doesn’t have any direct rivals in its niche segment. Its MPV alternatives include the Kia Carens and Carnival, while you can also look at similarly sized and priced seven-seater SUVs like the Tata Safari, MG Hector Plus, and Mahindra XUV700.

The Hycross is a feature-rich offering and in the seven-seater SUV space, the XUV700 is the one loaded with the most technology. They are similar in terms of dimensions and more importantly, both are monocoque three-row cars. However, the MPV also has a handful of feature benefits over the SUV.

Here are the top seven differences between the Innova Hycross and XUV700:

Powering the Innova Hycross is a 2-litre petrol engine, which can be opted with hybridisation adding electric motors and a small battery pack. Thanks to the hybrid technology, the carmaker claims  a fuel efficiency of 21.1kmpl for the MPV. The strong-hybrid engine is good for 186PS/206Nm and can sprint from 0-100kmph in under 10 seconds. It also gets paddle shifters which are not present on the Mahindra.

The XUV700 gets turbo-petrol and diesel engines, both offering a lot more torque than the Innova’s petrol-hybrid option. However, the SUV does the 0-100kmph dash in similar sub-10 second times (as per our performance tests).

The six-seater configuration of the Innova Hycross, in the highest variant, comes with electrically-adjustable Ottoman seats in the middle-row that can recline and come with an extended leg rest. This feature will be especially appreciated by chauffeur driven owners on long journeys.Meanwhile, the XUV700 is offered with two (five-seater) and three rows (seven-seater). The Innova is a three-row model with a seven-seat layout as standard. Officially, Toyota lists its third row as a three-seater bench, therefore referring to the Innova as a seven to eight seater MPV in its communications.

Both cars get dual-zone climate control but in different ways. The Innova Hycross gets independent climate control for the first and second row, while the XUV700 gets separate AC control for driver and co-passenger and just blower vents at the back.

Innova’s feature gives the rear passengers liberty to adjust the climate control without disturbing the front row passengers. That coupled with roof-mounted AC vents should make the MPV’s rear ventilation better than the XUV700, which gets vents at the end of the centre console.

Toyota offers the Innova Hycross with a powered tailgate, which can be opened and closed just with a touch of a button. On the other hand, the XUV700 gets a conventional tailgate that needs to be manually opened or closed by hand, only the latch is electronically released or locked.

The Hycross gets ventilated front seats, which are missing onboard the XUV700. While not used as often as the overall climate control function, it adds a premium touch to the list and is useful in areas of high humidity and extended summers. This comfort-focused feature is actually found on several Rs 10-15 lakh cars, but not with the Mahindra SUV.

For better visibility at night, Toyota Innova Hycross gets an auto dimming internal rear view mirror (IRVM). This simple feature is found in several more affordable cars but the XUV700 seems to get the traditional manual controls for mirror adjustment for night-time driving.

This is another feature that focuses on passenger comfort. The MPV features rear sunshades housed in the rear doors which would restrict the passage of sunlight inside the car and in turn, keep the cabin cooler and offer an added degree of privacy.

Toyota
VIEW ALL
T
Published by
Was this article helpful ?