Gets a large vertically-stacked touchscreen with controls for AC, ventilated seats, and more 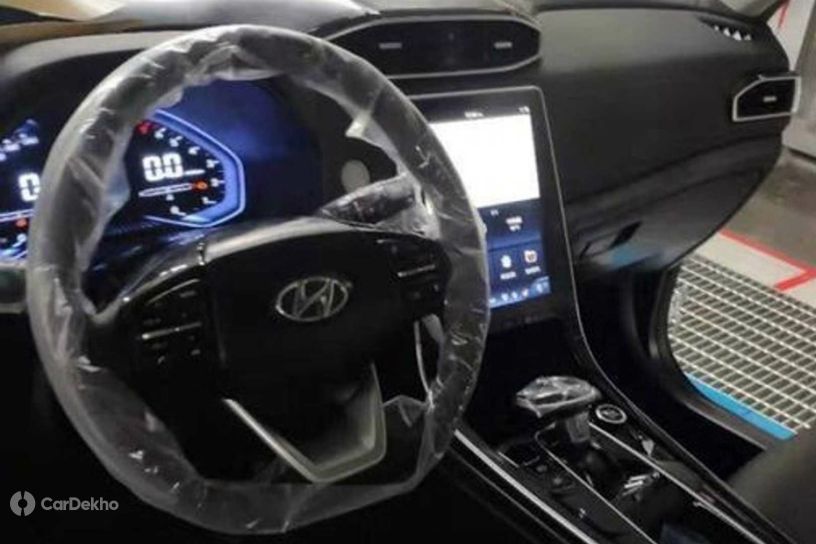 The second-gen Hyundai Creta has been doing rounds on the internet ever since it was first unveiled in China in the form of the ix25 some time back. We spotted a test mule of the compact SUV undergoing tests in India recently and now we have got a glimpse of it’s cabin as well. The images come from Hyundai’s plant in China. It is expected to go on sale in the Chinese market in October this year. Meanwhile, the India-spec Creta is likely to be launched in early 2020 and will be sharing a whole lot with the Kia Seltos.

Coming to the interior, the Chinese-spec Hyundai Creta features an all-black cabin layout. It gets a Venue-like steering wheel with integrated controls and brushed aluminium accents. The instrument cluster appears to be a digital unit with blue backlight. Will Hyundai introduce this in India? We’ll have to wait and watch for this.

The eye-candy though is the vertically-stacked touchscreen which seems similar to the MG Hector’s screen in terms of size. This infotainment unit acts as a display for the rear parking camera, 360-degree surround view, as well as vital stats of the car. It will also house the controls for the AC and ventilated seats.

Apart from this, the upcoming Creta will also feature BlueLink connected car technology like the Venue which allows for remote engine operation and safety features like geo-fencing, live tracking, and more. The gear lever on the second-gen Creta looks similar to the one we usually find on premium cars. The new Creta is also expected to pack a panoramic sunroof, LED headlamps, multiple airbags, a head-up display, an air purifier, and more.

The second-gen Hyundai Creta will share its platform and BS6-compliant petrol and diesel engines with the Kia Seltos. The Seltos’ 1.5-litre petrol engine puts out 115PS/144Nm while the diesel unit produces 115PS/250Nm. A 6-speed manual gearbox will be standard with a different automatic options expected to be available on both the engines. Moreover, the more powerful 1.4-litre turbo-petrol engine (140PS/242Nm) from the Kia Seltos will also be available with the Creta in India.

In terms of dimensions, here’s how the China-spec Creta stacks up against the current India-spec model and its Kia sibling. For further details, head here.

Currently, the Hyundai Creta is priced between Rs 10 lakh to Rs 15.65 lakh mark while the next-gen model could command around Rs 10 lakh to Rs 16 lakh. Once launched, it will renew its rivalry with the Kia Seltos, Nissan Kicks, MG Hector and Tata Harrier.

The great thing about companies like kia and mg coming to India is that the others who were ripping off the indian customers with substandrd features will have to up thei game as well.

We Indians are always made fooled by this companies... We are solved car at a higher price range which is sold at much cheaper outside tnks to keep Kia mg we are getting same price as other countries

We Indians are always made fooled by this companies...the cars are at higher price range which is sold at much cheaper outside tnks to keep Kia mg we are getting same price as other countries