The midsize SUV was launched in India in January this year, ahead of the Auto Expo 2018 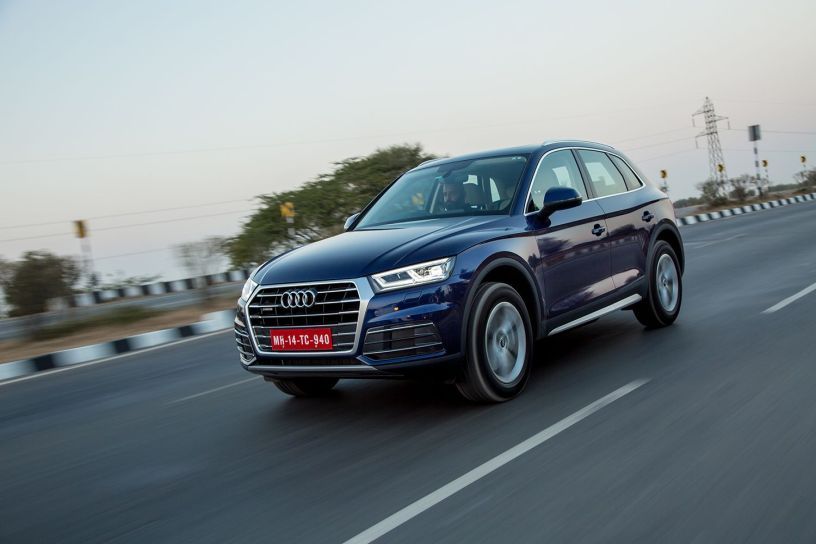 The second-generation Audi Q5 has garnered over 500 bookings within a month of its launch in the country. Introduced at Rs 53.25 lakh (ex-showroom Delhi), the Q5 is powered by a 2.0-litre diesel engine and comes in two variants (Read more about the launch report here). It competes with the Land Rover Range Rover Evoque, BMW X3, Mercedes-Benz GLC and the Volvo XC60.

Retaining the essence of its predecessor the Q5 has now grown in dimensions and is longer, wider and taller by 344mm, 261mm and 5mm, respectively. There’s a minor increase in its wheelbase (12mm) too, which now reads 2819mm.

Thanks to the new Volkswagen Group’s MLB Evo platform, the Audi SUV has gone lighter by upto 90kg (depending on variants). This platform also underpins the Audi A4, A5 and its elder brother, the Q7. Powered by a 2.0-litre diesel engine, it makes 190PS of max power and max torque of 400Nm. A 7-speed dual clutch transmission sends power to all the four wheels. Its ARAI-claimed mileage figure reads 17.01kmpl.

Audi’s signature hexagonal grille takes centre stage at the front of the SUV, flanked by sleek headlamps and daytime running lights (DRLs). Its looks are heavily inspired from its Q7 cousin. However, the rear continues to be more or less the same with the addition of a new set of LED tail lamps and dynamic turn indicators. The sides too are reminiscent of its previous generation.

Cabin is typical Audi affair. Dual-tone finish and faux wood inserts adorn the dashboard of the Q5. However, connected AC vents and retractable infotainment system, which are offered in all latest Audis, have been given a miss here.

Stay tuned to CarDekho for all the latest automotive buzz.