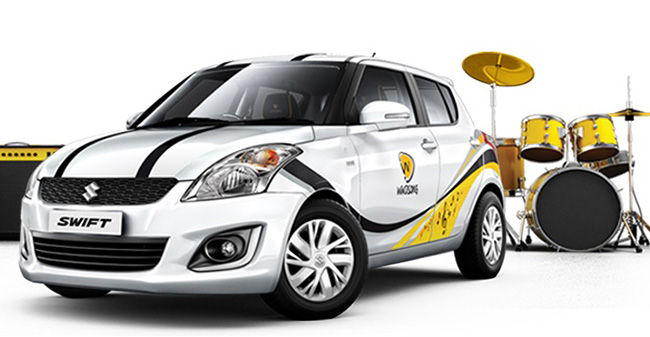 Maruti Suzuki has often claimed that India comes home in a Maruti. Well with the Maruti Swift, they rendered any argument to refute this claim as redundant. Swift was first launched in 2005 and the fact is, if you are looking for a car that has decent handling characteristics and enough grunt to get you from A to B, you can’t help but turn to Maruti Swift. The reason why this car holds its value so well in regards to depreciation, spawns from its excellent build quality, competitive pricing, effective service facilities, impressive fuel-efficiency and exhilarating performance. When Swift was first launched in India many compared it to a Mini Cooper and over the last decade the car has managed to live up to the honor bestowed by the that comparison. So lets take a look in to the history of Maruti Swift.

The first generation Swift marked a milestone in Indian automotive industry, with introduction of features like dual airbags, ABS brakes, air-conditioning, remote central locking, electric windows/mirrors and a six-speaker CD stereo with steering-mounted switches, Swift managed to give the Indian consumer a taste of premium automobiles for a bargain basement price, add to that the impressive safety features, the compulsory ground clearance to tread on Indian road, alloy wheels, fog lights and you can deduce for yourself, why this sprightly little car became an instant hit.

In 2007, A Fiat-sourced diesel engine was made available and in 2010, Maruti gave Swift a Facelift for its 1st Generation model and the car received updates like electric ORVMs, redesigned bumpers and clear-lens taillights.  The 1.3 L petrol engine, from the 1st generation model was replaced with a 1.2 L K-series engine, due to the new BS IV emission norms. The car now had 85bhp, which was produced by a 1.2 L K-series engine, instead of the 87bhp produced by the 1.3 L petrol engine. Despite the decrease in power, the car managed to offer improved fuel efficiency. This change was exclusive to the petrol variants and the diesel engine remained unaltered.

The second generation of Maruti Swift was launched in 2011. The new car had its wheelbase extended by 50 millimeters over that of the first generation and incorporated various aesthetic updates. The design approach was to bestow styling to provide a longer and more curvier appearance. The new Swift features a revised version of the 1.2 liter K series petrol engine, which is carried forward from the first generation facelift. A four-door saloon model was also developed for India by Maruti in 2012, just like its previous generation. The saloon is shorter than the previous generation and this was done to make the car fall under the important tax threshold of four metres of length.

In 2014, Maruti launched its facelift for the second generation Swift. Though the updates were not major, the facelifted model was claimed to be more efficient than before. The petrol model is claimed to be capable of delivering a fuel efficiency of 20.4 kmpl. The 1.3-litre multjet diesel engine puts out the same power output but through tweaking ECU and reducing friction, has been made more efficient and now offers a fuel -efficiency of 25.2 kmpl. On the exterior, the updated model gets a redesigned front bumper, bigger airdam and silver accents for fog lamp housing. Car also features a new honeycomb front grille. The top-end variants get new alloy wheels and the base and mid-range variants get new wheel caps.