Update: Nissan has introduced a new base-spec XE variant of the Kicks diesel. It now starts at Rs 9.89 lakh, around a lakh less than the previous entry price point. In addition to this, the carmaker has discontinued top-spec XV Premium Option variant, making the XV Premium the new top of the line variant. It gets all the features of the XV Premium Option at Rs 13.69 lakh and costs Rs 96,000 less than the now discontinued variant. The revised prices and feature packages are likely to help the Nissan Kicks SUV revitalise its position in the SUV segment. Read more about it here.

Nissan has finally launched its new compact SUV, the Kicks, in India at a starting price of Rs 9.55 lakh. The Kicks will help the Japanese carmaker compete in the popular compact SUV segment that’s led by the Hyundai Creta. It will also compete with its Renault cousins, the Duster and Captur.

The new Nissan Kicks is offered in four variants - XL, XV, XV Premium and XV Premium + - which are priced as follows:

The Nissan Kicks is available with a set of 1.5-litre engines. The petrol motor produces 106PS of power and 142Nm of torque and is mated to a 5-speed manual transmission. The diesel engine, on the other hand, is paired with a 6-speed manual and puts out 110PS and 240Nm. The ARAI-certified fuel efficiency of the petrol engine is 14.23kmpl while the diesel offers 19.39/20.45kmpl.

In terms of safety features, the Kicks comes with dual-front airbags, rear parking sensors, ABS with EBD and brake assist, and front seatbelts with pretensioners and load limiters as standard. The rearview camera is offered from the XV variant onwards, while the top-spec XV Premium + variant also gets a 360-degree camera, front side airbags, rear fog lamps, ESP, traction control and hill hold assist.

As far as comfort and convenience enhancing features are concerned, the Nissan Kicks offers cruise control and climate control with rear AC vents as standard. Some of the features on offer include an 8-inch touchscreen infotainment unit that supports Android Auto and Apple CarPlay, 17-inch alloy wheels, leather upholstery, rain-sensing wipers, cornering front fog lamps and LED projector headlamps. It also gets a front armrest as standard, along with bits of chrome accents on the inside door handles and parking brake lever.

Much of the Kicks’ appeal lies in the appearance of the compact SUV, which is offered in seven colours. In addition to that, the top-spec variant is offered with a choice of four dual-tone colour options as well. Nissan is also offering three styling packages called the ‘Essential’, ‘Style’ and ‘Urban’ for additional touches to the interior and exterior of the Kicks compact SUV. These include decals, steering wheel covers, ambient lighting, seat covers, floor mats and more.

Nissan is also offering a 3-year warranty, 3-year 24x7 roadside assistance (RSA) and a 3-year service maintenance package at no extra cost. Nissan claims this will offer 2-3 per cent additional value against the Kicks’ competition. It will also be offered via a subscription plan, further details for which will be available soon.

The Nissan Kicks will also face competition from the Maruti S-Cross as well as the upcoming 2019 KIA SP concept-based SUV. Later in 2020, it will even compete with Skoda’s made-for-India SUV as well as the Volkswagen T-Cross.

The Nissan Kicks is well equipped with some segment first features such as an 8-inch touchscreen infotainment unit, front cornering fog lamps and a 360-degree view camera as well. It also gets cruise control, auto AC with rear vents and LED DRLs. Which feature stands out the most to you? Let us know in the comments.

Both Petrol & Diesel Engines To Be Offered

The Nissan Kicks will be available with a choice of 1.5-litre petrol and 1.5-litre diesel engines. The petrol engine has a power output of 106PS and 142Nm with a 5-speed manual while the diesel produces 110PS and 240Nm and is mated to a 6-speed manual transmission. An automatic gearbox option is not expected at launch but should be offered at a later point. 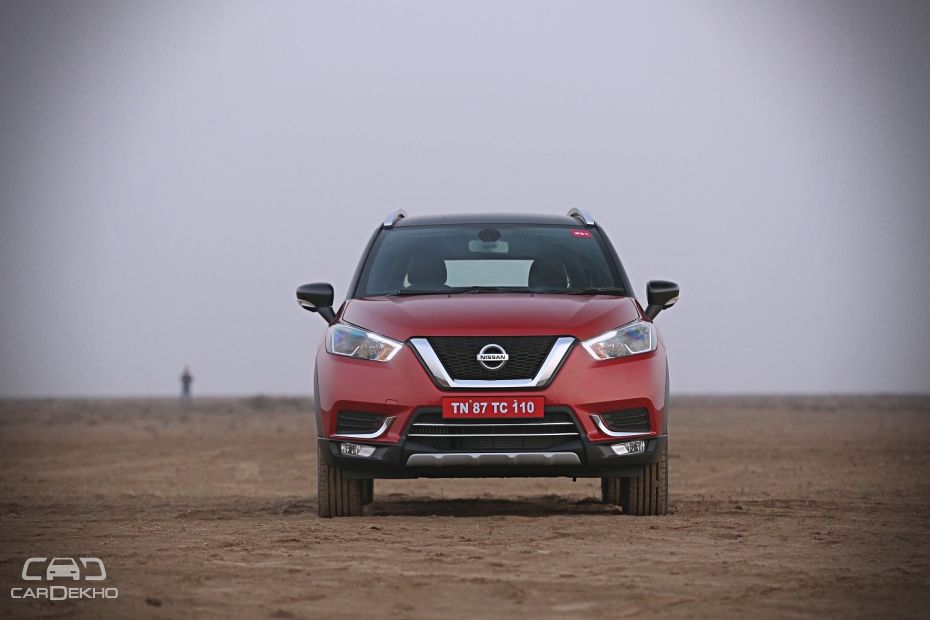 Nissan’s V-motion grille along with the LED projector headlamps give the Kicks a distinct look and road presence. The steeply raked rear windscreen which is flanked by angular tail lamps with LED inserts lends the Kicks a sporty characteristic. What do you make of the styling and appearance of the new Nissan Kicks? Tell us in comments.

While we await the launch proceedings to begin, we’d like to tell you that the Kicks is an international model and is sold in countries such as the USA, Brazil, China and the UAE. It was originally unveiled as a concept in 2014. The India-specific Kicks is bigger than the global model and has a ground clearance of 210mm.

The CarDekho team is in Delhi at the launch of the new Nissan Kicks which has been welcomed by some unexpected winter showers this morning. The presentation will be underway in a short while. What kind of pricing do you think the Nissan Kicks would carry? We expect it to start somewhere close to the Rs 10 lakh mark.