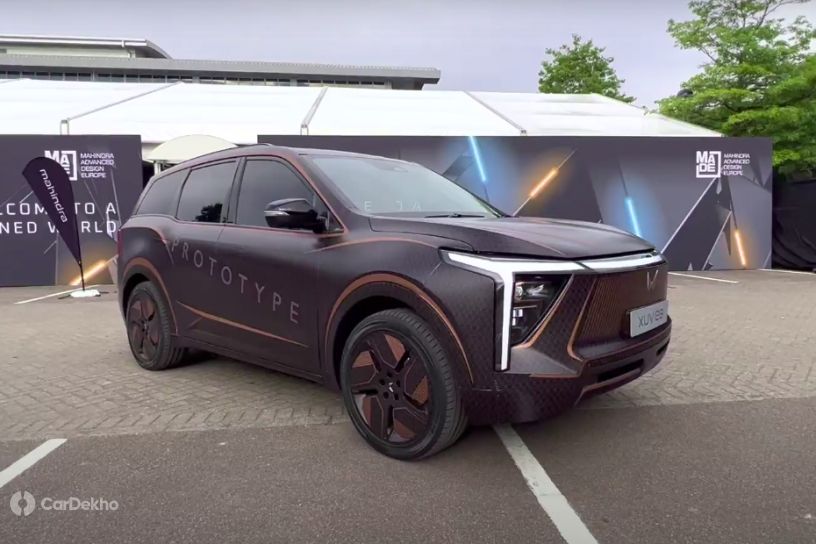 In this story, we take you up close and personal with the XUV.e8 (covered in camouflage, made up of the ‘Twin Peaks’ logo), which is the all-electric iteration of the XUV700. It will be the first SUV from the newly revealed models to go on sale, reportedly by December 2024.

In profile, you can see the typical XUV700-esque silhouette with the typical C-pillar kink and flush-fitting door handles. This being the concept, the XUV.e8’s doors sport the ‘Prototype’ decal and copper finishes along the wheel arches, window line, and near the side-cladding portion.

The XUV.e8 is equipped with aero-specific alloy wheels, flaunting bronze elements. At the rear, the changes are minimal and the only noticeable difference is the redone bumper.

Inside, the XUV.e8 has an all-black cabin theme, with the highlight being the tri-screen setup of 12.3-inch, which dominates the dashboard. Expect the production-ready version to feature copper accents on the inside as well.

Mahindra has also equipped the electric SUV with a new gear shifter and also the new copper-finished Mahindra logo with a blue backlit. This revised logo represents the new ‘XUV’ lineup of electric SUVs from the carmaker.

Apart from that, the layout of the AC vents, the climate control switches and drive selector rotator are placed in the same place.

The XUV.e8 will be underpinned by Mahindra’s new INGLO modular platform, which is capable of accommodating batteries of 60kWh and 80kWh, with a fast charge capacity of up to 175kW. The larger battery claims a WLTP-certified range of up to 450km.

The new platform will be suitable for both rear-wheel drive (RWD) and all-wheel drive (AWD) while the electric powertrains will offer up to 285PS for RWD models and up to 394PS in AWD models.