Both the MPVs have a three-star rating, but which is safer? 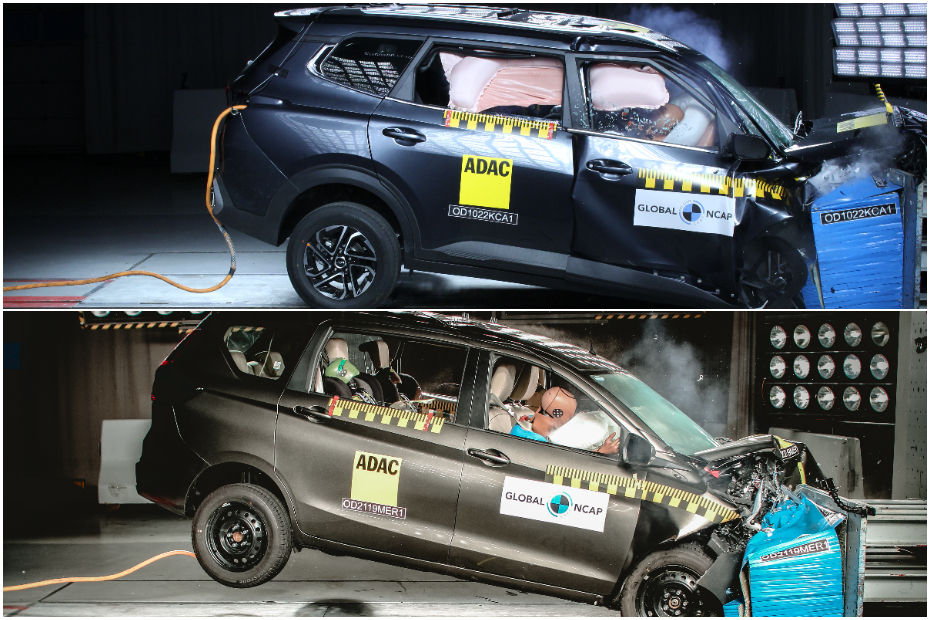 Global NCAP crash test ratings are given to cars to show their ability to keep passengers safe in case of an accident. According to the test protocol, the car is crashed into a frontal offset barrier at a speed of 64kmph, and following that, its performance is assessed for the rating.

Prior to the most recent update in the GNCAP testing protocols, segment rivals Kia Carens and Maruti Ertiga were tested and assessed on equal parameters. Let’s see how their scores compare. Just like all the cars, their base variants were crash tested.

Both the Kia Carens and Maruti Ertiga secured three-star safety ratings in the global NCAP crash test. The Ertiga gets dual front airbags, rear parking sensors, and ISOFIX seat anchorages as standard. However, the Carens is much more feature-rich, packing six airbags, electronic stability control, hill assist, ISOFIX, and a tyre pressure monitor as standard. So how did they both get the same score?

The Kia Carens scored 9.30 points out of 17, while the Ertiga is just a bit behind with 9.25 points. Here are the key observations:

Both have managed to secure three-star ratings in the rear (child) occupant’s safety. While the Carens scores 30.99 points out of 49, the Ertiga reports 25.16 points. Here are our observations:

The bodyshell integrity of a car is a significant part of the crash test as it determines how strong the car’s structure is. Both the Carens and Ertiga failed the integrity test with an unstable body shell, incapable of withstanding further loadings.

So technically, the Kia Carens is the safer of the two. However, going by the government’s mandate for six airbags for improving the vehicle safety can be proven wrong here. Despite getting six airbags, the Carens is just a bit safer than the dual airbags-equipped Ertiga.