BMW Will Debut The i4 In India On April 28

The all-electric sedan has a claimed range of up to 590km, and there’s also a performance oriented M variant 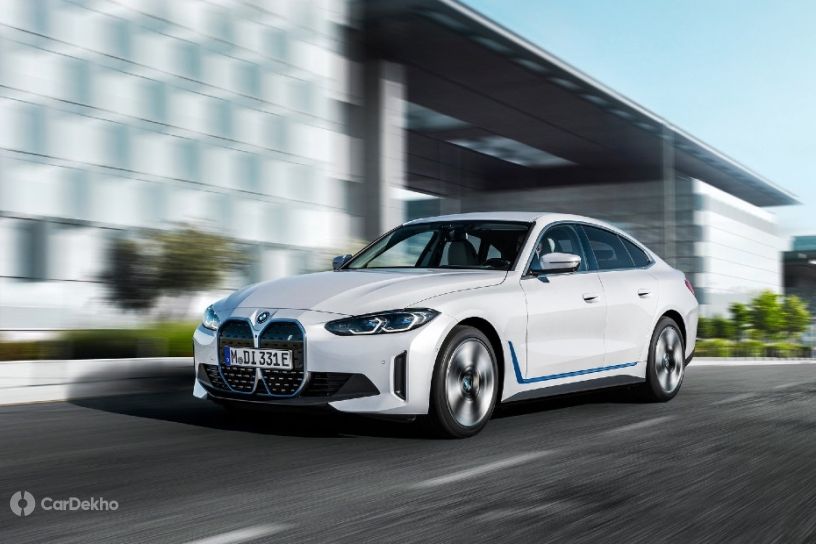 The first all-electric BMW sedan debuted in June 2021 as the i4. It will be making its Indian debut on April 28 ahead of its expected launch in May. The i4 will be BMW’s second electric offering in India after iX SUV.

The i4 is based on the same platform as the current 4-Series Gran Coupe four-door and that’s why it looks so similar. It has the same proportions and dominant design details including the large kidney grille shape which now houses panels instead. Around the rear, it gets the similar bumper treatment with angular air channels but no extra apertures that would be present on the combustion-engined 4-Series. There are blue outlines and accents around the car to highlight its electric nature. It also gets optional alloy wheels with an EV-specific design that is optimised for smoother aerodynamics to reduce drag.

The familiarity between the i4 and the 4-Series continues through to the interior as well in terms of the driver controls and central console. There is one big difference though: the curved integrated display for the 12.3-inch digital instrument cluster and the 14.9-inch infotainment system. As a premium BMW offering, it is loaded with comforts like multi-zone climate control, driver assist systems, and ADAS tech. There are blue highlights around the cabin as well, like the exterior, lest one forget that they are in an all-electric BMW.

The electric propulsion systems used by BMW are called eDrive. The standard i4 eDrive 40 variant uses a single electric motor, which has a performance rating of 340PS and 430Nm, to drive the rear wheels. Then there’s the performance-focussed i4 M50 which uses a dual-motor all-wheel-drive setup that offers 544PS and 795Nm. Both variants get the same 83.9kWh battery pack which offers a range of up to 590km for the eDrive 40 and 521km for the M50 (as per WLTP). That’s a bigger battery than the one offered in the iX SUV which has a claimed range of upto 425km.

BMW’s electric sedan has a fast charge capacity of upto 200kW which can recharge the battery from empty to 80 percent in around 30 minutes. Meanwhile, a full charge using the BMW home wallbox 11kW charger will take a little under 8 and a half hours.

The BMW i4 is expected to be offered in India in both trims mentioned above with the eDrive 40 likely to be the more affordable choice. Even so, prices for the i4 are expected to start from Rs 80 lakh which is higher than the prices of the BMW 5 Series. It will not have a direct rival in India at launch but will go head-to-head with the Tesla Model 3 whenever it arrives. BMW will likely bring limited quantities of the i4 to India so expect the first batch to be sold out quite quickly.

Also read: Mercedes-Benz EQS Luxury EV Sedan Will Be Assembled Locally, To Arrive Towards End Of 2022