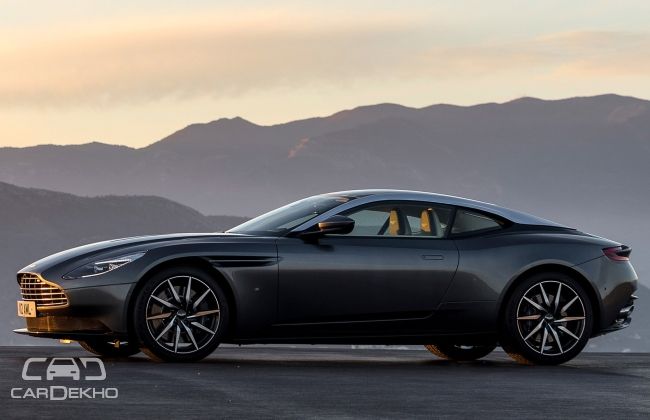 Aston Martin has finally fulfilled the dream of a whole lot of auto fanatics and a few wallet-heavy enthusiasts in the country. The British manufacturer of luxury sports cars has launched the stunning DB11 in India. Priced at Rs 3.97 crore (ex-showroom Delhi), the DB11 rivals the Ferrari 458 Speciale in the Indian market. This latest iteration of the DB family is the purest definition of beauty and is one of the best looking Aston Martins ever created.

Unveiled at the Geneva Motor Show in March this year, the DB11 is a successor to the DB10 – the Aston Martin made exclusively for Mr Bond to be used in Spectre. For the DB11, a lot of design cues were picked from the DB10, such as the alloy wheel and the bulging rear wheel arches. The overall silhouette of the cars also remains identical. The DB11 also gets full LED head and taillights to complete the modern look. Inside too, the brilliance of the DB11’s elegance is eminent. It has a simple dual-tone layout and a clutter-free centre console. The car features a twelve-inch TFT LCD display in the all-new instrument cluster which presents vehicle information along with an eight-inch TFT screen in the centre of the dashboard for infotainment.

Coming to the meat of the matter, the DB11 is the first car in the AM line-up to pack a powerful twin-turbo V12 punch. Underneath the imposing exterior, the DB11 has an in-house developed 5.2-litre twin-turbo V12 engine which produces a hefty 616PS of power and 700Nm of torque. These figures make the DB11 the most powerful in the DB family till date. Also a first for the DB family is a limited slip differential with active torque vectoring, which gets the power via an eight-speed automatic ZF transmission with multiple driver dynamic modes – GT, Sport and Sport Plus. All of the above elements come together to propel the DB11 from 0-100kmph in just 3.9 seconds and all the way to a top speed of 322kmph.

The DB11 is a worthy addition to the Aston Martin India line-up. With the attractive price tag and the Bond legacy, we are sure that this car would be spotted on Indian roads soon. Have a look at the car in the detailed image gallery.