Adventure Lovers, This Skoda Kushaq Xpedition Edition Could Possibly Be Headed Your Way 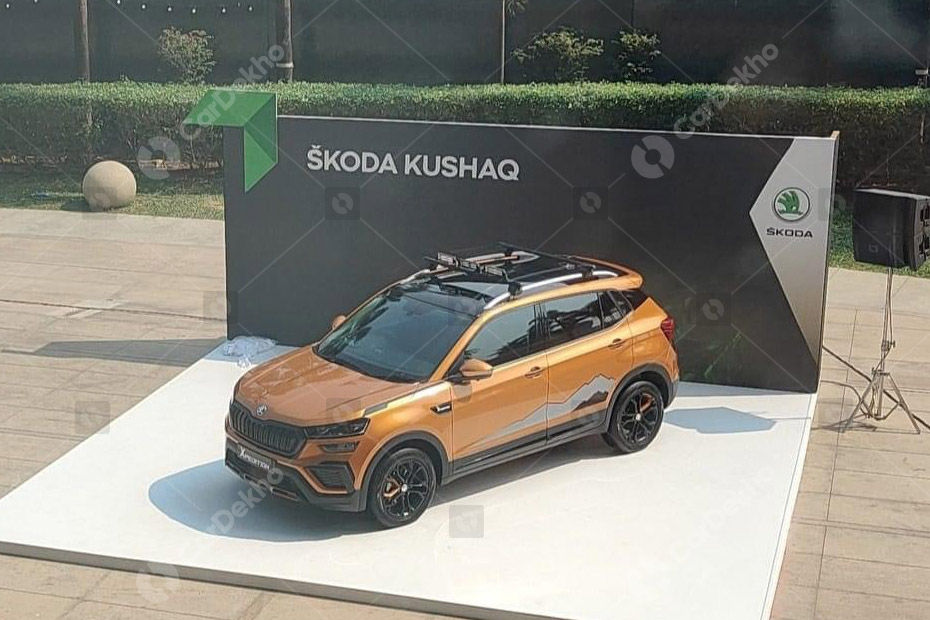 Towards the end of 2022, Skoda had announced its plans to offer model year (MY) updates for the Kushaq and Slavia in the following year. Now, a fresh spy image of what appears to be a special edition of the compact SUV has surfaced online.

The Kushaq, finished in its Honey Orange shade, was seen sporting some cosmetic upgrades and an ‘Xpedition’ nameplate, hinting at a special edition. Other visual differences include a roof rack with auxiliary LED lights, blacked-out details, body decals of mountain ranges, and black alloy wheels with orange inserts. It also has a black finish on the C-pillar to give it a ‘floating roof’ effect.

Changes On The Inside

Although no images have come out which show the interior of the SUV’s special edition, we are expecting it to get some minor revisions to set it apart from the standard model. These could very well be limited to the cabin theme and upholstery and differently coloured inserts as usually observed with special editions.

Also Read: Skoda Octavia and Superb To Go Off Sale By March 2023; Could Make A Possible Comeback

Any Differences In Equipment?

Although the Kushaq Xpedition’s exact features list is yet unknown, one possibility is that the special edition SUV might get a 360-degree camera according to the spy shot. Other expected features include ventilated front seats, a 10-inch touchscreen (like the Monte Carlo), and six airbags.

Skoda already offers a special edition of the Kushaq, called the Monte Carlo, in India. It is based on the top-spec Style trim and can be had with both the turbo-petrol engines of the Kushaq. The Kushaq Monte Carlo also gets similar visual upgrades including blacked-out chrome bits and black finish for the bumpers.

What’s Yet To Be Known?

Among all the details that are yet to be known about the special edition model, the main information that’s pending confirmation is if Skoda plans to offer these upgrades from the factory or at dealer-level. Also, we are yet to get an update on the launch timeline of the Kushaq Xpedition Edition.

For now, the Kushaq is priced in the range of Rs 11.59 lakh to Rs 19.69 lakh (ex-showroom Delhi). It locks horns with the likes of the Maruti Grand Vitara, Hyundai Creta, MG Astor and Volkswagen Taigun.