Will share its diesel powertrain with the upcoming Kia Seltos 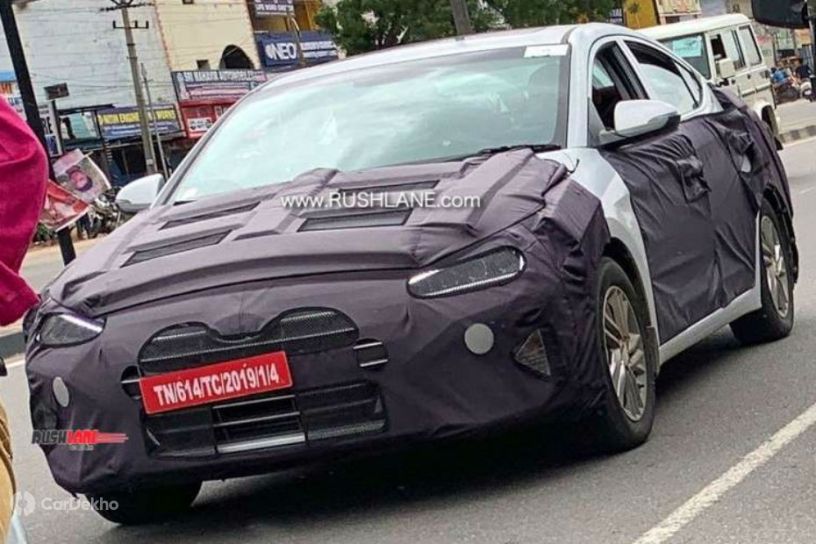 While preparing for the Grand i10 launch on 20 August, Hyundai has simultaneously been working on the Elantra facelift for India. Spied in a camouflaged state, the mid-size sedan seemed to be running its final test cycles. The Elantra facelift was revealed last year in August and is already on sale in international markets.

While the bodywork wasn’t visible on the test mule, the illumination units looked pretty clear and similar to the international-spec triangular quad-LED projector units with LED DRLs. The grille covered by camouflage has been seen in the international markets and is much more prominent than before in a way similar to Lexus cars. The Elantra facelift’s front bumper and bonnet design will also be much sharper than before.

The side profile of the Elantra facelift looks similar to the existing model with the exception of the alloy wheels design. When it comes to the rear end, the Hyundai Elantra will sport a solid change compared to the outgoing model thanks to new LED tail lights and the ‘Elantra’ moniker taking up space on the entire boot lid. The number plate has also moved from the boot to the rear bumper, which also houses reverse indicators.

The interiors of the new Hyundai Elantra aren’t much different from before but sports an updated instrument cluster, AC vents, steering wheel and central console design. The Elantra facelift is bound to remain a feature-rich offering with its existing set of equipment which includes an 8-inch touchscreen with Android Auto, Apple CarPlay, electric sunroof, wireless charging, push button start/stop, hands-free smart trunk, six airbags, ABS with EBD, ESC, and hill start assist. Hyundai’s Blue Link technology should also debut on the sedan since it is already available on the much more affordable Venue.

Under the hood, the Hyundai Elantra will get a new BS6-compliant 1.5-litre, four-cylinder Smartstream diesel engine from the upcoming Kia Seltos. The new smaller diesel engine produces around 115PS/250Nm while the outgoing 1.6-litre unit delivers 128PS/260Nm. A 6-speed MT should be standard whereas a torque converter automatic should be optional on the Elantra facelift. The 2.0-litre petrol unit, whose current figures stand at 152PS/192Nm, will be made compliant with BS6 norms.

Prices of the Hyundai Elantra facelift are expected to remain largely unchanged in the range of Rs 13.82 lakh to Rs 20.04 lakh (ex-showroom Delhi). It will maintain its rivalry with the Skoda Octavia and the Honda Civic.