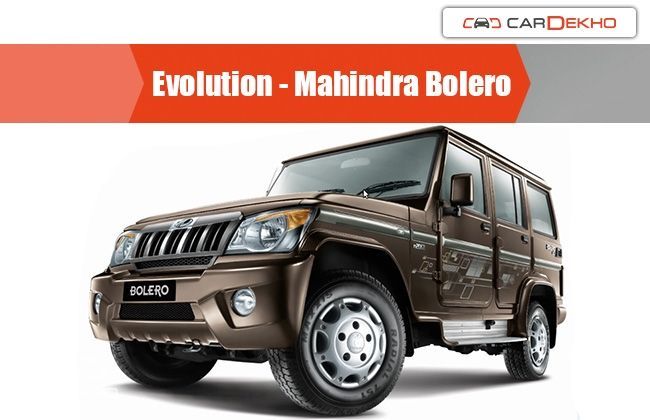 The Mahindra Bolero has grown to become India’s No.1 sports utility vehicle. The car has managed to win the hearts of Indians all over the country even with its basic platform. Bolero has been responsible for various innovations over the years and with its high ground clearance, it facilitates driving on rural roads and is well-suited to Indian road conditions. Over the years, with its macho styling and mechanical dependability, the vehicle has managed to win hearts of the urban, as well as the rural populace. So here is a look into the History of Mahindra Bolero.

On August 4th 2000, the first Bolero was launched by Mahindra with a price tag of Rs. 4,98,503 (ex- showroom Mumbai). Bolero was a replacement for the Armada Grand and was the first car to feature an independent front suspension in Mahindra’s portfolio. Under the hood the vehicle featured a 2.5 litre 72.5 bhp diesel engine. On 24th March 2004, MAHINDRA & Mahindra Ltd (M&M) launched an open top utility vehicle named, the Invader based on its Bolero platform, as a replacement for the Classic. By the Year 2004, the company sold over 8800 units.The car went on to become the No.1 SUV in India and captured 20% of the market share with more than 24,800 units sold by 2005

An update for the Bolero with more bolder and stylish look was introduced on 2nd March 2007. The car remained mechanically unchanged and featured completely redesigned exteriors, which prominently included changes to the bumpers, redesigned headlights and taillamp cluster. The car also incorporated vinyl graphics on the bonnet, which also ran alongside the doors. In october 2008, Bolero SLX was launched with Micro-Hybrid technology, which switches the engine off, when not required, hence ensuring lower fuel consumption. This Launch was part of Mahindra’s environment friendly, sustainable mobility solutions initiative, which a year later helped Bolero win the highly coveted TNS “Voice of Customer Award”. A year later, a Bolero VLX(Storm) with CRDe technology was introduced in the market, which was the most powerful Bolero till yet.

In 2011, Bolero received another aesthetic update, which included new muscular bumpers and a signature front grille with a mesh. In addition to the looks the car also received the new peppy and much more refined m2DiCR engine, which helps the car achieve better fuel efficiency and acceleration, while maintaining dependability and low operating cost of the DI engine. This helped the car sell more than 1 lakh units. The new Bolero came with a much more aggressive stance and macho exterior styling. The interiors of the car received upgrades like a Digital Cluster with Driver Information System (DIS) and a digital Engine Immobilizer, along with an all new stylish dashboard, new wood-finish central console and all-new seats and upholstery wrapped in a dual-tone interior. The car also featured a voice messaging system and carried over the fuel-saving Micro Hybrid technology. Olympic Bronze Medalist and five-time World Boxing Champion MC Mary Kom was felicitated by Mahindra in 2012 and received a Mahindra Bolero.

Mahindra Bolero became the No.1 selling SUV for the 9th year in a row, in 2015 by selling over 1,00,000 units for the 4th consecutive year. Bolero became the 5th largest selling passenger vehicle brand. Bolero mostly ranks in the top 10 selling cars in India today.