Looking for an SUV to go off-roading? Here are your options if you are on a budget 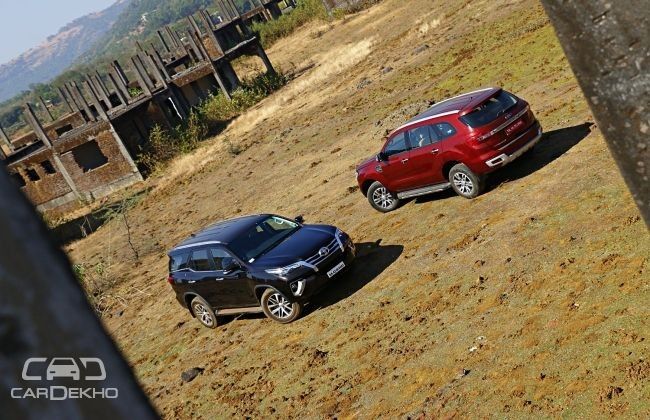 Sports Utility Vehicles (SUVs) have always had a charm of their own. While some wow you with their looks, others impress with their off-roading capability. The better ones manage to do both at the same time. While making SUVs look good isn’t a tough nut to crack, giving them the ability to conquer the roughest terrain is slightly tougher. However, the one that we all crave for is the marriage between the two. We’re listing down 10 SUVs which possess head-turning looks and 4-wheel drive (4WD) drivetrains (not all-wheel drive) that you can buy for just under Rs 35 lakh in India.

The number of variants that the Mahindra Thar is available in ends at just three. Out of those, two feature 4x4 drivetrain. These two variants, however, differ when it comes to what powers them. While the DI 4WD is powered by a 2.5-litre, 4-cylinder diesel engine that produces 64PS of power and 195Nm of torque, the CRDe model gets a cubic capacity of 2.2-litres and produces 107PS of power and 247Nm of torque. Both engines come mated to a 5-speed manual transmission with high and low reduction gears.

The Force Gurkha has always been overshadowed by its competitors. But we can’t run away from the fact that it is a capable off-roader. Like its primary rival, the Mahindra Thar, the Gurkha is available in three variants - three- and five-door versions of the Xplorer and the Xpedition. While all three variants are powered by the same 2.6-litre, 4-cylinder diesel engine that produces 85PS of power and 230Nm of torque, the 4WD system is only available on the Xplorer version. The engine comes mated to a 5-speed manual transmission and gets differential locks at the front and rear axles.

With only two variants on offer, 2WD, and 4WD, the Getaway is a pick-up truck based on the previous-gen Scorpio. This pick-up truck has four doors and can seat five passengers. Since it is based on the previous generation of the Scorpio, it does feel a bit dated. However, the one place it doesn’t feel old-school is under the bonnet. It is powered by a 2.2-litre, 4-cylinder diesel engine from the current Scorpio that delivers 120PS of power and 280Nm of torque. The engine comes mated to a 5-speed manual transmission that also features low-range capability. With that flatbed at the rear, modification possibilities are virtually endless.

The Mahindra Scorpio has been one of the best-selling SUVs for the company. In its second generation, the Scorpio is available in eight different variants. However, 4WD system is only available in two of them. While both the variants differ in features, they are powered by the same 2.2-litre, 4-cylinder diesel engine that produces 120PS of power and 280Nm of torque. The 5-speed manual transmission is coupled to a 4WD system that features low-range gear shifts as well.

Isuzu’s pocket-friendly offering for those who want a versatile vehicle comes in a pick-up avatar. The D-Max V-Cross is only available in one trim level. Powering it is a 2.5-litre, 4-cylinder diesel engine that pumps out 136PS of power and 320Nm of torque. Mated to it is a 5-speed manual gearbox and a shift-on-the-fly 4WD system. If you like the combination of a flatbed at the rear, sophistication inside the cabin and enough oomph from under the bonnet to tackle the rough stuff, the Isuzu D-Max V-Cross is the one for you.

The Safari tag has been nothing short of an icon in the Indian automobile industry. While homegrown automaker, Tata Motors, recently pulled the plug on the original Safari, the moniker currently lives on in the guise of the Storme. A total of four variants are available but only one gets 4WD. This variant gets its firepower from a 2.2-litre, 4-cylinder diesel engine that produces 156PS of power and 400Nm of torque. Transmission duties are handled by a 6-speed manual gearbox and the 4WD system features low-range capability.

Next in line is the Isuzu mu-X, which is available in just one trim level. This variant can be had either with a 2WD system or a 4WD system. While both the drivetrains are powered by the same 3.0-litre, 4-cylinder diesel engine that generates 177PS of power and 380Nm of torque, it is only the latter that gets the ‘Terrain Command’ control with 'shift-on-the-fly' and, 2-high and 4-high selection at up to 100kmph. The engine comes mated to a 5-speed automatic transmission (torque converter) which features sequential shift and electronically-controlled brake shift lock.

Mitsubishi’s Pajero Sport hasn’t seen the same kind of fan following that the original Pajero did in India a few years ago. Nevertheless, the Pajero Sport is a capable SUV and is currently available in eight different variants. Half out of those feature the company’s famed 4WD system. While they differ from each other on equipment levels, they house the same engine and drivetrain technology. The 2.5-litre, 4-cylinder diesel engine churns out 178PS of power and 400Nm of torque and comes mated to a 5-speed manual transmission.

The Toyota Fortuner is the only SUV in this list that is available with a choice of petrol and diesel engines. A total of six variants are available but it is just two of the diesel-fed ones that get Toyota’s 4WD system. The firepower is harnessed from a 2.8-litre, 4-cylinder engine that puts out 177PS of power and 420/450Nm of torque for the MT/AT versions respectively. Both the manual and automatic gearboxes get 6-speed configurations, with sequential shift, paddle shift and shift-lock available with the latter. Both variants feature low-range capability as well.

Ford’s flagship SUV in India, the Endeavour, is one of the best off-roaders that money can buy. It is currently available in a total of three variants but comes with a 4WD system in its fully-loaded Titanium avatar. The 3.2-litre, 5-cylinder diesel engine cranks out 200PS of power and 470Nm of torque. Mated to the engine is a 6-speed automatic transmission (torque converter) and the 4WD system features low-range capability. Those figures make it the most powerful and the most expensive 4WD SUV under the Rs 35 lakh bracket.