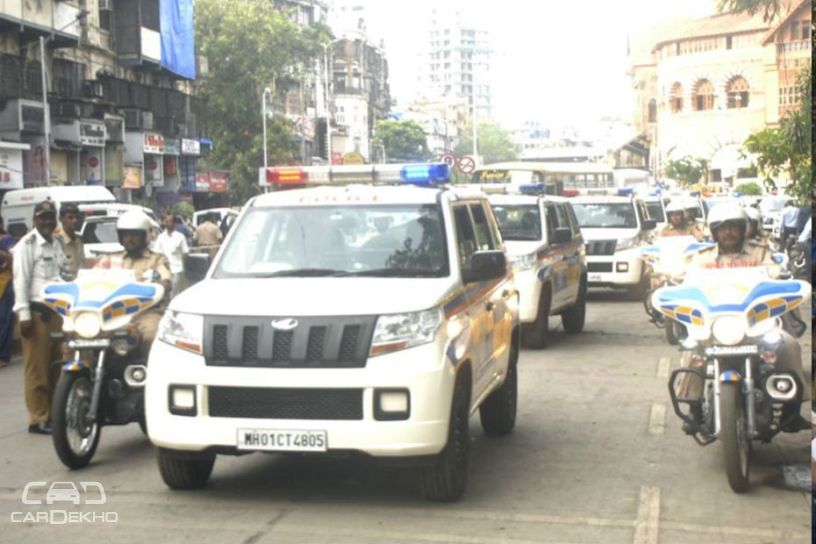 In a bid to add some more firepower to its patrolling department, the Mumbai Police has acquired a new lot of 195 TUV300s. The latest fleet of SUVs was flagged off from the police commissioner’s office by Maharashtra chief minister Devendra Fadnavis. Some of the other popular cars used by the police include Bolero, Scorpio, Innova, Gypsy and Ertiga.

The police-spec Mahindra TUV300s are finished in white and get a police beacon and siren as well. It is powered by a 1.5-litre mHawk diesel engine that puts out 100PS of power with 240Nm of torque. This particular variant can seat seven. However, Mahindra launched a nine seater version of the SUV called the TUV300 Plus recently. This version is powered by a bigger 2.2-litre mHawk 120 engine that produces 120PS and 280Nm. Mahindra offers the  TUV300 with a 5-speed manual or a 5-speed AMT.

With cities like Delhi and Mumbai getting a lot more congested, the police department needs vehicles that are compact yet tough. The TUV300 measures less than four metres in length, which should make it easier to manoeuvre in the city when compared to bigger vehicles like the Innova and Scorpio. Also Read: Mahindra TUV300 Plus vs Maruti Ertiga: Variants Comparison

While the Gypsy had been serving the Indian Army and various police forces for long, it’s now growing old and is expected to soon go out of production. We expect Maruti Suzuki to offer an alternative to the Gypsy in India and it could be in the form of the new Jimny that is set for a global showcase in July 2018. Read more about the Jimny here.