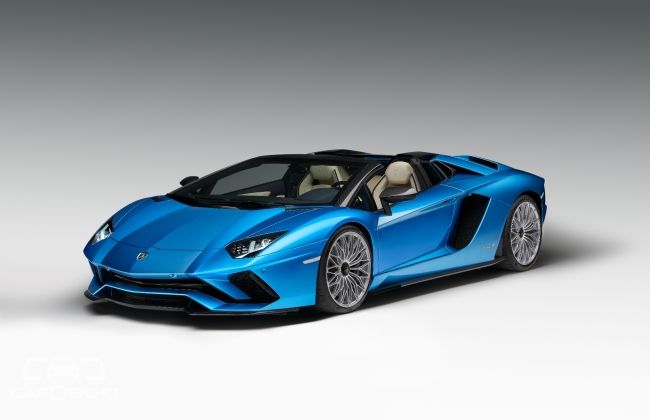 Italian supercar maker, Lamborghini, has finally launched the drop-top version of its Aventador S at Rs 5.79 crore (ex-showroom). Unveiled at the Frankfurt Motor Show, the Aventador S Roadster has been simultaneously launched in India. The roadster gets a number of trim and colour options along with endless options of personalising it through Lamborghini’s ‘Ad Personam' personalisation program.

Retaining the design and performance of the Aventador S coupe, the roadster takes it a notch higher with extensive use of carbon-fibre and revised bumpers to improve its cooling and aerodynamics at the same time. Besides the roof, the distinguishing factor between the Aventador S Roadster and its coupe cousin is the distinctively different lines at the rear.

The Aventador S Roadster gets four driving modes – STRADA, SPORT, CORSA and the new EGO. Switching to each mode alters the response from throttle, steering, suspension and traction. The newly introduced EGO mode allows the driver to set each of the setting according to his preference.

Furthermore, the new four-wheel steering improves agility at low speeds and stability at high speeds. In combination with the Lamborghini Dynamic Steering (LDS), the feedback becomes more responsive than ever before, even during sharper turn-ins.

The only mid-rear engine V12 super sports roadster on sale today, the Aventador S Roadster sprints from 0-100kmph in a stunning 3 seconds with a top speed of 350kmph. Despite the additional weight of 50kg, its acceleration is almost neck-and-neck with the coupe, which takes a second lesser to complete the same run. The naturally-aspirated, 6.5-litre V12 motor produces 740PS of power and 690Nm of peak torque.

The two panel roof weighs just under 12kg and, like the rest of the car, employs a lot of carbon-fibre in its construction. Finished in matte carbon-fibre, each panel weighs around 6kg. The roof panels get an easy fastening system which lets you remove or install them quickly. When not in use, they can be stored in the front boot.

The Aventador S Roadster also gets an electrically operated rear window which can be lowered down when you want to listen to the beats of your Aventador. Pulling it up, on the other hand, reduces wind noise and turbulence.

If you are looking for the quintessential open top experience but also crave for speed, then the Aventador S Roadster is just the car for you. But you'll have to wait till February 2018 to get your hands on one.