A new car with an all-new engine and it’s coming to India a few months before the New Year. Aston Martin is set to launch the DB11 in India, having revealed the supercar at the Geneva Motor Show in March this year. Our sources tell us the launch is expected in October 2016 and an official announcement can be expected next month. 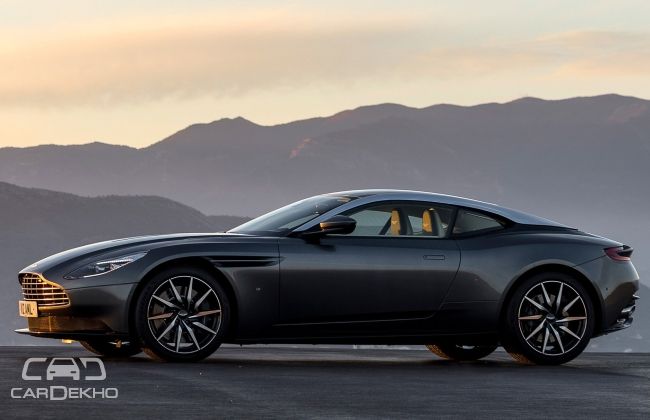 As per our brand insiders, Aston Martin India has imported just one unit of the DB11 so far. The same car will be showcased in major cities through invite-only events with the guest list including a host of petrolhead elites. The price? Well, we don’t have an exact figure, but expect a sticker tag of around Rs 4.50 crore. Forget being wallet-draining by itself, the expected price would make it cost around a crore more than the car it replaces i.e. the DB9.

Then again, what you get is a British grand tourer that’s been developed fresh from the ground up with looks that can turn your knees into jelly. Built from a new, lighter and stronger bonded aluminium structure, the DB11 sports aesthetics that combine a distinctive blend of engineering sensibility with artistic design flow, while leaving Aston’s classic styling overtones intact.

The clamshell bonnet wraps around the LED headlights and swoops down aggressively to blend with the trademark grille. The side profile highlights the long-bonnet, stubby-boot combination that adds a retro touch, while the swooping roofline dives into the slim-cut LED tail lights. Dual tail pipes rocket out of the rear end, reminding you that even with all the grace in design, the DB11 is still a tool for scorching the roads.

Aston has developed the 5.2-litre, twin-turbo V12 in-house and this new engine produces a smile-inducing 608PS of power and 700Nm of torque. Apart from making the DB11 the most powerful production ‘DB’ model ever it also makes it the fastest with a top speed of 322kmph, and the quickest off-the-line with a claimed 0-100kmph time of 3.9 seconds. The new motor comes paired with an 8-speed automatic gearbox by ZF and is manufactured at the Aston Martin Engine Plant (AMEP) in Cologne, Germany and, while it makes its debut in the DB11, it will be used in future models as well. Each engine is put together by just one technician from start to finish, with the process taking 8 hours to complete.

Step into the cabin and you’re welcomed by a 12-inch TFT display for the instrument cluster, a centrally mounted 8-inch infotainment display that’s operated by a touchpad along with a wide-range of customized trim options that will turn the report you’re reading into a book!

Let’s face it, the number of people in India who will buy one will be less than the number of astronauts who’ve been to outer space. What the money buys you is the prestige of owning an entirely new machine with the winged Aston Martin badge, not to mention, brand CEO Dr Andy Palmer himself calls it the most important launch in the company’s 103-year old history.

But wait! Before you have your PA fetch your gold-plated cheque book, Ferrari is set to launch the GTC4 Lusso next year at a similar price. Our choice? Well, since we’re fantasizing anyway, why not both?