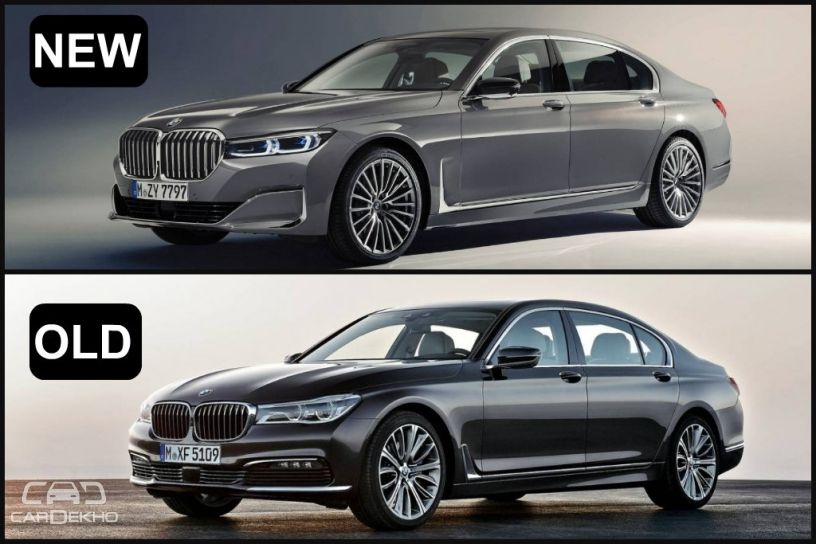 BMW has unveiled the updated version of its flagship sedan, the 7 Series, in China. The sixth-gen 7 Series was first unveiled in 2015 and launched in India the following year. The mid-life update brings with it new powertrain options and more technology. So let’s take a closer look at the updated 2019 BMW 7 Series.

Although the 2019 7 series has a taller bonnet, the overall height and width of the car stay the same at 1479mm and 1902mm, respectively. Expect BMW to bring the long wheelbase version of the sedan in India as it does with the outgoing one. While the 2019 7 Series has grown by 22mm in length and now measures at 5260mm, the length of the wheelbase remains unchanged at 3210mm.

The most notable visual update is the massive single-piece kidney grille which seems to have been taken inspiration from the new X7 SUV. The bonnet is now 50mm taller at its front most point and that single-piece BMW kidney grille is 40 per cent larger than the one on the outgoing model. The headlights are now slimmer in design while the restyled front bumper has new trim pieces in each corner. It also gets the option of Laserlight technology with selective beams over the standard-fit adaptive LED headlamps.

At the rear of the new 7 Series, there are new, slimmer, 3D LED taillights with a new light-strip below the chrome bar that covers the full width between the taillights. This rear light strip design is seen on many new cars, including the Audi A8 and the new Porsche 911. Below the bumper, the exhaust pipe trim is now wider than before while still retaining the same shape.

When seen from the side, the new BMW 7 Series looks quite similar to the older version as the naked eye might not be able to differentiate the slightly taller front end. The air curtains behind the front wheel arches are more upright than before, which BMW claims optimises the air flow. It also gets new alloy wheels as well.

There are other changes too which aren’t quite visible on the surface. The new 7 Series uses thicker laminated glass in the side windows and extra acoustic insulation around the rear wheel arches to muffle outside noises in the cabin even more.

BMW has not updated much inside the cabin of the new 7 Series. There is a new leather wrapped steering wheel with a refreshed arrangement for the multifunction buttons and a re-positioned tray for wireless smartphone charging. The BMW Touch Command system has been updated too and the rear-seat entertainment setup now gets full-HD touchscreen displays.

The driver gets a 12.3-inch BMW Live Cockpit Professional digital instrument cluster with the with sat-nav as standard. The 10.25-inch central display unit gets new BMW OS 7.0 which supposedly makes everything run better, including faster access to settings, customisable displays, voice control and gesture control too. Like its German rival, Mercedes-Benz, BMW too has a digital AI assistant which is controlled by voice commands. It also gets various relaxation programmes and experience modes to change lighting, air con, seat massage, seat heating/ventilation, window shades and fragrancing as needed.

BMW claims it has made progress with its Driving Assistant Professional, which is a set of driver aids like steering and lane control assistant. The standard-fit parking assistant now comes with reversing assistant tech too.

The hybrid gets a 3.0-litre, twin-turbo, inline-six engine which produces 326PS and 500Nm on its own. Here though, it is aided by an electric motor for a combined output of 394PS and 620Nm. That’s an increase of 68PS of power and 120Nm of torque.

The electric motor is powered by a 12kWh lithium-ion battery located under the rear seat section and offers an all-electric range between 50-58km depending on the variant. The claimed fuel efficiency for this hybrid luxury sedan is between 38.46kmpl to 45.45kmpl depending on the drivetrain and size of the vehicle. The 745e hybrid is available in three variants - RWD, long wheelbase with RWD and long wheelbase with xDrive (AWD).

The outgoing 740e iPerformance variant used a 2.0-litre twin-turbo petrol engine with a 9kWh battery for a combined output of 258PS and 400Nm, and a claimed fuel efficiency of 47.63kmpl. It too came with the choice between RWD and the long wheelbase with both RWD and xDrive.

Here’s the entire lineup of petrol and diesel powertrains that will be offered with the new BMW 7 Series:

The 7 Series is currently sold in India with the following drivetrain options:

The BMW 7 Series facelift will launch in India soon but there is no official timeline from the manufacturer yet. We expect the facelift to come to India without the hybrid variant and only in the long wheelbase avatar in 2019. Currently, the BMW 7 Series is priced between Rs 1.22 crore and Rs 1.34 crore (ex-showroom).