The Honda Jazz along with the Hyundai i20 can be credited for creating the premium hatchback segment in India. The Japanese premium hatchback when launched in 2009 might have been a bit ahead of its time. It had premium features like magic seats along with ample amount of cabin space that could put any sedan at bay. Rising petrol prices and increased demand for diesel hatchbacks were the main reasons behind the not-so-successful first innings of the Honda Jazz. However in 2015, the Jazz was launched again in a completely new avatar and with the very potent 1.5Litre Diesel iDTEC engine that can be seen in the Honda City/Amaze/Mobilio. So lets take a look in to the history of Honda Jazz. 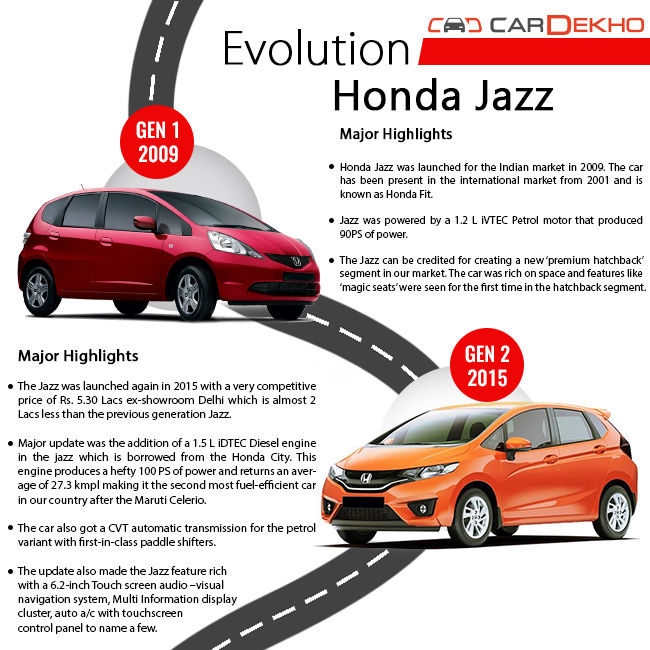 The car was launched in India in 2009 with a 1.2 litre petrol motor that had 90 PS of power and all the variants came standard with dual-front airbags with ABS/EBD brakes and OEM music system with steering controls. But the Jazz missed out on features like alloy wheels, height adjustable seat, dead pedal, parcel tray, arm rests and lumbar support. We got the 2nd Generation of the Jazz in our country and internationally it is known as the Honda Fit.

The second Innings of the Honda Jazz in India has been a successful journey for Honda until now. All thanks to the competitive pricing and Honda’s much famed 1.5 litre iDTEC engine. The car has been revamped cosmetically as well as mechanically. 6.2-inch Touch screen audio –visual navigation system, Multi Information display cluster, Auto A/C with touchscreen control panel, Alloy wheels, Paddle shifters on the Petrol AT variant and improved ride quality were the changes it saw. The Jazz shares its platform with the Honda City and Honda calls this a 'Crossfade Monoform Design’. The Jazz now comes with a choice of one petrol manual, one diesel manual and one petrol automatic. The petrol automatic features first-in-class paddle shifters.