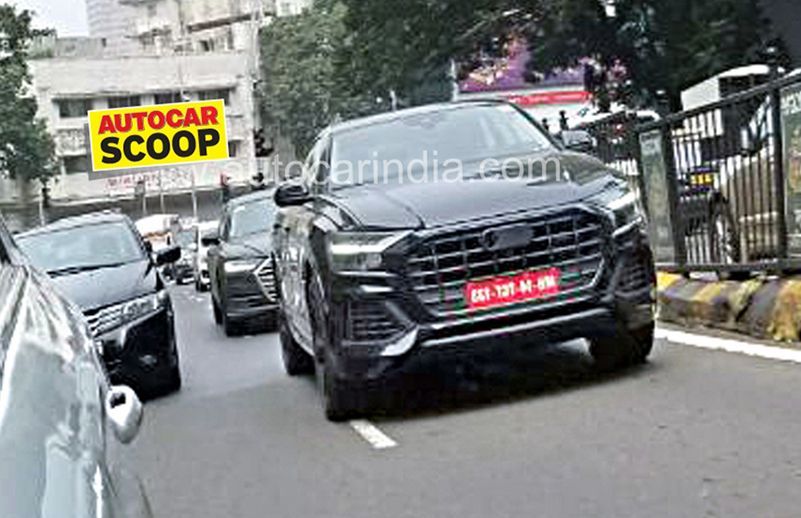 Audi’s upcoming flagship SUV, the Q8, has been spied in India ahead of its global premiere, which will happen next year. The Audi Q8 concept made its world debut at the 2017 Detroit Motor Show and a second concept, the Q8 Sport, was unveiled at the 2017 Geneva Motor Show. It is not surprising that Audi has brought the Q8’s test mule to India as the Ingolstadt-based automaker has been testing several cars in the country.

Though it looks unmistakably an Audi SUV, the Q8 gets a quite rakish coupe-like roofline, a gaping octagonal single-frame grille and menacing overall stance. Have a look at the spied test mule as it towers over the other vehicle near it. The Q8 will be the Audi A8 of SUVs, so expect its equipment list to match that of the automaker’s flagship sedan, the fourth of which was revealed earlier this year. Like the Q8’s concepts and the new A8, the cabin of the production-spec SUV will have a minimalistic design, with multiple touchscreens inside.

In terms of engine options, the Q8 concept is a plug-in hybrid model, while the Q8 Sport concept packs a 3.0-litre TFSI six-cylinder petrol engine with a mild hybrid system and an electric-powered compressor (electric turbocharger). The former also uses the same 3.0-litre TFSI petrol motor. The production-spec model is likely to carry forward these powertrain options among others.

Audi confirmed that the Q8 will go into production in Bratislava, Slovakia, in 2018. When launched, the Q8 is expected to be priced in the vicinity of Rs 1 crore and is likely to be locally assembled.

Check out: Audi India Could Launch An EV By 2020