Renault Duster Facelift Spied ahead of its Launch

Update: Renault Duster has been finally revealed at the Auto Expo 2016 in front of the large media gathering. The compact SUV needed an update for quite a long time and this was the only grand platform to show the potential of the car. The new Renault Duster will be challenging the popular Hyundai Creta in the segment besides gaining the lost market share that was stolen by Ford EcoSport. Check out the dazzling image gallery, new features and revealing of Duster facelift at the 2016 Auto Expo.

The all new Indian spec Renault Duster facelift was recently spotted in Chennai. The facelift which is said to launch towards the end of 2015 was found testing under black vinyl on Chennai roads. 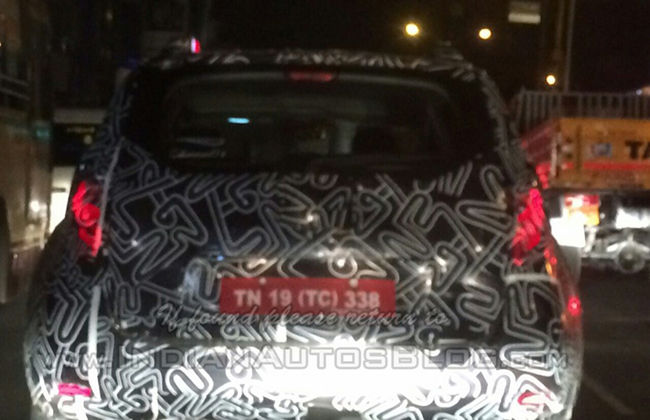 On the outside, the car gets new alloy wheels and new (what looks like) LED tail lights, although the cluster appears to stay the same. Renault is also supposed to make changes in the front grill and headlights but that still remains a mystery as the pics do not cover the front of the car. On the inside, the dashboard is also covered to hide the contents which tell us that the inside of the car will also get a major makeover. The new Duster is supposed to retain its 1.5-liter dCi diesel and 1.6-liter petrol engines, but some reports suggest that the new facelift will come with a 6-speed dual-clutch EDC automatic transmission.

The Duster was earlier the only 5-seater compact SUV in India and had a great response from the customers, however with new crossovers like the Ford EcoSport and the Nissan Terrano coming in the segment, Renault has suffered in sales. Now with more cars like Maruti S-Cross and Hyundai Creta, which has registered over 18,000 bookings since its launch, flooding the segment, it has now become more important than ever for the original 5-seater compact SUV to prove its mettle.

The 2016 Renault Duster was revealed in Russia a while back. Indian variant of the Duster is also said to have the same features as its Russian sister. The car is said to carry the same looks and upgrades. Read More