Next-gen Audi A8 To Feature Mild Hybrid Powertrain As Standard

The engine is fired up automatically as soon as the vehicle in front starts moving ahead. 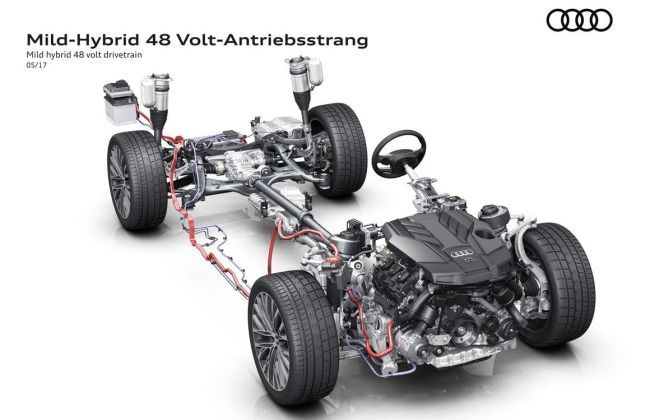 The Volkswagen Group has already faced severe criticism and suffered huge financial losses due to the Dieselgate scandal. In a period where most automakers were focusing on reducing emissions and shifting to electric powertrain, the German giants were resorting to the use of cheat devices to pass emission tests across the world. The severe backlash from the public and the authorities have now forced the Volkswagen Group to rethink their strategy on future mobility solutions. To this measure, the group’s luxury division, Audi, recently announced that that it will introduce three all-electric cars by 2020.

Now, the German carmaker has announced that the upcoming, fourth-generation of its flagship sedan, the A8, will be equipped with a mild-hybrid powertrain right from the get-go. The mild hybrid powertrain will be something similar to what is offered in the Maruti Suzuki Ciaz SHVS, but more advanced and convenient.

The mild hybrid drive primarily consists of two main components, a water-cooled 48-volt belt alternator starter (BAS) which is permanently connected to the combustion engine and a 10Ah lithium-ion battery, situated in the boot, which acts as an energy accumulator.

In addition to the start-stop operation which is active from naught to 22kmph, the mild hybrid tech allows the new A8 to coast up to 40 seconds within the speed range of 55kmph to 160kmph with its engine shut off, thus leading to zero emissions. However, whenever the driver requires power, a tap on the throttle pedal brings the internal combustion engine back to life and moves the car forward without any delay.

The new start-stop function is quite advanced from what is offered on other cars today. The new A8 will be able to distinguish between different driving scenarios and act accordingly. When there's no traffic ahead of the car, the BAS fires up the engine quickly. However, if the driver wants to turn up the air conditioning while waiting at the lights, the combustion engine starts off without a hint of noise or vibration.

Another highlight is what Audi likes to call predictive convenient starting. This feature ensures that the engine is fired up automatically as soon as the vehicle in front starts moving ahead. This feature makes use of the A8’s sophisticated powertrain management and a set of sensors, which includes a front camera. The mild hybrid drive leads to a fuel saving of 0.7-liters per 100km. Audi will reveal the new A8 at the Audi Summit in Barcelona on July 11.

Read More on : Audi A8 diesel

a
Published by
Was this article helpful ?