The RV trucks will be fully kitted out with running water, a functioning kitchen and even a bio-toilet! 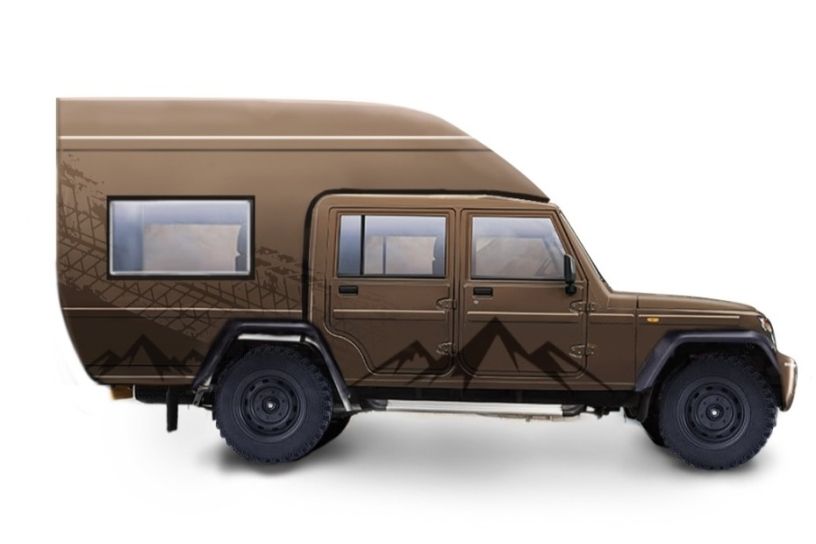 As the world opens up again, outdoor car-based recreational activities such as in-car camping and overlanding are gaining ground in India. Unfortunately, with a sparse market for RVs (recreational vehicles), Indians have little choice apart from aftermarket modifications to turn their vehicle into a home on wheels. Hence, Mahindra has tied up with a company called Campervan Factory to build relatively affordable RVs based on the Bolero Camper Gold pickup truck platform.

Incubated at IIT Madras, the caravan manufacturing company will co-develop the motorhomes with Mahindra. The carmaker has also involved the International Centre for Clean Water (ICCW) for plumbing and waste disposal solutions, and the Saint Gobain Research Centre for developing the glazed windows.

According to the carmaker, the camper trucks will have sleeping and dining space for four, along with running water and appliances such as a mini-fridge, television, microwave and even an optional air conditioner. If you're wondering how all of this would fit within the Bolero's frame, check out this video of a custom-built, Bolero pickup-based caravan equipped with similar furnishings:

There will also be a shower and bio-toilet – an environmentally friendly toilet that eliminates the need for a septic tank. It stores solid wastes in a separate dry tank filled with bacteria that decompose the waste into methane, carbon dioxide and water. Here's a handy video of a bio-toilet that's built for use in an RV:

Mahindra is aiming this campervan for aggregators in the tourism industry, so it’ll likely be available for tourists to rent for short durations. In addition, states such as Kerala, Maharashtra, Madhya Pradesh, Odisha and Uttar Pradesh have announced policies that’ll encourage RVs and help create caravan parks across the country.

The upcoming RV’s Bolero pickup truck underpinnings will likely make it easier to drive than large bus-based motorhomes. As stock, the pickup truck comes with a 76PS and 200Nm diesel engine paired with a 5-speed manual transmission. Carrying the camper on its bed won’t be a challenge for the truck, since it has a payload rating of up to 1000kg.

Car-based camping is a relatively new form of outdoor recreation in India, and RVs have only recently gained the attention of outdoor enthusiasts. You can’t buy an RV off-the-shelf unless you’re willing to spend as much as it costs to buy an upscale apartment in a big city. Even then, most RVs on offer are modified commercial vehicles such as mini-buses. The rent-based model will surely be a more viable option for most people looking for an occasional outdoor vacation.

The only factory-built RV you could get in India was the now-discontinued Mercedes-Benz V-Class Marco Polo launched in 2020. It cost Rs 1.38 crore (ex-showroom) to buy new, but offered the basic amenities such as a roof-mounted tent, awning, movable floor space, a kitchenette and rear seats that could be folded flat to form a bed!

According to KM Vandhan, director, Campervan Factory, the new Bolero luxury campers will be a boon for holidaying in India. “Caravan tourism is a blessing for the sector, especially given the effects of the pandemic," he said.

We expect caravan tourism to grow in the coming months as pandemic restrictions are eased and caravan parks crop up around the country. Meanwhile, how do you feel about the idea of an in-car vacation? Let us know in the comments.

Mahindra
VIEW ALL
C
Published by
Was this article helpful ?