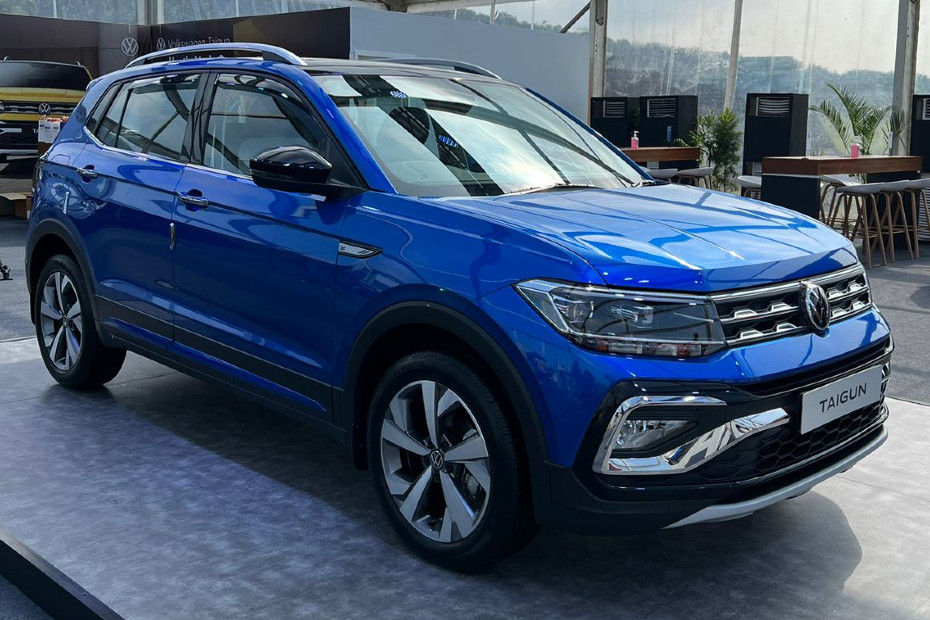 The Volkswagen Taigun compact SUV recently completed one year of sales in India with strong results. It even got a new special variant commemorating its first anniversary which is only available with the 1-litre turbo-petrol engine and not the 1.5-litre turbo-petrol engine. The celebratory variant gets a host of unique cosmetic details and now you can take a closer look at them in the gallery below:

The 1st Anniversary Edition Taigun is painted in a new colour otherwise not offered with the SUV, called Rising Blue. It’s the same shade as the one offered with the Virtus sedan. Based on the top variant from the Dynamic Line, it gets various chrome details on the front end.

Most of the visual changes on the exterior for the special variant can be seen in the profile. There are colour-matched accents for the door cladding and although the 17-inch alloys are not unique to this edition, they form a vital part in giving the SUV its overall look and road presence.

Volkswagen has added a special fender badge to make it easier for people to identify that this is the 1st Anniversary Edition of the Taigun.

The contrasting black ORVMs add to the premium aesthetic of the very blue 1st Anniversary Taigun.

Volkswagen has fitted it with a couple of accessories too, like the door visors and door edge protectors.

The most prominent design addition for the 1st Anniversary Edition Taigun is the black decal on the C-pillar that contrasts with the bright blue body colour.

The 1st Anniversary Edition is based on the Topline variant and offered with both manual and automatic transmissions. The latter also comes with paddle shifters behind the steering wheel. Cabin features include auto AC, ambient lighting, digital driver’s display, sunroof and 10-inch touchscreen infotainment system.

This special edition gets an identifier in the cabin in the form of the “1st” badge on the bottom spoke of the steering wheel.

Another special detail for the anniversary edition variant based on the Dynamic Line Taigun are the presence of the aluminium pedals.

The 1st Anniversary Edition of the Taigun comes at a premium of Rs 30,000 over the regular Topline variant, priced at Rs 15.7 lakh for the manual and Rs 17.2 lakh for the automatic. Its regular variants are priced from Rs 11.56 lakh to Rs 18.71 lakh (all prices are ex-showroom, Delhi).