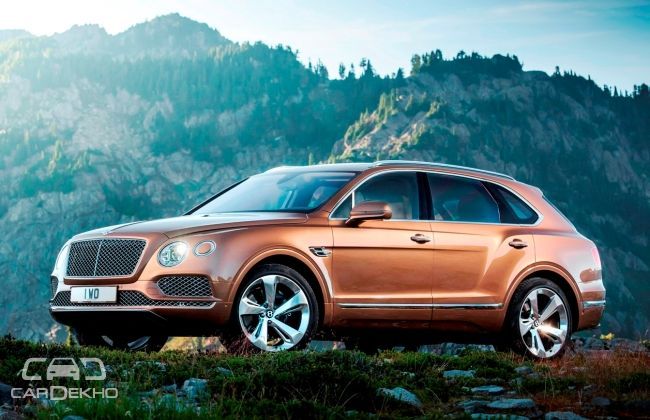 There is good news for all the SUV fanatics with really deep pockets. The Bentley Bentayga is coming to India on 22 April 2016. The English automaker has finally entered the big boy SUV space, and since it is a Bentley, it had to be immersed in style, elegance and luxury. So, when it launched, wrapped in a package called Bentayga, we knew we were in for a treat.

It looks, feels and drives like a typical Bentley, full or power and grunt. Up front, it gets the signature large matrix grille that has been carried forward to the large air dams. The other signature element is the double-barreled headlights, with the first being daytime running units. The car gets segmented tail lamps with ‘B’-shaped illumination graphics at the rear, panoramic glass roof on the top and a set of 20-22-inch alloy wheels to ride on.

All this combined gives you a sense of royalty and exclusivity, like no other Bentley ever.

Inside, one is greeted by a quagmire of exclusive leather and handcrafted wood. The leather seats are available with contrast stitching and a quilted diamond design on the ‘shoulders’ and bolsters. The rear seats can be adjusted in eighteen different ways and are available in fifteen colour options.The front seats can be adjusted in twenty two ways and come with heating, ventilation and massage system.

Other comfort features include an 8-inch touchscreen system on the dashboard which has a 60 GB in-built storage space and supports thirty languages. For rear passengers, there is a 10.2-inch Android tablet with 4G, Wi-Fi and Bluetooth connectivity.

Powering this 5.1-metre long mammoth is a 6.0-litre twin-turbo W12 engine that produces a massive 600bhp and more than 900Nm of torque. With this, not only can one climb up a mountain, but also drive through it. A diesel mill might be in the pipeline. Autocar reports that only twenty cars will come to India and all of them have already been sold out. Deliveries are expected to begin in June.