With touchscreen infotainment systems not really luxury anymore, we explore the benefits and limitations of Android Auto and Apple CarPlay to help you decide whether you really need it 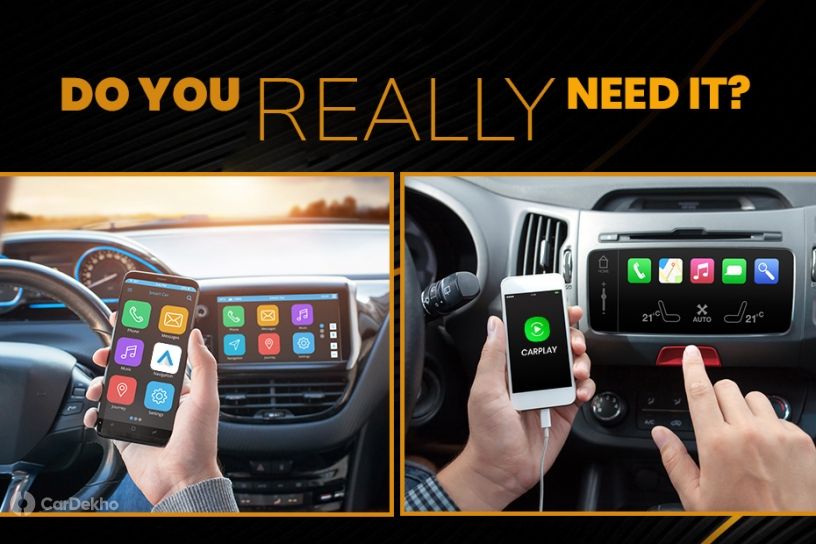 Up until a few years ago, a touchscreen infotainment system with Android Auto and Apple CarPlay connectivity used to be available only in premium and luxury cars. Now, however, the feature has become increasingly common even in budget models like the Maruti Alto and Datsun redi-GO. Of course, you’d still have to opt for a higher variant if you wanted one!

But before we dive any deeper, let’s find out what exactly is Android Auto and Apple CarPlay?

Simply put, Android Auto is a mobile software developed by Google to mirror the features of an Android device on a car’s touchscreen system. Basically, it allows you to access your phone’s apps, messages, notifications, music, and maps on the display setting on your car’s dashboard.

Why? Because it’s more convenient and safe. Apple CarPlay, too, performs the same functions, except that it’s designed by Apple.

So, what are their pros and cons? Read on:

Android Auto and Apple CarPlay get almost the same layout as smartphones, including the same fonts and icons, making it easier to use.

While a car’s touchscreen system does offer different applications for music or navigation, Android Auto and Apple CarPlay simply make it more convenient to use these. For example, you can use Spotify or YouTube Music via the car’s display instead of the phone (or the in-built player). So, there’s that freedom of choice for users.

Pro Tip: If you wish to use navigation, we recommend you opt for Google Maps instead of the one provided in your car. That’s because the former is a lot more reliable and easier to use.

Undoubtedly, one of the best features of Android Auto and Apple CarPlay is that you can use voice commands to run functions. That way, you keep your hands on the steering wheel (and eyes on the road).

You can also type in your command on the off chance the system fails to pick your voice instructions.

Yes, using Android Auto or Apple CarPlay is a seamless experience, but only when you have a solid internet connection. This means, they won’t function as well should you be travelling to areas with low network connectivity.

Moreover, you won’t be able to stream music online or use voice commands as both depend on a stable internet connection.

A significant drawback of using wired Android Auto or Apple CarPlay is that they will only work if your phone is plugged in at all times, regardless of whether the device is fully charged. However, there’s a gradual shift happening towards wireless Android Auto and Apple CarPlay as seen in some affordable offerings like the Renault Kiger and Nissan Magnite.

Sure, Android Auto and Apple CarPlay support a whole bunch of apps like Google Maps, Hangouts, Audible, and many more. It even displays WhatsApp notifications and those of standard messaging apps. However, it still can’t read your emails as there’s no support for Gmail yet.

So, you may wonder whether Android Auto or Apple CarPlay is really essential. Well, not really. That’s because it is simply a matter of increased convenience. They aren’t life-saving functions.

That said, while they aren’t must-haves as of now, they’ll certainly be along the way.