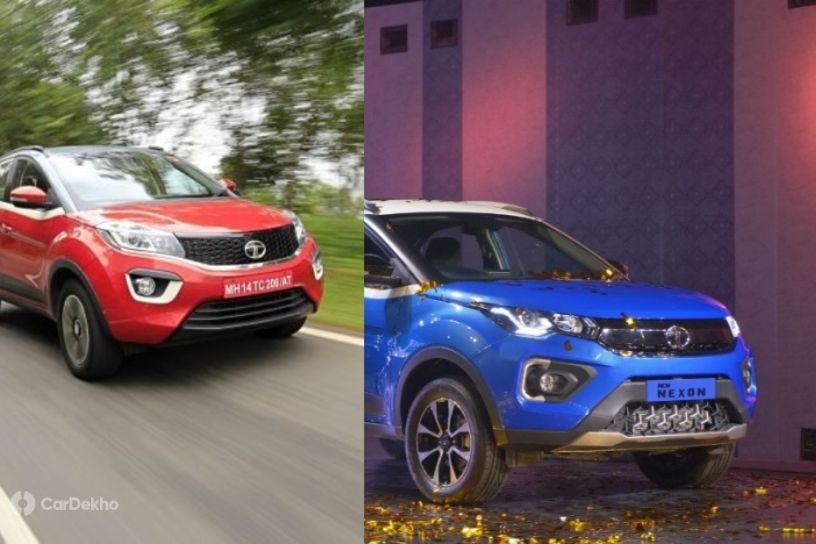 Tata recently launched the Nexon facelift in India. It gets new exterior styling, additional features, and a set of BS6 petrol and diesel engines. So, let’s compare the updated SUV with the pre-facelift version and find out what has changed.

The Nexon facelift gets an entirely new front. It now looks sharper thanks to the clamshell bonnet, headlamps, and a slimmer grille. Instead of the honeycomb mesh on the grill of the pre-facelift model, it now features a glossy black element. The facelift also gets a new front bumper featuring a unique tri-arrow pattern on the air dam and updated fog lamp housing with silver accents.

Not much has changed to the sides. It looks largely similar to the outgoing model except for the new alloy wheels and reimagined floating roof layout with new tri-arrow side body cladding. It’s the same story at the back as well with slightly tweaked tail lamps, which now feature a tri-arrow LED pattern and an updated rear bumper.

Like most of the exterior, the interior also remains largely similar to the pre-facelift model. The only visible change is the new dual-tone theme, which has a creamish white (earlier it was finished in silver) highlighted centre layer with a tri-arrow pattern. A similar pattern is present on the seat upholstery as well. The facelifted Nexon also gets a new flat-bottom steering, similar to the one seen in the Altroz.

As far as features are concerned, the Nexon now gets electronic stability program, traction control, hill start assist and brake disc wiping as standard across the range. These are being offered in addition to the basic safety features like dual front airbags, ABS with EBD, ISOFIX child seat anchors, and rear parking sensors.

Also new to the equipment list are features like sunroof, cruise control, tyre pressure monitoring system, automatic projector headlamps, digital instrument cluster (simple dot matrix display), and rain sensing wipers. Tata has also introduced IRA connected technology (telematic services) on the facelift. It offers features like geo-fencing, car locator, and a natural voice system compatible with Hindi, English and Hinglish. To keep things in check in hot weather conditions, the SUV also gets a unique Xpress Cool feature. When activated, it opens the driver side window and sets the AC temperature to minimum and the blower speed to maximum.

Although both engines remain the same as before, they have been updated to meet the new BS6 emission norms. The Nexon petrol is powered by a 1.2-litre turbocharged unit producing 110PS and 170Nm. The diesel Nexon, on the other hand, gets a 1.5-litre unit generating 110PS and 260Nm. Both engines are offered with either a 6-speed MT or a 6-speed AMT as before.

Also Read: Tata Nexon EV To Be Launched On January 28

Nexon petrol now having 120PS power as per other channel but you are showing 110PS here :)

1, very safe car 2, i love the steering response both in city and extremely good on highway, i am 60yrs bt love D power boost in Sport mode, 3, City mileage is a down side but highway i gt 20 ON hiway