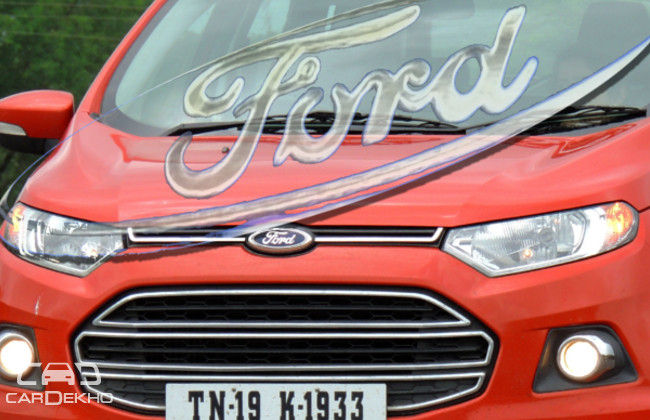 An automobile is an automobile only because it moves without utilizing human or animal power and therefore it is a given that the engine, i.e. the powerplant is the most important part of the automobile. In the preceding part of this series on the modern gasoline engines “Power with finesse – Volkswagen Vento TSI” it was discussed how, in the Indian context, the combined effect of steady increase in consumer price of diesel and introduction of highly efficient and powerful small capacity forced induction gasoline engines may lead to renewed consumer interest in gasoline powered cars. It was in the context of the modern turbo-charged gasoline engine that cardekho.com decided to check out the highly acclaimed Ford Ecoboost engine.

The silken smooth power delivery characteristic of gasoline engine is addictive but when faced with the smallest version of the famous Ford Ecoboost engine which happens to be a three cylinder sub one liter engine, the first thought that came to mind was whether the three-pot would be so jerky and rough running so as to spoil the party. Well, to know the answer read on.

Ford’s Ecoboost engines come in different cubic capacities and barring the smallest one – the one that is being featured in this article – all are all aluminum affairs. The one that is installed in the Ford Ecosport, the immensely popular urban SUV, is the three cylinder 999 cc turbo-charged, twin variable camshafts, direct injection gasoline engine. This physically diminutive engine is built out of cast iron block which is said to be small enough to fit on an A4 size paper. The amazing part of the story is the power which gushes out of this explosive engine – one hundred and twenty-three thoroughbred horses (123 bhp @ 6000 rpm). To put the power output in perspective I would simply point to the fact that the modern normally aspirated 1.1 liter Suzuki K series engine which is bigger in terms of cubic capacity makes just more than half the power and the turbo-charged Volkswagen 1.2 liter TSI engine falls short by almost fifteen percent despite having twenty percent higher cubic capacity.

Readers must be wondering whether Ford has found the mythical genie and put it in this little piece of dynamite. No, the answer lies in the holistic approach of Ford to develop this engine for maximum power output along with the necessary emission reduction and engine longevity. This beautiful piece of engineering is built out of cast iron to improve the warm up time which is quite important in urban settings where a typical drive cycle may not be long enough for the engine to warm up sufficiently. Quick warm up is extremely important in such situations as optimal operating temperature not only increases efficiency and reduces emissions; it also lowers component wear in the engine. The turbo-charger in this Ecoboost engine is a low inertia unit which spools up very fast and provides boost right from the lower end of the power band – torque exceeds 17 kg/m @ 1400 – 4500 rpm. Direct injection in tandem with the two independently variable camshafts makes use of all the extra air pumped in the cylinders and the result is power output which would not be out of place in a typical modern gasoline engine having fifty –sixty percent extra cubic capacity and an extra piston to play with.

Now coming to the point about the smoothness quotient of this gem of an engine, Ford has addressed the inherently uneven firing three cylinder engine characteristic with a combination of purpose designed out of balance flywheel and front pulley which in effect counterbalance the vibrations. The result is an exceptionally quiet and smooth running engine which belies the fact that it is a three pot unit.

The only grudge that I have against this engine is that it is extremely difficult to exploit the enhanced efficiency to reduce fuel expenses. The surge of power is so addictive that reigning in the basic instinct to keep checking it out with the right foot is almost impossible to control and that doesn’t do any good to the all-important fuel efficiency figure. The figure that emerged after the rigorous real-life test cycle, which in this case extended to three weeks of extensive usage on almost all kind of terrain (with three or four adults always on board) and driven almost always at maximum speeds which the road and traffic conditions permitted was quite good; the fuel efficiency figure barely dipped below 12 km/l. This figure may not look very pretty, but let me hasten to add that it would be difficult to go below this figure save and except in densely populated urban areas where the car may be forced to idle for long durations and crawl in first gear in bumper to bumper traffic.

My usage was in Mumbai and Pune with high speed runs on the expressway and some exhilarating drives on sparsely trafficked but pothole ridden rural roads. Driven sensibly Ecosport with Ecoboost engine should return much better fuel efficiency figures. But the big question is - why would a sensible person opt for this engine if he or she doesn’t want to keep on savoring the addictive rush of power which gushes out of the fantastic powerhouse of an engine that Ecoboost is?

On the Mumbai-Pune Expressway, the potent Ecoboost propels the popular urban SUV to performance levels where the sub 4 meter Ecosport easily plays ball with much bigger and powerful full sized SUVs and Sedans and comes out on top with some deft maneuvering helped by the traditionally good handling characteristic of vehicles carrying the Ford insignia. Having said that, I must add that the higher ground clearance (200mm) and relatively short wheelbase has forced Ford to stiffen up the suspension in order to ensure optimal handling and stability and this has some deleterious effect on ride quality which is perceivable on the Expressway.

Mumbai-Pune Expressway is a rigid concrete pavement built more than a decade back. Comprising of a series of short concrete segments (longitudinally), the joints between the segments degrade the ride quality due to underlying unevenness and the tyre / suspension combo has to perform extra work. Ford Ecosport performs splendidly on account of a very powerful engine and handles well but the inherent compromise necessitated due to added ground clearance has meant that ride quality is a wee bit harsh. The upside is that Ecosport is not the least intimidated when faced with broken roads or crater sized potholes and a tight turning circle (5.3 meter) is a boon in congested urban areas.

As a vehicle, Ecosport comes across as a very smart set of wheels with distinctive styling and contemporary interiors; dashboard is driver centric and feels upmarket.

The signature Ford Emergency Assist is a useful feature and the welcome side effect of this particular feature is that phone connects (via Bluetooth) with the music system in a jiffy in a most hassle free fashion with added convenience of voice commands to operate the system.

I only wish Ford could make available the option of Ecoboost engine with Ford Powershift DCT gearbox (dual clutch transmission) on Ecosport. Readers may check out the impact of dual clutch transmission in an earlier article – “The Automatic Conundrum – Ford Fiesta 1.5 l”. The combination of Ecoboost and DCT would certainly raise the cost but performance and overall efficiency could see appreciable enhancement.

Coming back to the engine, Ford has employed almost all the tricks to enhance the efficiency of this engine. In addition to cast iron block, the cooling system has separate circuits for the head and the cylinder block. Separation of coolant circulation in the head which heats up faster and the cylinder block which takes longer to get to operating temperature reduces warm up time and thereby improves efficiency. The ECU controlled variable displacement oil pump (for pumping lubricating oil) and use of low viscosity synthetic 5W-30 lubricating oil optimizes lubrication and further improves efficiency.

The homegrown car manufacturer Tata Motors has also developed a turbo-charged gasoline engine – christened “Revotron”. In terms of power output Revotron is certainly not a patch on Ecoboost but Tata Motors has another trick up its sleeve –driver selected variable engine mapping which tailors the power delivery characteristics on the go. Readers may wait while cardekho.com checks out the   Revotron to find out how it measures up to Volkswagen TSI and Ford Ecoboost in real world condition.