Hyundai Aura vs Hyundai Xcent: Side By Side

How different is the new Aura from its predecessor? We find out

Update: Hyundai has launched the Aura at Rs 5.8 lakh (ex-showroom India). The sub-4m sedan is available with the 1.2-litre petrol and diesel engine options as well as the Venue's 1.0-litre turbo-petrol unit. Read more about it here. 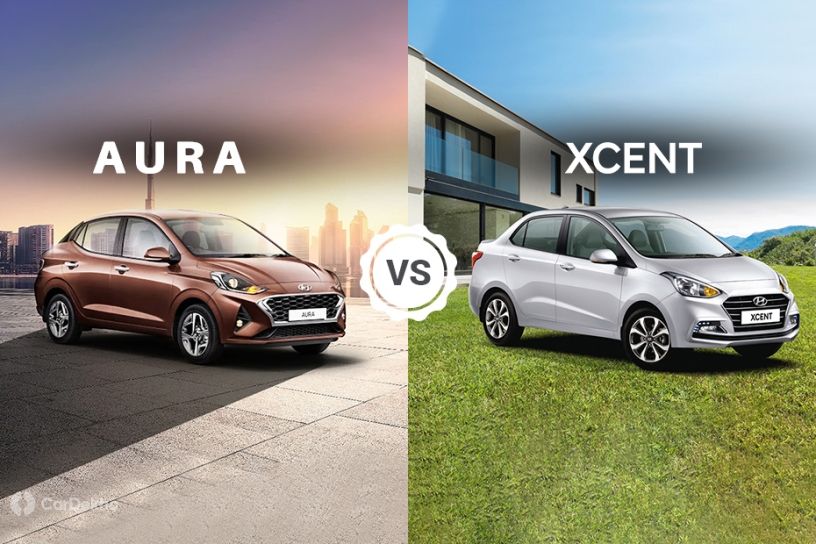 Hyundai India is all set to launch the Aura on January 21. However, it will continue to exist alongside its predecessor, the Xcent, but how different will the two be? We compare them side by side to gauge the differences.

The biggest changes are on the exterior -- in fact that’s the only change we’ve seen on the Aura. Unlike Xcent, the Aura gets a split-styled front grille with honeycomb mesh and blacked-out studs. The Aura’s projector headlamps are elongated at both ends -- looking similar to the Grand i10 Nios and more expressive than the Xcent. The fog lamps on the Aura are also projector units that are integrated into the vertical housing instead of the horizontal units. The LED DRLs on the Aura are on the inside corners of the grille instead of the far end of the bumper.

The Aura’s side profile is quite unconventional as there’s a mishmash of lines, curves and a sharply sloping roofline. Its predecessor had a slightly conventional three-box sedan form. The floating roof and blacked-out C-pillar on the Aura are quite different from the Xcent. The Aura gets new 15-inch alloy wheels, which look similar to the Venue. The Aura is as long and tall as the Xcent but is 20mm wider and has a 25mm higher wheelbase than the latter.

The tail section of the two cars is poles apart too. The Aura might retain the wraparound LED tail lamps like the Xcent but they extend further to the side panels and on the boot lid. The Aura’s C-shaped lamps are connected by two blacked-out strips and it gets a raised boot lid lip that mimics a lip spoiler. Another notable change is the lettering on the boot lid and the repositioned number plate, which rests on the bumper instead of the boot.

Hyundai hasn’t shown us the Aura’s interior but it’s likely to bear resemblance to the Grand i10 Nios with respect to the dashboard layout and feature pool. The Xcent’s interior’s base shade is black with beige on top while the Aura is expected to get a beige-heavy dashboard theme with support from the colour grey. The newer offering will also get some premium touches in the form of brushed aluminium accents, bronze-coloured inserts, and turbine-like AC vents.

The Aura’s features are going to be similar to the Grand i10 Nios. So expect equipment such as an 8-inch infotainment unit, wireless phone charger, and a 5.3-inch MID for instrument console over the Xcent.

Hyundai will be offering the Aura with three BS6-compliant engines: a set of 1.2-litre petrol and diesel engine from the Grand i10 Nios and 1.0-litre turbo petrol from the Venue. On the flip side, the Xcent still uses a BS4 version of the 1.2-litre petrol motor along with the previous 1.2-litre, 3-cylinder U2 CRDi diesel engine. The diesel unit is likely to be phased out in a fashion similar to the Grand i10 but Hyundai will offer a CNG option to the Xcent as well. Now, let’s take a look at the specs:

The Hyundai Aura will be priced in the range of Rs 6 lakh to Rs 9 lakh while the Xcent currently retails in the Rs 5.81 lakh to Rs 7.86 lakh (petrol top variant) slab.