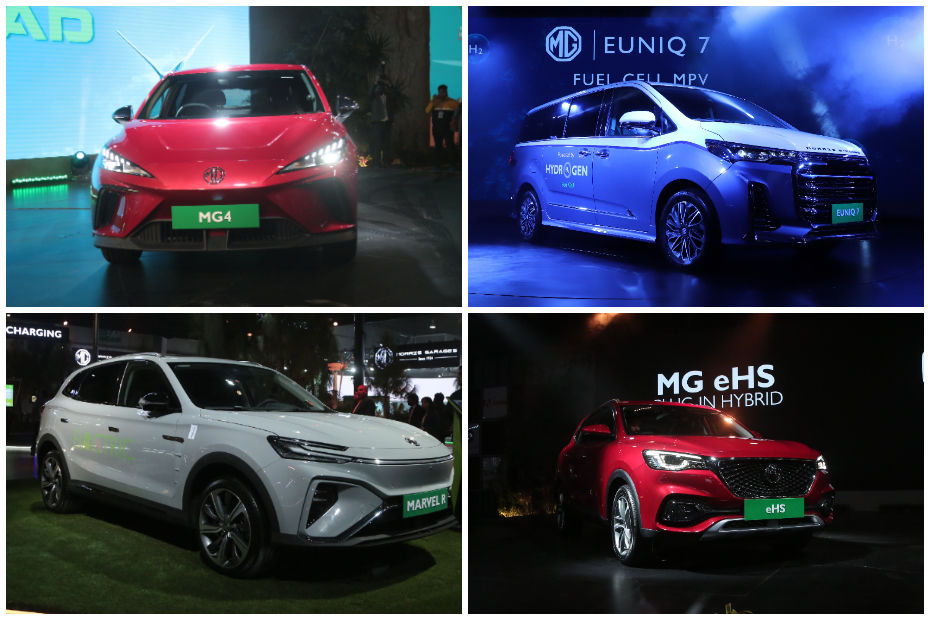 While a motor show is usually the stage for debuting concepts and future models, MG brought a lineup of production-ready electric vehicles and plug-in hybrid (PHEV) models to Auto Expo 2023. The carmaker then stated that all of these models, on sale in different markets globally, are being evaluated for the Indian market. Here’s a rundown on each of them, starting with the EVs:

The MG4 is one of the newest products based on the carmaker’s new modular platform. The mean-looking electric hatchback comes with two battery pack options: 51kWh and 64kWh for a range of up to 350km and 450km, respectively. The packs power an electric motor driving the rear wheels.

MG5, the first-of-its-kind electric estate in India, was also present at the motor show. It is one of the less likely candidates to be launched here as the estates are not a popular choice among buyers here. The 61.1kWh battery pack is good for a range of up to 525km.

The most impressive MG electric SUV on display was the Marvel R. Internationally, it comes with the choice of an all-wheel drive version featuring a tri-motor setup that makes 288PS and 665Nm. The Marvel R has a top speed of 200kmph and offers a range of up to 402km (WLTP).

MG’s full-size electric MPV, the Mifa 9, is bigger than the Kia Carnival. It is sold by one of MG’s sister brands in China, under the SAIC automotive group, with a 90kWh battery pack. The Mifa 9 is available in three variants and offers a WLTP-claimed range of up to 595km.

One of the top MG cars being evaluated for the Indian market is the eHS. The midsize plug-in hybrid SUV would be the first of its kind in India if launched. Internationally, the eHS comes with a 1.5 turbo-petrol engine that makes 162PS and 250Nm. It also gets a 16.6kWh battery pack that provides a claimed electric-only range of 52km.

The eMG6 is a sporty sedan, also powered by a plug-in hybrid powertrain. It can do the nought to 100kmph sprint in six seconds and gets advanced driver-assistance systems as well.

The MG eRX5 is another midsize electric SUV contender in the carmaker’s global lineup. It also packs ADAS and a plush interior packaged into distinctive body.

And finally, the Euniq 7, MG’s production-ready hydrogen-based fuel cell electric vehicle, was the last showcase from MG at the Auto Expo 2023. It uses MG’s third-generation fuel cell technology, PROME P390, and gets a 6.4kg hydrogen tank. This tank can be refuelled in three minutes and the fuel cell-powered MPV offers a range of 605km.

Which of the above-mentioned MG models would you like to see in India? Let us know in the comment section.