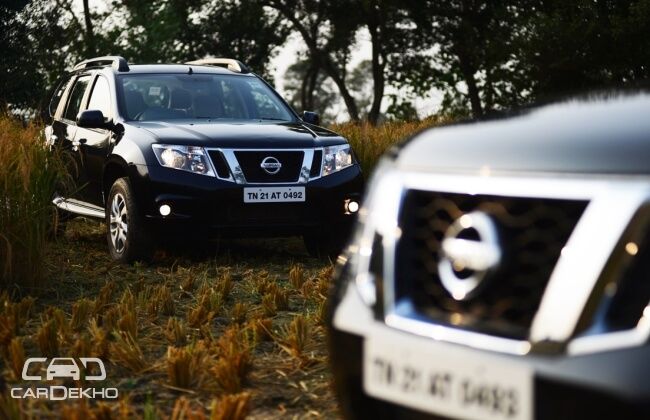 Its been a year since Nissan launched the Terrano in India, then why are they calling us again for a drive? This was an instant question that popped up in my mind. It can't be the AWD variant as they have already mentioned the launch in middle of next year. So is it the new anniversary edition with head-up display, but again, its a limited-make to just 450 units. So what is it? Post all this confusion, a mail came, explaining what this drive is all about. On the successful completion of Terrano's first year, Nissan wanted us to join them for a short spin to the hills in Himachal Pradesh through the beautiful land of five rivers- Punjab, and named the whole the journey as 'Son of the Soil' experience.

Though the flight was at 9.00 AM, I had to leave my place by 6.30 on a cold-hazy morning, thanks to the fact that I live a good 55 kilometres away from the IGI airport. The one-hour flight landed us to Sree Guru Ramdas Jee International Airport in Amritsar and my excitement level was on high. So starting from my home in Haryana and taking the flight from the national capital Delhi, I was in Punjab now. The land of five rivers, famous for its food, language, culture and above all the flamboyant people.

After a quick bite and a short briefing about the drive and its route, we were all set to march towards the Himalayan foothills via the exploration of beautiful lands of Punjab. We had eight Terranos lined-up in the parking area of the Raddison Blu hotel waiting for us for the flag-off. As it was an odd 300 kilometres drive, comprising of plains as well as hilly terrains, two journos were allotted with one Terrano, as they could enjoy the journey with lesser fatigue. I got the D3, wrapped in black shade, and mind you, it was the only Petrol car in the whole fleet. And another exclusivity, I was the only one, who drove the car alone for the whole journey, because the other D3 journo had missed his flight.

Post the flag-off, we began our sojourn from the Golden Temple city towards the 'Punjabiyat' resort in the Gurdaspur district, about an-hour or 65 kilometers away from there. With an Innova sporting a 'Support Car 3' sticker following me, the hotel disappeared out of the rear view mirror. Cruising through the single-lane roads (what they called a highway) of Punjab's scenic countryside, the Terrano didn't let me down on a single instance. It was quick, nimble and very comfortable through all the terrains coming its way. The real test for Terrano started when we shifted to a muddy side road that would lead us to Punjabiyat, a farmland resort with rather luxurious mud house accommodation and expanses of fields of sugarcane and wheat, that was to be the location for a late lunch.

While at Punjabiyat we were served with mouth-watering authentic Punjabi cuisine including the very famous- 'Sarso da Sagh' and 'Makki di Roti,' that to seated in the fields on 'Charpoys.' It was a true bliss! Through Punjabiyat, we spoiled city folks got a chance to interact with the nature so closely, and escape from the busy city lifestyle at least for some time. Where those local people trust their bulky tractors (well, I tried my hand on it too) in such tough off road conditions, the Terrano felt as though it was at home cruising over dirt and sand without a glitch.

We left Punjabiyat as the evening set in and still had a lot of distance to cover. After Punjabiyat's 'Kaccha road' the Terrano got on to a four-lane highway heading towards the beautiful hills of Dharmashala. The road was super-smooth, unlike the earlier route we chose. With all these scenic places around and a fantastic vehcile to compliment it, the haywire road sense of people came as an undesired gift. People coming on the wrong side, that too at good speed, would stare at you as if you are coming on the wrong way.

After lurking out from that crest of nature, on top of our heads was to reach Palampur before dusk spawned to its darkest form. Finally, we made in time to the breathtaking view of Taragarh palace, which accosted us with cocktails and dinner. Next day our eyes opened to a chilly and foggy morning. Everybody assembled in the lobby area for a morning dose of coffee and sandwiches, before the amazing breakfast waiting for us at the Norbulingka Tibetan Institute.

The sacred place was about 35 kilometres away from the hotel, and has been up by Dalai Lama himself, replicating the Norbulingka Monestary in Tibet which was invaded by the Chinese. The short journey to the Monestary was amazing. We all went through the winding roads of Palampur, and it was on this leg that the awesome majesty of the Himalayas finally shone through with the Terrano adding a spark to our drive. We saw the morning sun glistening off the Dhauladhar range, and that alone made the earlier day's long driving and restricted sleep entirely worth it.

I tried to stretch and test the limits of the Terrano as much as I could, but the Japanese SUV never screeched or said 'No,' nor left me disappointed in any aspect, be it comfort or driving dynamics. It seems like a really sophisticated suited and booted vehicle, but take it off road or through any rough terrain, it dodges everything like a warrior.