Toyota Reveals The LC300 Land Cruiser And There’s Even A Performance Version! 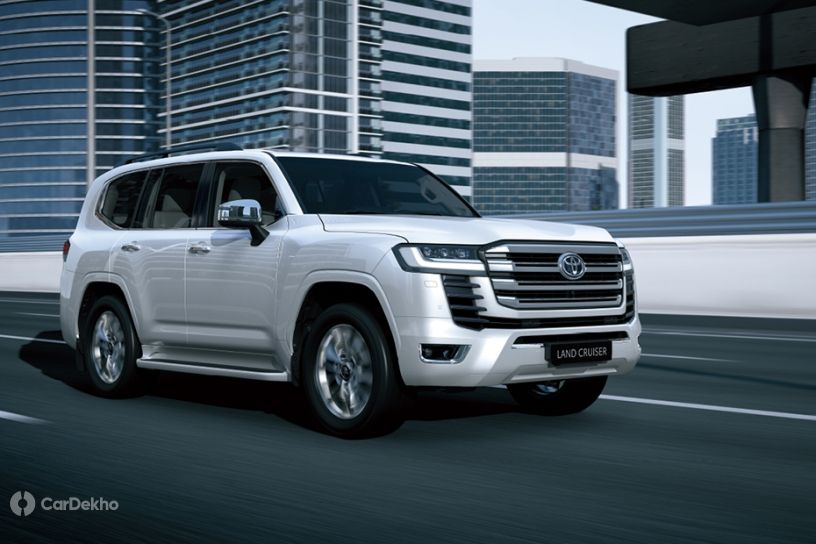 The Toyota Land Cruiser has entered into its sixth generation. Don’t be fooled by its appearance. It might look a little bit like the outgoing model but it is a whole new beast underneath. And considering Toyota has pretty much changed everything, let’s take a look at what all is new.

The Land Cruiser retains its boxy look and huge size, however Toyota has worked on its face. The headlamp design, while still rectangular, has become sleeker. The grille retains the same horizontal chrome slats, but is now bigger. Consequently, the bumper has been restyled and has gotten bigger to accommodate the changes, and the face of the car now looks, you guessed it, bigger. At the back, the tail gate looks even more upright than before, and the taillights have also become sleeker. In its profile, the Land Cruiser continues to look like a huge boxy SUV.

Toyota has even revealed images of the Land Cruiser with a whole new front end that features a blacked-out honeycomb grille, different wheels and tyres. The Japanese carmaker hasn’t revealed too much about it yet, but the Land Cruiser will also be available in a  Gazoo Racing guise. For the uninitiated, Gazoo Racing is Toyota’s performance division that is responsible for cars like the GR Yaris, and the 2021 Land Cruiser will be the first time a GR badge will be put on a Toyota SUV.

The similarities between the outgoing and the new-generation Land Cruiser might make you believe that not a lot has changed underneath, but that’s where you would be wrong. The LC300 Land Cruiser sits on a new GA-F platform, part of the latest TNGA (Toyota New Global Architecture) family. This resulted in the Land Cruiser shedding 200kg of weight, and achieving a lower centre of gravity. Not only that, it now gets better basic suspension performance and improved weight distribution.

As far as powertrains go, Toyota has ditched its host of naturally aspirated V8 and the sole V6 petrol engines, and is instead offering twin-turbo V6 engines (both petrol and diesel). The diesel V8 has also been ditched in favour of a V6. Take a look at the numbers below.

Toyota also revealed in its press release that a naturally aspirated petrol engine and a 6-speed AT will still be available in some regions, although it didn’t specify which.

One of the complaints that people had with the older Land Cruiser had been the dated interiors not befitting of a vehicle with an premium price tag. Those of you expecting a whole new cabin will be happy, as Toyota has done just that. While the dashboard layout stays relatively simple, the cabin now has a far greater visual appeal due to premium-looking elements. The touchscreen is now a free-standing unit, and the controls on the steering and in the centre console are decked in black, surrounded by silver. The overall cabin is done up in a dual tone shade of black and beige. There are still some old-school elements like the analogue instrument cluster, which will be appreciated by long-term fans of the Land Cruiser.

While Toyota has given the Land Cruiser new engines, transmission and chassis, it has assured the world in its press release that the Land Cruiser’s legendary off-road capabilities remain intact. In fact, it has added two new features that will aid it in its conquest of going off-road.

The first is the E-KDSS (Electronic Kinetic Dynamic Suspension System). The previous Land Cruiser also got it, but in this new-gen model, the system is electronically controlled. It basically allows for better wheel articulation, so that the tyres are always touching the ground in tricky off-road situations, allowing for better traction. You now also get a Multi-terrain monitor which showcases obstacles from a driver’s point of view. It is not yet clear what this feature actually does, but we expect it to display hidden obstacles in your path on the touchscreen. Lastly, there is the Multi Terrain Select feature that automatically selects the best off-road settings for the kind of terrain you are travelling on.

The Land Cruiser has always been one of the safest cars on the road. It previously came equipped with 10 airbags, multi-terrain ABS with EBD, pre-tensioners for second-row seatbelts, vehicle stability control, traction control, hill-start assist, crawl control and even adaptive cruise control. You will now also get the Toyota Safety Sense active safety package that consists of features like the  pre-collision system that helps in avoiding a collision or reducing its impact. This is basically a feature that detects pedestrians and cyclists, and can partly even work at night. It’s even capable of detecting cars approaching an intersection that you might have missed. Another feature addition is the Parking Support Brake, which helps small crashes in parking structures by recognising structures in front of the car as well as behind it.

Is it coming to India?

That’s the million-dollar question. Toyota has already discontinued the Land Cruiser in the US due to poor demand, and there were rumours before this new-gen model was revealed that it could be killed altogether. However, a huge demand for this SUV in the middle east means that Toyota rewarded us with this new-gen model. As far as sales are concerned, Toyota has revealed that it will go on sale globally in the summer, which is basically upon us.

So is it coming to India? Yes, Toyota has confirmed that it will bring the new Land Cruiser to India. However, there is no set timeline and we don’t expect it on our shores before December 2021. And when it does come, we expect it to be priced between Rs 1.5 crore and Rs 1.8 crore (ex-showroom) as it will be brought in via the CBU route, just like its predecessor.

Toyota
VIEW ALL
D
Published by
Was this article helpful ?