The factory-built rally-prepped sportscar is limited to just 2,500 units across the world 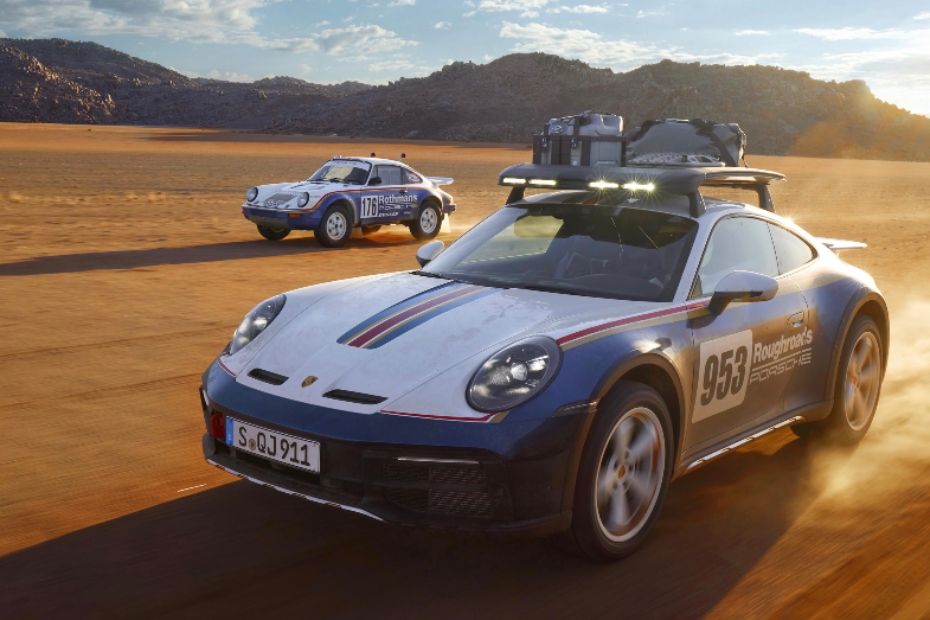 Porsche has revealed the Dakar edition of its 911 sportscar. The limited-run 911 Dakar celebrates Porsche’s first overall victory in the 1984 Paris-Dakar Rally. It’s not just a cosmetic upgrade but also gets some serious off-roading changes.

The 911 Dakar, maintaining its iconic coupe silhouette, gets aluminium red tow lugs, wider wheel arches, bigger Pirelli Scorpion Plus all terrain tyres, protective stainless steel bits on all sides. That rear wing at the back is from the 911 GT3. There’s a Rallye Design package as well paying tribute to the original Rothman’s livery, with an exclusive White/Gentian Blue shade and an individual race number ranging from 0 to 999.

The lifted 911 uses a 3-litre twin-turbo six-cylinder engine tuned to deliver 480PS and 570Nm. It’s paired with an 8-speed gearbox distributing performance to all four wheels. The off-road sportscar can achieve the 0-100kmph run in 3.4 seconds flat. The top-speed has been electronically limited to 240kmph, due to its all-terrain tyres.

While the regular 911’s all-wheel drivetrain is set up for tarmac, the 911 Dakar’s has been tuned for handling things off the road. Other electronic aids include rear-axle steering and new exclusive driving modes: Rallye and Off-road. The Rallye mode gets a rear-biassed all-wheel drive which is ideal for loose and uneven surfaces. The off-road mode is best suited for maximum traction on more difficult terrains.

Changes to the chassis have also been made for appropriate driving dynamics. Its bigger tyres have helped increase its ground clearance by 50mm. There’s a ‘High’ level lift setting which once activated, lifts the front and rear by another 30mm, and can maintain that clearance at speeds of upto 170 kmph. With more space underneath the car, challenging terrains should be easier to tackle.

The Porsche 911 Dakar will soon be rivalled by the Lamborghini Huracan Sterrato. It’s unlikely to come to India but that extra ground clearance would be well-suited for our broken roads.