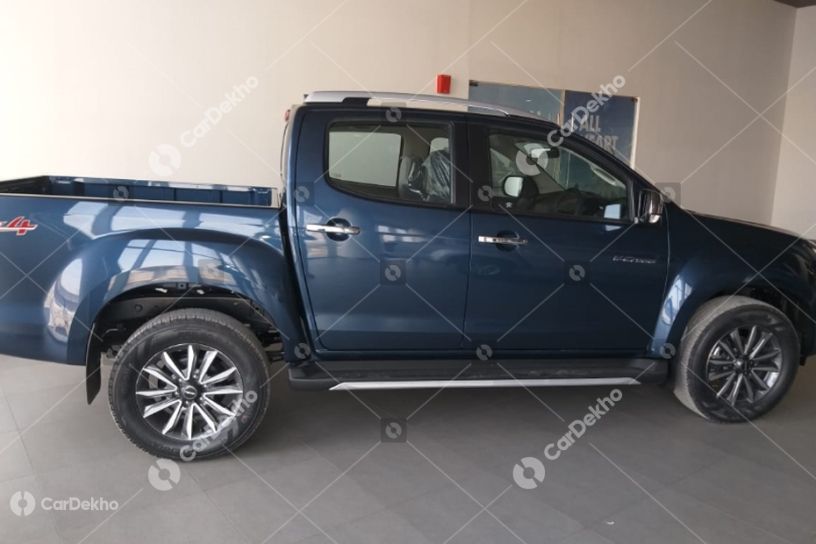 After being out of action for nearly a year, the Isuzu D-Max V-Cross is set to make a comeback in its BS6 avatar. The model has started arriving at showrooms ahead of its likely launch in April.

We can see two D-Max pickup models, one finished in blue while the other in silver. By the looks of them, it appears that the silver-coloured model is likely to be the lower-spec variant, thanks to a few giveaways like the absence of side steps and roof rails and the steel wheels with covers. However, no changes seem to have been made to the overall design of the BS6-updated model.

You can also spot the dDI badging at the back of both models, suggesting that Isuzu will equip the BS6 D-Max with the 1.9-litre diesel engine as before. In its BS4 guise, it belted out 150PS and 350Nm, mated to a 6-speed automatic gearbox. While this transmission is confirmed by the image, there is also the possibility of a 6-speed manual being offered alongside. The 2.5-litre diesel motor (134PS and 320Nm) provided in the BS4 model earlier is unlikely to feature on the BS6 version.

One of the images offers a glimpse into the pickup’s cabin. The interior is almost identical to the BS4 model; we have the same touchscreen infotainment system (likely to miss out on Android Auto and Apple CarPlay), steering-mounted audio controls, and auto AC. It will likely carry forward features such as push-button start/stop, cruise control, and a powered driver’s seat. On the safety front, the pickup should continue with dual-front airbags, ABS with EBD, electronic stability control, traction control, and rear parking sensors.

Isuzu had priced the BS4 D-Max V-Cross between Rs 16.55 lakh and Rs 20 lakh (ex-showroom) towards the end of its lifecycle. The BS6-updated version is expected to be priced at a lakh more. The D-Max pickup has no direct rival in India.