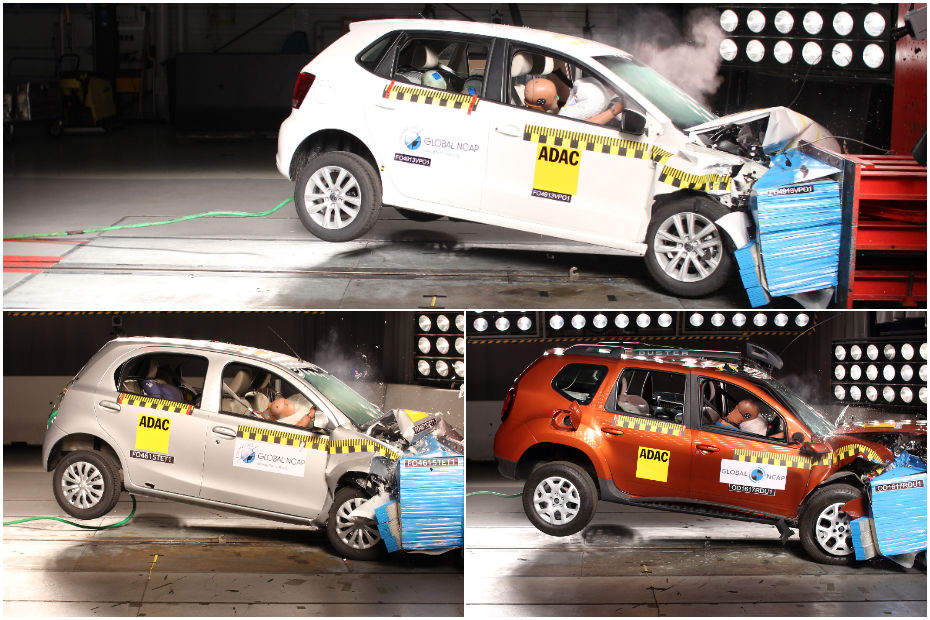 While several newly launched cars boast of high crash test safety ratings, some discontinued models can flaunt the same. While crash test ratings have been gaining importance of late, almost until recently, cars sold in India were rarely tested for safety. Heck, many did not even come with a basic kit like rear parking sensors or dual front airbags.

So, if you are looking to purchase a pre-owned car, but also want a model that will keep you and your family safe, here are your top options:

The VW Polo tops the list, securing four stars for adult occupant protection and three for child occupant protection. The hatchback’s bodyshell integrity was rated stable and it was the first car to be tested for the Indian car market. At that time, it was equipped with dual front airbags as standard, while higher variants got ABS. Later, it got seat belt pretensioners, rear parking sensors, EBD and ISOFIX anchorages.

Check Out Good Examples Of Used Volkswagen Polo In Your City

The Toyota Etios Liva, got four stars for adult occupants’ safety and two stars for child occupants’ safety. The bodyshell integrity of the car was rated stable and it can withstand further loadings beyond 64kmph. At the time of testing, it came with dual front airbags and front seat belt pretensioners as standard. Later, the hatchback was updated with ABS with EBD and rear parking sensors, also standard. The Liva was basically a hatchback version of the regular Etios sedan, so the latter was also a four-star rated car.

Check Out Used Toyota Etios Models In Your City

It was the first Tata car to receive a good safety rating, shortly followed by the Tata Nexon. The Zest was first tested without any airbags, wherein it got zero stars. However, with standard dual front airbags and a seat-belt reminder for the driver, it received four stars for adult occupant safety and two for child safety. When it was discontinued, it came with rear parking sensors and ABS with EBD as standard. However, the Zest’s bodyshell integrity was rated unstable.

The Ford Aspire received four stars for adult occupants’ safety and two for the child occupants’ safety. However, its bodyshell integrity was rated unstable. The Aspire was basically the Figo’s sedan version and being based on the same platform, the hatchback also got the same rating. The Aspire, at the time of being tested, came with dual front airbags and ABS with EBD as standard. The top-spec variants came with six airbags, electronic stability programme, hill launch assist and traction control. It was the most affordable car at that time to get six airbags, a feature that was usually seen only in high-end cars.

Check Out Used Ford Aspire In Your City

The Honda Mobilio was the first MPV sold in India to get tested and it secured three and two stars for adult and child occupant protection, respectively. Honda didn’t offer dual front airbags as standard and thus the base variant received zero stars. However, the top variant with dual front airbags, ABS with EBD, front seat belt pretensioners, and driver seat belt reminder fared well. The MPV’s bodyshell integrity was rated stable and capable of withstanding further loadings.

The Duster received three stars for adult occupant protection and two stars for child safety. The mid-spec variant was crash-tested as the carmaker didn’t offer airbags as standard. The unit that was assessed had ABS with EBD, driver’s side airbag, ESP and hill-start assist. However, the bodyshell integrity was rated unstable. Here are some examples of used Renault Dusters in your city.