Audi seems to be on a roll. After the all-new A8 was spotted testing, the new generation RS5 has now been snapped doing the rounds at the Nurburgring. 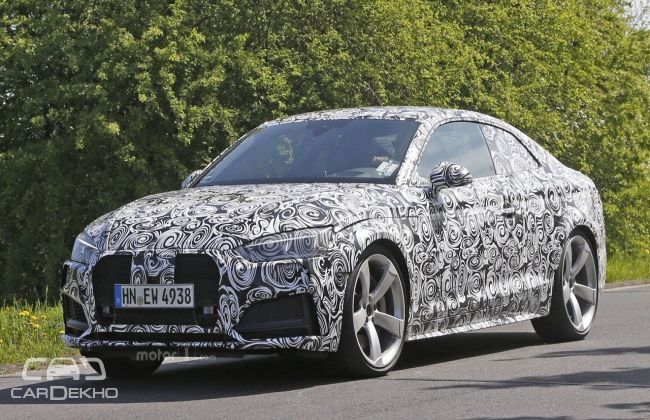 For the uninitiated, the 'RS' models are the mad hatter versions of everyday Audis. We've had a ton of fun with the RS5's elder cousin, the RS6 - you can read about it here. Naturally, the new RS5 will be based on the A5 coupe, which, in turn, is based on the new Audi A4 that will make its India debut later this year.   RS design traits are clearly visible with this iteration of the RS5. It gets an angry face, XL-sized air intakes, massive wheel arches, and a gorgeous set of alloys. It gets a subtle lip spoiler on the boot and not so subtle quad exhausts which, again, are trademark RS elements. There's no scoop on the interiors, but we expect it to borrow heavily from the Audi TT’s cockpit in terms of gadgetry.

A meaner version of the S5 Sportback we drove a month ago, the RS5 is expected to feature an all-new engine as well. Audi is likely to dump the 4.2-litre V8 engine for a more eco-friendly twin turbo 3.0-litre V6. Rumors suggest that this motor would produce around 450PS of power. The power figure is identical to the current generation, but we will definitely miss the glorious exhaust note of the V8 monster. The new engine is likely to power the RS4 and the new R8 in the future.

The German automaker will officially unveil the RS5 for international markets late next year. Now, Audi India already sells the RS6 Avant and the RS7 here. Will they launch another RS model in the country? Only time will tell. That said, we won't be complaining if they did!