‘What’s the point of it?’ I thought to myself, as I set the alarm for 4:30 am. ‘Alarm set for 3 hours and 22 minutes from now’ flashed a little black bar at the bottom of my cellphone screen. Fast forward to 5:00 pm, on the drive back home. ‘It makes sense. Not perfect sense, but it does.’

Right then. The Audi S5. On paper, it is neither as docile as the A range of cars from Audi nor as bonkers as the RS ones. It is supposed to be a concoction of practicality from the everyday cars, with a dash of performance from the weekend toys. Is it?

How does it look? 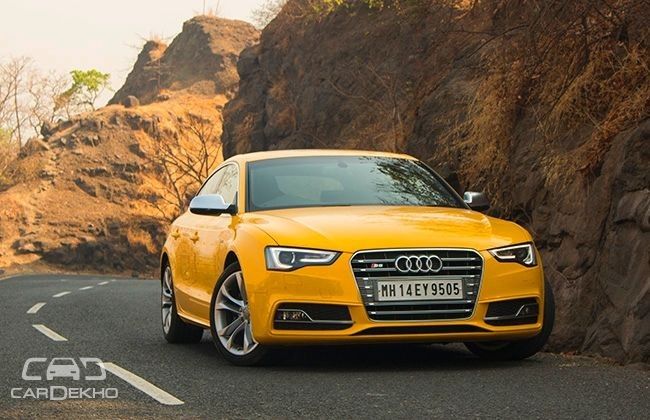 If our test car hadn't borrowed color from an alphonso mango, it wouldn't have grabbed as many eyeballs. Over the years, the design directive for the 'S' lineup has been rather simple. Be the proverbial wolf in sheep's clothing. Be covert, blend in and let the engine do the talking! Clearly Audi forgot this when they painted this particular one. As expected, the S5 turned a lot of heads. If being the centre of attention is on your bucket list, make sure you opt for a loud red, a flashy blue or even this unapologetic yellow. Most of you will call it a slightly flashy A4. We don't blame you - it is. For all practical purposes, the S5 is the same size as the A4. It's just the right size honestly. It isn't intimidating in any manner. In fact, you can jump in, drive off and feel confident about where the four corners of the car are.

The design is typically Audi. The curves and creases are minimalistic. It gets a large, open-mouthed grille, LED daytime running lamps and some lovely looking 18-inch wheels. If the large wheels didn't give the sporty pretensions away, the S5 gets subtle albeit noticeable bits like the lip spoiler and quad exhausts that stamp the fact that it means business. The S5 is a four-door, unlike the mental RS5. The Sportback design means that the roofline slopes into the rear in one clean sweep. Overall, it makes for a clean and understated silhouette. The trademark differentiators are in place, though. The platinum finish on the hexagonal grille, brushed aluminium on the mirror caps and a garnish of S badges is hard to miss.

While the design is clean, there's no novelty in there. It feels like a mix and match of bits and bobs from different Audis all stitched together around the profile of the S5. We aren't complaining. But, Audi, we think you've taken the family look a bit too far.

What about the interiors?

There are a few 'Look at me, I'm sporty' bits. The flat-bottom steering for instance. It is wrapped in leather and is just the right size. Then there are splatters of carbon fiber on the centre console and the doors, which look cool. You get a different instrument cluster and a gear knob from the RS5 with 'S5' stamped on it too!

The front half gets an extremely busy centre console that is full of buttons. The slab-sided dash houses a rather small, 7-inch screen that acts as the display for the navigation, reverse camera, music system and the drive select as well. The CD player and the dual zone climate control interface sit right below. The barrage of buttons around the gear lever does seem confusing at first. Fiddle around a bit, and you will get used to it in no time. While on the subject, let us point out that using these buttons on the move, is a task in itself.

The test car came equipped with something Audi calls 'Super Sport Seats' upholstered in top-class Napa Leather. It's an option we highly recommend you tick on the list. The seats are super supportive and hug you tightly. They don't let you slide around even under hard cornering or braking. The seats are easily my favorite bit on the S5. I wish I could say the same about the rear bench, though. With the front seat set to my driving position (which is usually all the way back and as close to the floor as possible), I could barely fit in the rear seat. Legroom is severely limited. Moreover, the headroom isn't all that great either. The oh-so-pretty sloping roofline eats into the headroom for the rear occupants. If you are a six-footer like I am, the car's roof will be your new best friend.

To sum up, the interiors are standard Audi fare. That's about it. The changes are minimal here too, and we'd forgive you if you thought there were none. Yes, it does look similar to many other Audis. But hey, why change something that's not broke? That said, it could use a fresher looking design like the Q7.

When I drove the RS6 Avant last year (you can read about the shenanigans here), I had a silly grin plastered across my face every single time I went near the throttle. The S5 in comparison isn't even remotely as jaw-dropping, neck-snapping or gut-wrenchingly fast, but it does just enough to make you smirk. It was when traffic was a little speck in the rear view mirror did I realize that the whole point of the S5 was usability. You see, when you are the helm of a 500bhp+ monster, especially in a country like ours, it is hard to utilise all of the power. For the S5, Audi has chucked out the old naturally aspirated V8 engine for a more polar bear friendly V6. The icing on the cake is the supercharger strapped onto the 3.0-litre motor. The result is 333bhp of pure, usable power! Audi claims the S5 will clock 100km/h in 5.1 seconds and go on to hit a top speed of 250km/h.  We can confirm. It does it without breaking a sweat. The figures aren't astronomical, I agree. But, it's all that you'll ever need.

The S5 gets Audi's Drive Select system - that lets you alter its behavior. One can choose between Efficiency, Comfort or Dynamic mode. You can also set it to Auto and let the car figure out the best setting by itself. If you think you are smarter than it, there's an Individual mode as well. This mode lets you tailor the engine, suspension, and steering as you like. Trot about in the Efficiency or the Comfort mode and it behaves like any other big Audi. Throttle response is dull, and there's no sense of urgency at all. The suspension too softens up and absorbs most of the undulations on the surface. The downside is that the ride becomes slightly bouncy at high speeds in either of these modes. If you intend on going for a calm cruise, these modes are the ones to pick.

Set the drive select to Dynamic however and the wolf suddenly comes to the fore. The suspension stiffens, the steering weighs up, and the engine is now in the mood to sing an opera. Shifts occur only at the 6,500rpm redline in this mode. The quad exhausts bellow and scream, which the cabin sadly cuts out. You are treated to a nice, throaty, and raspy note from the engine instead. Be warned, this note can be addictive. I pinned the throttle down to the floor whenever I got the chance, just to hear it sing. The 7-speed, dual clutch S-Tronic unit does a brilliant job of harnessing all of the 440Nm of torque. The shifts are lightning quick, especially when you're using the paddle-shifters. It is among the key things that lend the S5 its split persona. For example, it will shift up to 7th gear at 70km/h or hold onto 2nd up to 100km/h depending on how heavy your right foot is. The gearbox is fantastic. Almost makes you not miss a manual transmission.

The S5 gets Audi's 'Quattro', all-wheel drive wizardry too. The result is that the car grabs onto the road like a leech! You can be a silly 10-year old with the throttle and the steering around a set of twisties - the car will make up for your buffoonery. It is rather funny that it is easy to drive this car fast. The only bit that lets you down is the steering. It feels vague and keeps you guessing as to what the front wheels are doing. In Dynamic mode, the steering is a bit too stiff and heavy - you end up wrestling it trying to get the S5 to turn into a corner. In isolation, the steering isn't all that bad. But, it does feel like a misfit in a car that has a sorted chassis, brilliant suspension, and a potent motor.

Can one use it as a daily driver? Yes! Just be careful about the low nose around small hillocks local authorities call speed breakers. The S5 managed to scrape its underbelly on a few occasions. When driven with a light foot, the S5 returned a respectable 12.5km/l to the litre. Use all of the 333 horses, however, and the efficiency will drop to single digits in no time.

The S5 carries a sticker price of INR 63 lakh (ex-showroom). Tick some options on the list, pay for registration and insurance - you are effectively looking at an outlay of close to 75 lakh. What you get in exchange for that money is a punchy V6 motor, a plush interior and an added dose of practicality. It has virtually no competition either. No other car offers that combo, for that kind of money. If you need to be a sensible dad on the weekdays and Mr. Fast Laptimes over the weekend, the S5 fits the bill. Weirdly, it fits the bill only for that specific case. Like I said, ‘It makes sense. Not perfect sense, but it does.’