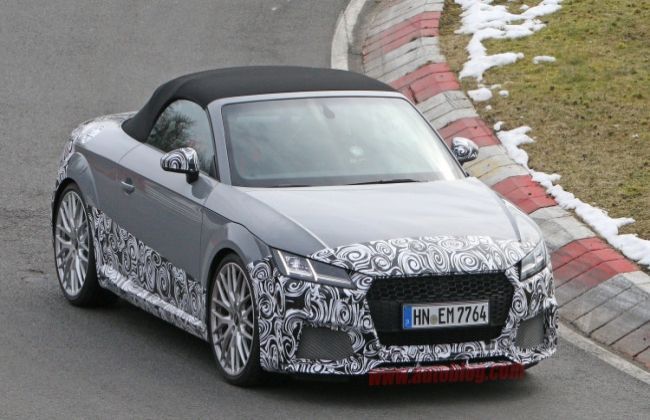 The all-new Audi TT RS cabriolet has been spied testing at the Nurburgring race track. The car being tested is the German automaker’s all-new front-engined convertible sports coupe, which incorporates the same 2.5-litre 5-cylinder turbocharged petrol powerplant seen in the international models. But the unit has now been re-tweaked to deliver 400 PS of peak power output and 550 Nm of torque.

There has been no official word by Audi on whether or not it will introduce this iteration of the Audi TT RS cabriolet in Indian markets, which is why this re-tuned powerplant will only assist this convertible in taking on its rivals such as the BMW Z4 and Mercedes AMG SLC43 in the international markets.

Other expected mechanical enhancements might include Audi’s all wheel drive system (Quattro), which will be paired to either a six-speed or an eight-speed manual transmission, making this TT ideal for someone who likes to throw his car around a race track. For those, who prefer a much more comfortable driving dynamic, it is also expected that Audi will offer the new TT RS with an optional S-tronic dual-clutch automatic gearbox.

Seeing how this car is a cabriolet, one must talk about its roof. The all-new TT RS features an electrically powered canvas roof-top. This also poses the necessity for one to understand that, with a convertible soft-top, the automaker is required to reinforce the structure of the car so as to provide it with the rigidity that has been compromised due to the lack of a fixed metal roof. This results in the car becoming heavier than its coupe counterpart.

All in all, this edition of the Audi TT RS looks quite menacing, courtesy of its bigger alloy wheels, large air vents, redesigned bumpers, oval tailpipes, rear diffuser and new single-frame honeycomb grill.