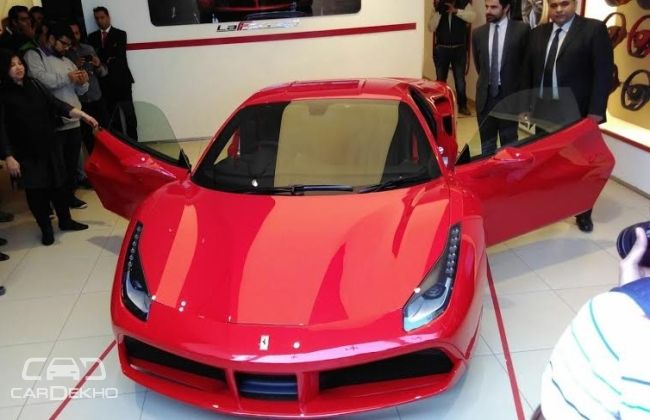 Ferrari has launched the much talked about 488 GTB in India. Priced at INR 3.88 crore, the 488 is a successor to the iconic 458 Italia and Ferrari’s second turbocharged offering in recent times, post the California T.

Powering the 488 is a twin-turbocharged 3.9-litre V8 engine which is capable of churning out a total of 661 horses – a crazy 172 bhp per litre of displacement and 99bhp more than the iconic 458. Power from the mighty engine is channeled through a revised 7-speed dual-clutch gearbox derived from the 458. It also features a Variable Torque Management system, which unleashes the massive 760 Nm peak torque linearly and powerfully right across its rev range. With a dry weight of 1370 kilograms, the 488 GTB sprints 0-200 km/h in an unbelievable 8.3 seconds and 0-100 km/h in 3 seconds flat.

There’s a whopping 50 percent more downforce on the 488 over the predecessor – courtesy several special features that've made their way – like the F1 inspired double spoiler in the front, coupled with the aero-pillar which diverts air more quickly and effectively. Most notable is the addition of active aerodynamics at the rear through a ‘blown’ rear spoiler, and the underbody has also been reworked featuring vortex generators.

The name 488 refers to each of the engine’s eight cylinders having 488cc capacity while the GTB stands for Gran Turismo Berlinetta (grand tourer with a coupe body-style in Italian).

Speaking about the new entrant, Mr. Yadur Kapur, Director, Select Cars Pvt. Ltd. said, “We are delighted to launch the Ferrari 488 GTB in New Delhi. We have many loyal Ferrari owners and fans in Northern India and this new launch allows us to bring them a fantastic new model in our market. We are confident that we will continue to create more value for our ever-increasing customer base with an unprecedented buying experience.”