Audi India has launched its much anticipated TT sports car in an on-going event in Delhi. Priced at INR 60.34 Lac, the TT has only been launched in a single petrol-powered 45TFSI variant. 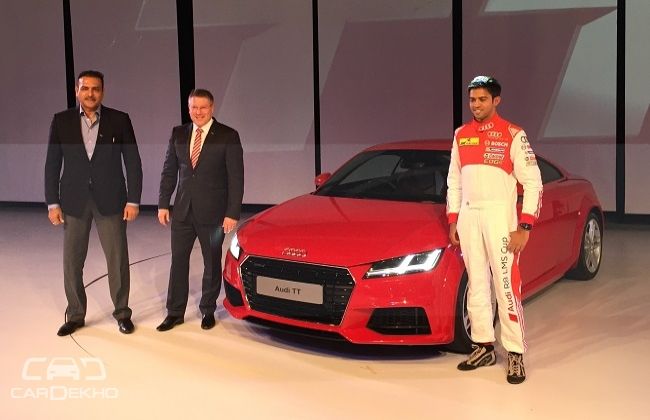 Based on the modern MQB platform, this third generation TT is 50 kilograms lighter than its predecessor despite having a 37 mm longer wheelbase. Its overall silhouette remains more or less the same and features the characteristic pronounced wheel arches and sloping roofline. While the new trapezoidal family grille, sleek matrix LED headlights and redesigned taillights are some of the new elements on the third gen TT.

Power is sourced from a 2.0-litre turbocharged petrol engine that puts out 230 bhp of maximum power and 370 Nm of peak torque. This power is sent to all wheels through as six-speed dual clutch automatic transmission which in turn is mated to brand’s famous Quattro all-wheel-drive drivetrain. In this state of tune it can touch the 100kmph marker in just 5.3 seconds and can hit up to a top-speed of 253 km/h.

The TT will be imported as a CBU (Completely Built-up Unit) from Audi’s Hungarian plant and will go up against the likes of BMW Z4, Porsche Boxster and the Mercedes-Benz SLK.