Imagine doing hypercar speeds in the 50s? Well MG Motor did just that with Stirling Moss and the Ex181 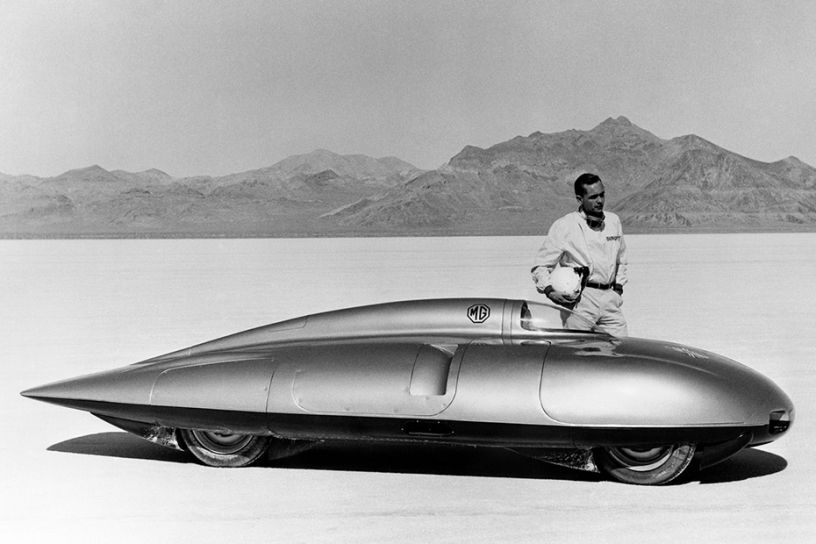 While MG Motor’s cars of today are mainly focused towards the comfort of their passengers, there was a time when the carmaker set about challenging the exotic machinery for the title of the world’s fastest car. We’re talking about the MG Ex181 that rewrote land speed record books in 1957.

The idea behind the Ex181 was conceived when MG Motor realised the marketing potential of  claiming bragging rights for being the manufacturer of one of the fastest cars in the world at the time. Thus the Ex181 was developed in 1956 with the focus of breaking the Class F land-speed record series for cars with engines between 1.1 and 1.5 litre.

The main highlight of the Ex181 was its teardrop shaped aluminium body that looked like a flying saucer on wheels. This design philosophy gave it minimal aerodynamic drag at high speeds. This also caused the Ex181 to be nicknamed the ‘Roaring Raindrop’. Underneath this unique design was a mid-mounted 1.5-litre twin-cam supercharged engine that delivered 290PS of power, which was impressive for its time. Now the final piece of the puzzle: finding the right driver. Joining Phil Hill was none other than Sir Stirling Moss. At the time, Mr Moss had already established himself as a top driver in F1 with six wins to his name.

The Ex181 was MG’s last attempt at a land speed record breaking car. It now sits at the British Motor Heritage Center Museum in Warwickshire, England. MG continues its pursuit for innovation even today in its line of passenger vehicles. While its 1.5-litre engines nowadays don’t make the same power figures as the one on the Ex181, they’re more fuel efficient and boast nifty bits like hybrid tech.

MG
VIEW ALL
S
Published by
Was this article helpful ?