AMG (Aufrecht Melcher Grossaspach), is the high-performance wing of Mercedes Benz. Originally formed by two ex-Mercedes engineers in 1967, it has been tuning Mercedes cars for nearly 3 decades now. AMG has been wholly owned by the Stuttgart-based car maker since 2007 and has proven quite the money spinner ever since. Suspension setups, tweaked gearboxes, loud exhausts, V12 engines, AMG has been doing it all to make Mercedes cars lose their sanity! 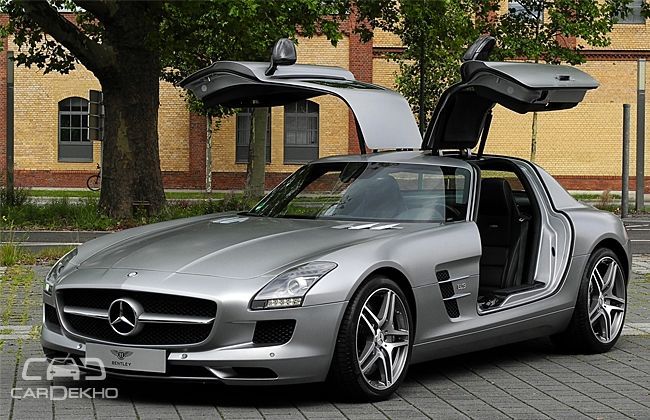 The SLS AMG was the first in-house designed car from AMG and has been Mercedes’ answer to the subversive performance based segment from a long time. With its gull-wing doors, it paid homage to the legendary 300 SL.

Powering the SLS AMG was a naturally aspirated, 6.3-liter V-8 unit which produced 571 bhp of power and if even this could not satisfy the lunatic racer inside you, then there was the SLS ‘Black series’ that churned out 622 bhp of power! The flamboyant gull-wing doors, the thunder of the enormously intense 6.3-litre V-8 motor and its outlandish design made it one of the best-looking cars in the last decade.

As we bid adieu to this legend, let’s have a look at its successor, the AMG GT S which also lands the German carmaker into the territory of lighter, more practical supercar like the Porsche 911.

Mercedes’ all-new offering, the AMG GT S evokes the “Sport Leicht” or the Sport Light character of its legendary forefather, the 300 SL. The design cues in the AMG GT S have been derived more from the SL than the SLS AMG.

Powering the GT S is a 3982cc AMG eight-cylinder bi-turbo engine. It is from the new family of V8s developed by AMG with a power rating of 505bhp at 6250rpm and peak torque of 650Nm from as low as 1750rpm. In comparison, the outgoing SLS AMG housed a naturally aspirated 6.2-liter V-8 yielding 563 horsepower and 479 pound-feet of torque.

Although it was more powerful, the SLS AMG was more than 100 pounds heavier than the new AMG-GT, meaning that 0-100 kmph times and top speeds are not all that far apart.

Design-wise you can spot a lot of similarities among the two. The latter gets back quarter windows where the SLS model wore a solitary window. Maybe the most striking contrasts are in the back of the two vehicles, where the 2016 AMG GT receives a seal style trunk-top with a coordinated window where the active SLS includes a more roadster-like back with a stationary back window. The AMG GT S also gets rear quarter windows, leaned out taillights and the trunk lid now incorporates the rear glass. No gullwing doors might be heartbreaking for many SLS AMG enthusiasts, but it also narrows down the gap between the classic and modern car design.

The long hood, smooth appearance and general shape are clear signs of how the Germans have thought back on the 300 SL for inspiration. The front grille and front bumper vents are likewise while the thin taillights and the trunk lid’s design additionally help us to remember the excellent tourer. In contrast with the SL 300, the AMG GTS' body is sleeker with more clean and definite lines flowing throughout. Another important and prominent change in the SLS’ is the bigger, chunkier set of 295-section rear tyres which add to the road presence of this beast.

To sum it up, the SLS AMG was an animal, something that was scary and one needed some driving art to tame it, whereas, the all new AMG GTS is like its sobered-up cousin which is far more drivable and practical than its flashy gull-winged predecessor.