Volkswagen came up with a mid-life update for its Polo last year. While the cosmetic changes were very minute and subtle, the alterations under the bonnet made it to the news for all the right reasons. The three-cylinder not-so-refined diesel engine was now replaced with an all-new mill having an extra cylinder on-board. 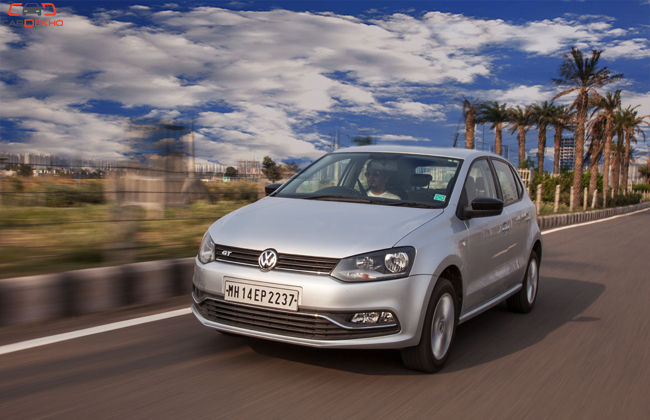 This new 1.5-litre four-pot oil burner unit helped the German carmaker to kill two birds with a single stone. How? First, it overthrew the squawky 1.2-litre diesel engine, overcoming the lack of refinement and adequate power in the standard version. And secondary, it became a cheaper alternative to propel its performance-oriented GT version that fetched additional taxes due to a bigger 1.6-litre motor from the elder sibling Vento.

We had a spin in the updated Polo couple of months back and found its very impressive overall. Although the earlier three-pot motor also felt decent around the city, but the moment you hit the highway and a quick overtaking was needed, the engine whined and laboured to power through, which is certainly not an issue with this new engine on duty.

Like the regular counterpart, changes on the GT TDI too aren’t that eye-catchy. It also gets the same bumper, double-barrel headlamps, redesigned fog lamps with chrome housing and the light chrome strip chrome front grille.

The ‘GT moniker,’ however, has now been repositioned from left to the other end of the front grille. The side profile has been left untouched except the all-black glossy wing mirrors, while the rear sees two prominent changes in the form of a black spoiler and refreshed bumpers sporting reflectors at both ends.

The 15-inch Estrada alloy wheel has also been retained from the pre-facelift model, which definitely looks sportier than the new ones on the standard version.

On the whole, Polo continues to be a good looking car, in fact the most sophisticated one in the league. But an enthusiast shelling out extra for the GT would be depressed, as the sense of  ‘exclusivity’ for the go-faster version has been neglected once again.

Like any other German offering, cabin of the GT focuses more on the functionality rather than aesthetics. The quality is top-notch and the layout is simple and extremely straightforward. Instead of the earlier dual-tone colour theme, the updated model gets an all-black treatment. From the black-beige dashboard to the silver centre console trim, now you get everything painted in black. Too much black. I must say.

The new flat-bottomed steering wheel, however, comes as a pleasant surprise and enhances the sporty character of the car. The fine leather finish on the steering wheel, gear knob and hand brake lever is absolutely brilliant to hold and feels high-end.

While the aluminium pedals and door sill plates with GT badges goes well with the theme inside and, overall, the cabin feels plush.

As mentioned before, the GT TDI comes with the same engine as the new Polo. However, GT being a performance-oriented version, deserved that extra edge. Therefore Volkswagen has tuned the mill to deliver an extra 15 PS of power along with 20 Nm of torque, and the result is an identical output as the old 1.6-litre engine from the predecessor.

The power delivery now is very linear and isn’t half as jerky and crazy as before. Useable push comes in from as low as 1,600 rpm and even when the turbo spools at about 2,000 rpm, the engine pulls very leniently to 4,500 rpm and approaches to the un-diesel-like 5,500rpm limiter. Truly a bliss!

The engine has been tuned to provide a broader and flatter power band. Driving at lower rpms in regular city scenario, doesn’t feel problematic as before and part-throttle inputs are well complimented via respectable increase in speeds. The engine can be a tad bit noisy at idle but settles down nicely once on the move.

The 5-speed gearbox has been retained and does perform fairly. Though, a DSG gearbox, like the one on the GT TSI, would have made this car more desirable.

Having said all this, I would still say that the menacing character of the older 1.6-litre unit was something that I very much missed during the test.

Anyone who’ll spend some extra bucks for buying this hot-hatch would obviously expect fun times behind the wheel and the GT doesn’t really disappoint on that part. The road grip and stability is rock solid, like a true German. In fact, even past the 150 kph-mark, the car feels relaxed and marches comfortably like a warrior, better than many of today’s entry-level sedans.

Polo has always been a great handler and GT is no different. Target a series of quick bends and it would be more eager than you to run down the curves. The steering wheel is decently communicative and every move of the wheel is met with positive response.

The suspension setup has been carried forward from the regular Polo that hovers somewhere between being overtly soft or stiff. A reworked stiffer suspension would have been an icing on the cake, but I don’t have complaints with this either, as it soaks up the bumps beautifully well, and keeping the conditions of our roads in minds, this is a boon.

Considering the fact that standard Polo TDI now gets an improved 4-cylinder inline engine rather than the sluggish three-cylinder unit from before, and the performance gap between the two has narrowed down by a great margin, shelling out almost half-a-lakh more for the GT TDI may not seem as worthwhile as before. But once you’re behind the wheel of this hot-hatch, you tend to forgive all of these, as this level of performance from a hatch is truly brilliant.