Mahindra Thar vs Mahindra XUV300: Not What You Think Comparison

The all-new Thar has been thoroughly impressive, both on and off tarmac. However, so far, it has only been compared to its predecessor. We pitch it against its urban sibling to see if it's any good for a family in the city. 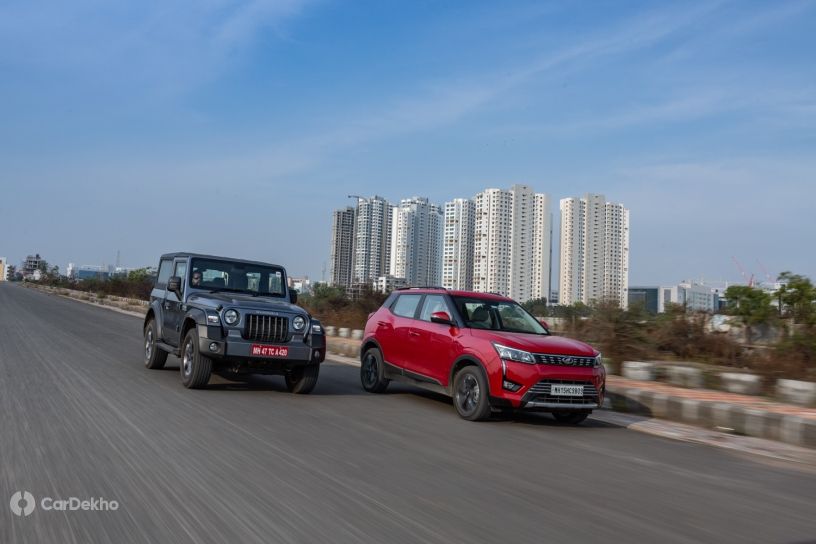 From the title, you’re probably thinking this is a pointless exercise, like comparing apples to oranges. However, this might just be THE comparison you need if you are considering the Thar as your next family car. You see, if you want to buy the Thar to take it off-road, go right ahead. But if you plan to ferry your family around in it, you might want to read this first. Here, we compare it to an average urban SUV, which in this case is the Mahindra XUV300. The objective isn’t to find a winner, but to figure out how close or far off it is to an average urban SUV used as a regular car in the city.

So you’ve bought the new Thar and want to show it off to friends and family arriving at the airport? Can you take your Thar to pick them up?

First, let’s look at our average urban SUV, the XUV300. Despite having the smallest boot space (256-litre) among sub-compact SUVs, it can accommodate one large suitcase and one cabin bag without compromising the seating space. Any other sub-4 metre SUV can hold three suitcases: large, medium and small and with space left for soft bags.

Can the Thar do the same? The simple answer is no. More so, if there’s more than one person. You see, the Thar has a tiny boot space which can, at best, accommodate two small or one medium suitcase and one cabin bag. That too, only if the rear seats are not reclined. To fit more luggage, you will have to fold the seats or keep it on the rear seats. If you have four people in the Thar, the rear passengers will have to hold the luggage and that can be pretty awkward.

We are so used to features and conveniences in the cabin that it's hard to imagine a car missing out, especially at Rs 15 lakh. Does the Thar cabin feel cheap?

Well, the Mahindra XUV300 comes with a decent set of features. It won't make you miss anything even though it skips some highlight features offered by the competition. It gets dual-zone climate control, automatic headlamps and wipers, steering modes, rear parking camera, front parking sensors, and a sunroof. However, connected car features and a wireless charger are missing here.

The Thar does very well when it comes to making sure passengers don't miss any features. Common with the XUV here are the touchscreen infotainment, Android Auto and Apple CarPlay, steering-mounted controls, electrically adjustable ORVMs, tilt-adjustable steering, tyre pressure monitoring system, height-adjustable driver’s seat, and remote keyless entry. It even gets a colour MID. However, a push-button start and a sunroof have been skipped. If you want to enjoy a sunroof experience in the Thar, you’ll have to buy the convertible top instead. Besides, it gets 4x4 with a locking rear differential, a feature you may or may not need depending on your usage. With such a loaded feature set, the Thar definitely won’t make the occupants feel short-changed inside the cabin.

Getting in the backseat of a car does not require a second thought. Just open the door, and get in. Can the same be said for the Thar?

The rear seats of the XUV300, like all SUVs, are designed for urban commutes and passenger comfort. Hence, you get sufficient leg, knee and headroom. The seatback offers good cushioning and recline for the passengers to stay comfortable on longer journeys, even when you have to seat three at the back. Coming to the features, you get an armrest, cupholders, and a charging option for your smartphone. The XUV misses out on rear AC vents, a common fixture in urban SUVs.

Forget getting in the back seat of the Thar, getting in the front seat too requires a climb. And only the partially fit members of the family will be able to make it to the back seat. So forget asking your parents or grandparents to get in there. Once seated, the foot room is compromised. While you can recline the backrest, it’s possible only if the boot does not have luggage. Head and knee room are ample, however, there is no way you can accommodate three adults here. Also, you get just two seatbelts. Even in terms of features, you get - nothing. No charging socket, no armrest, no cup holders, and even no sunshades for the large fixed glass windows. Then comes the hassle of letting the passengers in and out of the rear seat, every time you halt. So if you are being asked to sit on the backseat, you clearly aren't loved enough.

There is a lot of buzz on the Internet about the Thar’s AC not being effective for the rear seat passengers. We decided to put this argument to rest by performing a scientific test. We parked both the SUVs under the sun with their windows up for 30 minutes. White foam boards were kept under the sun for the same time. Then, the temperature of the board was measured with an IR thermal gun and they were placed on the backseat of the SUV. AC was switched on in full blast for 15 minutes, with temperature readings taken every five minutes. Here are the results:

The XUV manages to constantly reduce the temperature of the foam board at a higher rate than the Thar. After five minutes, the temperature difference between the two SUVs was 2 degrees, after 10 minutes, it was close to one degree and after 15 minutes, it was down to 0.5 degrees. However, with the large glass area, the passengers in the Thar could feel a little warmer than in the XUV300 when in direct sunlight.

Even if you manage to convince the family to get in the back seat on a hot sunny day, is the Thar’s ride quality comfortable enough to keep them there?

First, let's take a ride in the XUV300. The suspension on city cars is often set up a bit soft. That means the spring and dampers compress easily when the car goes over a bump or a speedbreaker. As a result, the suspension takes the impact and does not let the harshness translate into the cabin. The XUV300 is specially set up to deal with Indian road conditions and keep you well cushioned over rough roads. Even on an off-road patch, it manages to absorb most of the harshness and keep the occupants comfortable. But a trade-off of this setup is that if you hit a pothole fast, the suspension compresses fully and this time you take a hit with a risk of the underbody rubbing against the surface.

The Thar, on the other hand, is an off-road tuned vehicle. Which means, the suspension is designed to absorb hard hits and keep the car stable over the really bad patches. Hence, the spring and damping are hard. This, on the tarmac, results in an unsettled ride. Even on perfectly paved roads, there is a constant slight-wobble inside the cabin which does not let the occupants feel at ease. Even when you take it off the roads, the cabin remains largely unsettled as the job of the suspension here is not only to keep you comfortable but to ensure there is no damage to the vehicle itself. Hence, over broken patches, you are tossed around the cabin a lot. So, while the Thar gives you a sense of protection, it does not give you a sense of comfort. The passengers, especially those in the second row, would want to take a cab as soon as possible.

After all the tests we have put the two cars through, one thing has become absolutely clear. The Thar is not as capable as an urban SUV in terms of its space and practicality. While it comes close in a few aspects like cabin features and storage, the difference in boot space, rear seat comfort, and ride quality is significant. Overall, even in this new generation, the Thar ends up feeling like a compromise inside the city. Now whether you are ready to make that compromise, given the Thar’s charming road presence and off-road capability, is a decision you will have to take along with your family.