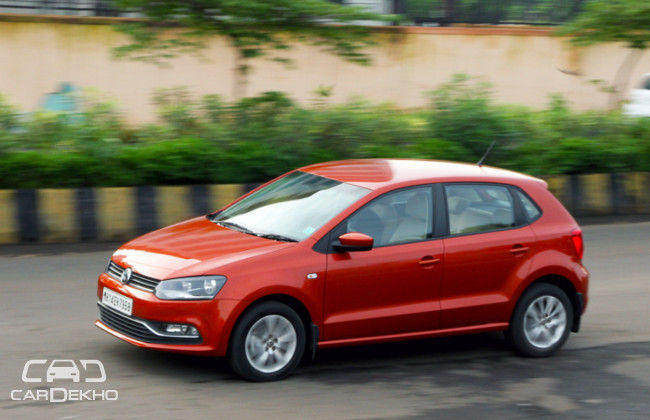 VW's popular compact hatch just got a string of updates and most importantly a potent diesel engine that it always deserved. We put it through its paces to tell you how this rejuvenated hatchback feels.

Let me start by bringing up this little quote that I remembered. They say, "the whole is only as good as the sum of its parts", and that is exactly where the original Polo's problem lay. While it promised a lot of good things like the brilliant styling,quality interiors and a good ride-handling package, it was lagging in the power-train department thanks to the under-powered three cylinder engines, and it was even more apparent in the diesel variants which made up for the bulk of the sales. So the whole package which was quite good was let down only by the engine. VW realised that and made amends by bringing in the GT version first with a slightly detuned Vento engine and now made us happier by entirely replacing the drab 1.2 TDI unit with a new 1.5 litre four banger. Ache Din you think? Lets find out...

Now the Polo is already a fantastic looking car and as a result there is very little that VW has had to do as far as the design is concerned. We got the car in the new rusty orange shade and we think its suits the Polo quite well.

Talking about the changes, a keen eye will notice the updated front grille, the new bumper with integrated fog lamps and cornering lights which light up the road edges quite well. Moving to the side, you also notice the new 10-spoke alloy wheels which look rather chunky.

And finally at the back, you have redesigned bumpers that now sport reflectors at both ends and an integrated license plate carrier. While the exterior changes might not be vast, the little details do their bit in making the Polo look fresher without affecting its handsome lines.

Now the Polo never boasted flamboyant interiors. Like most German vehicles, it was understated and functional concentrating more on quality rather than aesthetics. The new model now gets slightly revamped interiors which aim to make the cabin more pleasurable and classy.

The dashboard is now two tone in a beige black combo with silver inserts that add more colour to the layout, the rest of which remains the same. But what catches your attention almost immediately is the new steering wheel. The flat-bottom wheels not only looks fantastic but is great to grip as well. You get steering mounted controls on either side with which you can control the audio, voice calling, the multi information display and then some.

No changes in the seat, although the fabric is new. Frankly the fabric feels good, but the light beige shade is just an invitation for soil stains. As you can see in our pictures, the seats were already decorated with stains. Other than that no complaints about how they comfortable they are. Adequate support all around and quite ergonomic as well.

The rear bench is quite comfy too but only till you have average height adults sitting in the front. Anything close to 6 feet in the front seats and the legroom at the rear goes for a toss. I'd say the legroom is at most times adequate but could have been better. Boot space however quite good at 294 litres and better than the competition.

As far as equipment is concerned, the Polo has come a long way. From not having auto roll-up mirrors, you now get airbags as standard equipment across all variants, climate control, Bluetooth and voice command, parking sensors and then some.The new Polo comes pretty well equipped and the only addition you need we think are seat covers.

I still remember, driving a Cross Polo recently with the three cylinder diesel, the car felt decent around town, but the moment it hit the highway and a quick overtaking was needed, the car whined and laboured to power through. While drivabilty was average, outright performance was just not the Polo's forte. So when i got into the new Polo, that's the first thing i tried. Now armed with an extra cylinder, 90 PS of power and a meaty 230 Nm of torque (the old diesel made 75PS and 180Nm), the downshift provided a satiating surge of power which in turn lead to very comfortable overtaking maneuvers. Drivability has been bumped up big time as well, and I even tried shifting from 1st straight to 4th which the new engine managed without any complaints.

Driving through the gears you notice, the power delivery is quite linear and while it may not feel like the turbo has kicked in hard, but a quick look at the speedo, tell you this baby is really cantering. The 5-speed gearbox is not exactly a joy to shift, but plenty of torque means you won't be shift too often anyways. The throws are a little longish and the long travel clutch pedal doesn't make it very enthusiast friendly. But on a daily basis none of these things would really affect commuting. The engine can be a tad bit noisy at idle but settles down nicely once on the move. All in all finally an engine that does justice to the Polo and we love it.

The Polo always boasted a good suspension set-up and the new one isn't any different. It smothers undulations with ease and goes over the most illegally made speed breakers quite easily. Sharp bumps and abnormal concrete joints do filter in though. While the European Polo will definitely be riding a lot stiffer, for the Indian Polo, understandably, the suspension set-up has been tuned with comfort in mind.

Throw it around and you are greeted with understeer and some controlled body-roll. The 185 section Apollo's fight hard to keep traction in check and do a reasonably good job while at it. Braking is strong too and the ABS kicks in almost the moment you start going hard on the pedal. Even the in the pouring rains going hard on the brakes posed no problem with the Polo maintaining its poise all throughout.

While it lacked performance, the three cylinder unit was extremely fuel efficient. But the good news is that the new engine is almost as fuel efficient in spite of the increase in power and torque. With the 1.5 TDI unit the Polo returned 13.4 kmpl while on the highways the figure rose to 16.1 kmpl which are pretty good figures considering the performance the Polo now dishes out.

The Polo has finally got the engine it always deserved, and not to mention plenty of features as well. Its not perfect and has its share of flaws like the very average legroom at the rear, the poor headlight throw and the stain attracting seats, but then it has more things going for it like the brilliant styling, solid build quality, plenty of features and a good balance of performance and economy. The prices for the new Polo 1.5 TDI starts from Rs. 6.27 lakh for the Trendline variant to Rs. 7.37 lakh (ex-showroomDelhi) for the Highline which makes prices similar to the outgoing car and finally adding a lot more value to the car. The Polo was already a good car to begin with and now with a better engine and all the features you need, it is finally the car it should always have been.