The Indian Motor Racing scene got its biggest boost with the start of the JK Tyre Volkswagen Polo R Cup in 2010. The winners of the inaugural edition were Aditya Patel and Sailesh Bolisetti who are now competing in the Scirocco R Cup overseas. 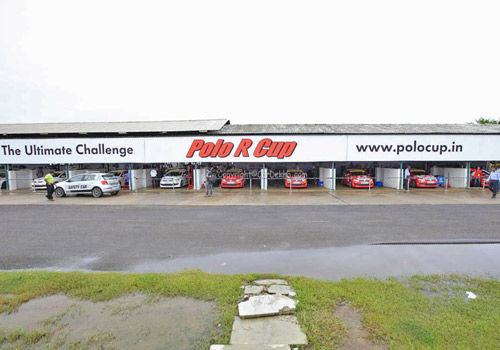 Drivers were selected after extensive scrutiny and additional emphasis was given on the physical fitness of the drivers for which many fitness camps were organized throughout the 2011 season.

An entry fee of Rs 5lakh had to be paid by the selected driver for full season which comprised of 6 races. This fee included everything, right from car race, car support including mechanics, driver helmet, clothing and training to transportation etc for the entire season.

The key to success in any competition is physical fitness. VW got their Professional trainers from abroad to get the season2 drivers in top class form and ready for action.

The drivers went through a rigorous training which included a lot of physical and track training like Power yoga, kick boxing and some amount of Army field camp too at Della Adventures Lonavla. Senior trainers from all the faculties were roped in so that the drivers got the best training.

We were at the Polo R Cup Finals at the Madras Race Track in Chennai to witness all the action on and off the field. We got up close and personal with the Polo Cup cars and the Drivers and also with the people behind the scenes who organized these adrenaline pumpung races.

The car used in Polo R race looks identical to the VW Polo that’s sold in India, however with a lot of weight shedding done and a lot of cabin plastic panels, seats etc being removed so as to reduce car weight and enhance performance. The Polo R is powered by an in-line 4 cylinder 1.6liter CRDI Diesel engine.

This 1.6liter Diesel engine is the same that also powers the VW Vento but the Polo R car gets an all new ECU Mapping and a fresh flywheel, intake and exhaust which pimp up the overall power from 110PS to 130PS on this race car.

The Polo R also gets a Race Driver Data logger that also has a tacho and shift lights, this logger logs the lap speed, braking and time in real time. The steering on the Polo R is also much smaller and sportier.

The Polo R gets all the stuff needed in the race which include the FIA roll cage, special tuned race suspension, OMP Racing driver’s seat, fire extinguisher, race profile tyres especially developed by JK Tyres with tyre profile of 100/65 R17 Slick/Wet types. The 2011 Polo R Cup cars also get the bonnet scoop air dams and water drinking system for the drivers to sip while driving.

A lot of body graphics is also added on the outside in addition to the sport race skirts all around.  A new set of 312mm discs in the front and 232mm discs at the rear are added to the 9 spoke alloys wheels on the Polo R.

An aerodynamic spoiler gives practical and visual boost to the race car. The Polo R also sounds much louder and has a very racy roar on its exhaust note.

More on the Final Race

After a tough battle on the wet track which witnessed a lot of rains in Chennai throughout the weekend, Vishnu Prasad was crowned Volkswagen Polo R Cup 2011 Champion. The action packed race for full of enthusiasm and vigor. This was the second year in a row that the championship title spot came down to the last race with Oshan Kothadiya securing the runners-up spot.

In another surprise Guest driver and veteran racer Sunny Sidhu won the final race with an overall time of 19:48.996 minutes, while international woman driver Maiken Rasmussen, who started 18th on the grid, fought through the field to finish in 2nd position, just 1.220 seconds behind the winner.

Mihir Dharkar who started in third position in race two drove hard and managed to finish in third place, 0.276 seconds after Maiken.

Champion Vishnu Prasad finished fourth, while championship contenders’ Oshan Kothadiya and Avdumber Hede finished in 5th and 6th position respectively. Sunny Sidhu led from the start and was followed closely by Maiken Rasmussen, who had a brilliant start from 18th on the grid, and Mihir Dharkar for the entire race, with neither of the drivers close enough to make a move.

Maiken Rasmussen is only the second woman driver to finish on the podium that too in her second visit only to the circuit.

The wet track made the conditions very slippery but also made for great racing with the top 7 drivers being separated by less than 5 seconds.

The last round of Polo R Cup definitely turned out to be an eventful one as championship contender Rahil Noorani was given the black and orange flag for a hanging bumper thus ending his championship hopes. This made it easier for Vishnu as all he had to do was finish in the top 5 to seal the title.

After the race, the Polo R Cup 2011 champion, Vishnu Prasad in the media briefing said, “I am thrilled to win the 2011 Volkswagen Polo R Cup Championship in what has been an excellent season for me.

This year has been really hard as the competition has been so evenly matched. I would like to thank Volkswagen for organizing a great championship and for all the help they have provided me with over the year.

The car has been magnificent to drive all season long and all credit must go to the team. My main aim for the race was to finish ahead of my rivals and not try anything risky, which I managed to do.”

Winner of Race Two, Sunny Sidhu was also overjoyed by his win and said “I am very thankful to Volkswagen for giving me this opportunity to race at the Volkswagen Polo R Cup. It has been a wonderful experience and the Race Polo is a well made car and it handled really well. I would like to congratulate the champion and wish him all the best for his racing career.”

We leave you with some on the track pictures of the Polo R Race cars and pictures of the race track and the pit stops, racers and of course the gorgeous pit girls. Wait for the next season of the JK Tyre Volkswagen Polo R Cup to begin.

Watch out for the next season as VW has promised us that it is going to be much more exciting with a lot of new rules and also new engines on the Polo R are expected.