Honda’s big hatch gets a small update. Is there more to it than a rejigged features list? 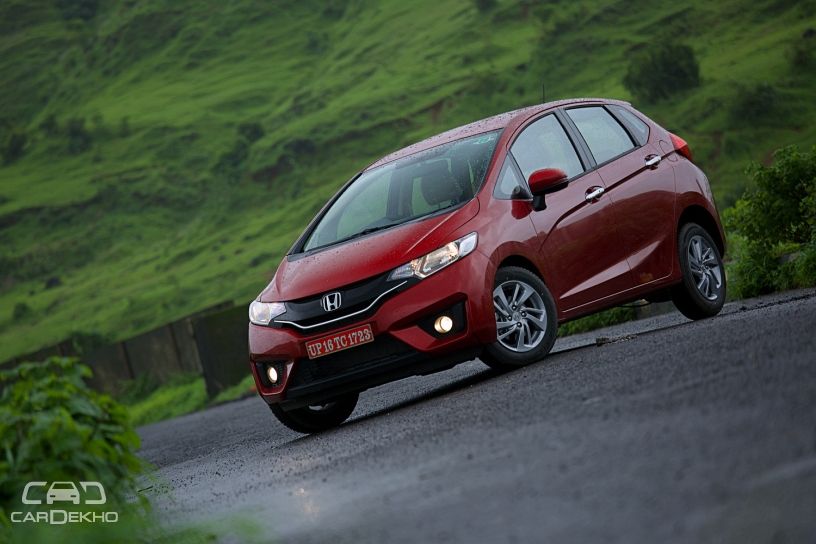 Believe it or not, the car you see in the picture is in fact the “new” Jazz. Honda’s hatch has got its first update after three full years. Surprisingly, though, Honda hasn’t bothered fiddling around with the recipe too much. Let’s run through what’s changed, and figure out if it has changed for the better.

What’s changed? We wouldn’t blame you if you thought Honda hasn’t bothered changing anything with respect to the design. That’s because, they haven’t — at all. The “updated” version of the Jazz has had no changes to the sheet metal, or the bumpers. International markets got a fresher looking model in 2017, replete with sportier looking bumpers, new alloy wheels, and a full-LED headlamp cluster (a la Honda City). Sadly, the Indian version gets the short end of the stick.

There’s nothing substantial to report here, save for the small dollop of chrome on the door handles, and the extended lighting in the tail lamps. The added lights, though, are available only in the top-spec VX variant. Since we’re talking of the VX variant, do note that the Jazz no longer gets the sweet-looking spoiler.

Honda could have used this update to jazz it up a bit (pun intended), and throw in a pair of daytime running lamps if not the full-LED headlamps. But, that’s not been the case. What we do get, are two new colours borrowed from the Amaze - red and silver.

Unless you’ve got your eyes set on the range-topping VX variant, the Jazz doesn’t have anything new to offer at all. Not that we expected a new design here, but everything continues to remain familiar, and friendly. The cabin remains ergonomically sound too - every button and dial falls to hand easily, and you’d feel at home almost instantly. Don’t fix what isn’t broken. Right!

What did need a whole lot of fixing, though, was the 6.2-inch touchscreen in the previous iteration. It felt like a Nokia 5233 in the age of the Google Pixel, and didn’t offer a seamless user experience to say the least. Considering the Baleno and the Elite i20 pack in seriously s-l-i-c-k touchscreens, the Jazz’ infotainment command centre stuck out like a sore thumb. Not anymore, though! The 7-inch DigiPad 2.0, borrowed from the Amaze is a wonderful update and we appreciate both, the added real estate as well as the responsiveness. Android Auto and Apple CarPlay are just bonuses.

The cabin is as airy as ever, and the room on offer continues to be stellar. Be it headroom, shoulder room or kneeroom at the rear, all of it is in generous supply. Seats continue to be soft and cushy, which might not necessarily be to everyone’s tastes. The lack of proper headrests at the rear might be another snag for some. If you’re a tall person, the integrated headrest juts against the neck which can get annoying, especially on long journeys.

Honda has also gone ahead and ditched the Jazz’ trademark “Magic Seats”. This feature alone made the hatchback a whole lot more versatile, and it’s rather surprising that Honda chose to strike this off the list. What’s even more surprising is the fact that there’s no 60:40 split for the seats either.

If you’re spending most of your time in the driver’s seat, you will appreciate the addition of the central armrest that’s borrowed from the WR-V. What’s also borrowed, is the start/stop button, keyless entry tech and cruise control. But that’s limited to the diesel- and petrol-auto variants only.

Other features, including automatic climate control, steering-mounted audio controls, tilt adjust for the steering, and height-adjustable driver’s seat continue to be on offer. So, nothing drastically new here either.

The Jazz soldiers on with its tried and tested duo of engines. There’s a 1.2-litre petrol and a 1.5-litre diesel motor on offer. While the petrol can be had with a CVT automatic, the diesel gets a manual transmission only. Yep, there’s no diesel-CVT combo like in the new Amaze.

The 1.2-litre, four-cylinder motor continues to make 90PS of power and 110Nm of torque. Compared to its immediate rivals such as the Baleno and the Elite i20, it is up on power, but marginally down on torque. Transmission options remain unchanged too, with Honda offering a 5-speed manual and a 7-step CVT.

Honda’s petrol motors are known for their refinement, and this one isn’t a whole lot different. It feels familiarly silent at idle and makes a likeable noise as you start wringing it. Don’t bother doing that too often, because the Jazz doesn’t really take well to being driven enthusiastically. Typical of i-VTEC engines, you need to go heavy on the accelerator if you want to make quick progress from a dead halt. Once the engine is in its mid-range, it feels reasonably peppy. That said, don’t expect to dart in and out of gaps in traffic in this one. This engine likes it when you take things slow.

When you do that, you’re going to appreciate the light clutch and the smooth gear throws. If you’re driving like a monk, the Jazz is happy to add to your moment of zen. And, if it’s peace you’re after, we’d recommend you spend the extra cash and get the CVT instead.

The automatic transmission simply adds to the Jazz’ easy-going nature. Of course, this transmission too doesn’t like being hustled, lest the Sport mode and paddle shifters fool you. Drive with a light foot and the Jazz automatic builds up pace consistently, and more importantly, smoothly. Acceleration for the most part feels proportional to the input on the pedal. But, bear in mind, the gearbox isn’t particularly quick, in case you need to get a move on quickly.

Slam the throttle down and the CVT hesitates for a second before locking the revs at the redline. Progress is swift; but it doesn’t feel so, since there’s an aural overload of that engine screaming its lungs out. You can take charge of the “gears” yourself by using the paddle shifters. If you can’t be bothered with that, you can always shift to ‘Sport’ mode. Don’t expect the Jazz to transform into a hot hatch when you do so, though.

The “new” Jazz petrol feels exactly like the old one. Calm inside the city, just about enough on the highway and not too fond of being driven at its limit. What about the diesel, then?

Honda’s trusted i-DTEC motor soldiers on under the hood of the Jazz. Just like in the City and the WR-V, the motor continues to make 100PS of power and 200Nm of torque. This is paired with a 6-speed manual gearbox. Does this one feel any different compared to the older motor?

We took a small spin, and couldn’t tell it apart from the older one. It’s slightly clattery at idle, and you would notice a few vibrations seeping into the cabin. Honda does claim a reduction in overall NVH levels, but we’d have to run a side-by-side test to verify that. As far as drivability goes, it remains as linear as before. Even when the turbo kicks in, there’s no surge of torque like you’d get on a 1.3 DDiS from Maruti.

What that means is that the Jazz diesel feels right at home inside the city and the lag won’t hold you back. If you intend on doing a lot of highway trips too, it’s the diesel you should be picking. You will appreciate the extra horses for sure.

The Jazz’ ride is the highlight of the package. There’s no change in suspension hardware, so it remains as comfy as ever. It manages to take the sting out of most patches of broken roads and potholes. On a calm city drive, it’s just what you want. The ride is relaxing as the suspension doesn’t let much into the cabin. As the speeds build, it remains poised even as the speedo hits triple digits. Push it past that, and you’d pick on a sense of floatiness. That said, as long as you stick to the speed limit, you should be plenty comfortable.

Since it’s tuned for outright comfort, there’s some predictable body roll as you enter a corner feistily. At no point does it feel nervous, though. What adds to the driver’s confidence is the ever so friendly Honda steering. Weight wise, it’s just right and it tells you what the front wheels are up to.

It’s also worth mentioning that the Jazz now gets MRF ZVTV rubber. These aren’t exactly enthusiast-spec, so don’t expect too much from them when you chuck it hard into a bend. They’re also a tad noisy, so you might want to consider an upgrade to quieter tyres.

In line with upcoming safety norms, the Jazz gets dual airbags, ABS and reverse parking sensors as standard. Other secondary safety features include a seatbelt reminder, front fog lamps, an immobilizer and a rear defogger.

Time to answer the question at the beginning. Is there more to the Jazz than a rejigged feature list? The answer, is no. Honda has done enough to ensure that the Jazz is more in tune with the times. We’re glad there’s a 21st century-approved touchscreen, with the correct set of connectivity options. What we aren’t too kicked about are the deletion of features, especially the magic seats, which in our opinion was THE defining feature of the Jazz. All said and done, the 2018 Honda Jazz isn’t a biblically different product compared to what you could buy for the past three years. It’s just as dependable, drivable and accommodating as ever.