Datsun looks to lure buyers to the GO and GO+ with added features and better looks. Have these updates finally made the duo worthy of your consideration? 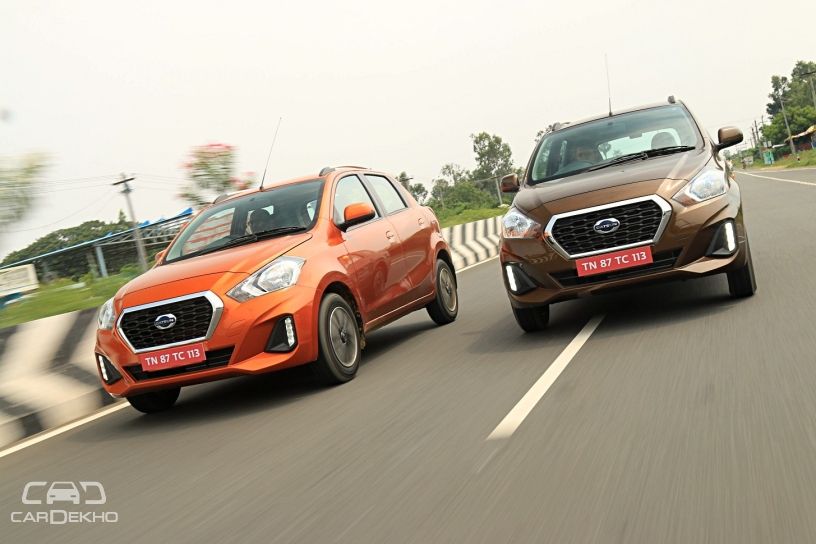 If you wanted to buy a big car on a tight budget, there are plenty of options out there from Maruti Suzuki and Hyundai. However, if you wanted something from the left field, you were limited to the Datsun GO and GO+. However, both cars had too many compromises like a sub-par interior quality, lack of features, high NVH levels and the lack of essential safety features. But Datsun says they’ve fixed these issues with the updated 2018 GO and GO+. Naturally, we had to have a GO at it and find out for ourselves.

The one thing that you immediately notice about the 2018 GO and GO+ is that both cars now look a whole lot better than before. It's not a distinctive change, but just enough to make you appreciate it a little more. The grille is now bigger than before and, along with the strong creases on the bonnet, the car look more imposing. The headlamps too have been refreshed but continue to feature conventional bulbs. Complementing this look is the new bumper which features a lot of sharp creases towards the sides. It also houses new vertically stacked LED DRLs, which is further highlighted by the black surrounds.

From the side, both cars look almost identical to the previous versions. However, both cars get a couple of minor changes to make then easier on the eyes. The ORVMs now get a body-coloured casing, while the wheels are now dual-tone diamond-cut alloys. Not just that, they are bigger and wider - 165/70 R14 when compared to the older 155/70 R13 wheels - and look even better.

The Datsun GO and GO+ now look better from the rear as well. The creases on the bumper towards the edges help accentuate the width of the car. The bottom crease of the bumper, which looks like a lip extension, is a neat touch. Additionally, you also get a rear windscreen washer and wiper as well.

Overall, there is a definite improvement in the way the duo looks. The updates make both cars appear more premium and will appeal to a larger majority.

Unlike the exterior, the interiors are brand new. While the overall plastic quality is only slightly better, there is an all-new dashboard which gets a much cleaner layout. Its all-black in the GO and dual-tone in the GO+. The centre AC vent design has been changed as well and they are now a part of the the top layer of the dashboard.

The non-adjustable steering wheel is the same unit as before but now comes in black. There is a brushed aluminium-like plastic cladding, which makes it look more premium. There are no buttons for audio or phone calls here, a feature which would have been a definite value addition. The instrument cluster is now borrowed from the Micra. When compared to the outgoing models, the new versions get an analog tachometer on the left. The small orange backlit MID (multi-info display) at the bottom displays the odometer, trip metre, distance-to-empty, time and fuel level. Strangely, there is no lane change indicator, which is a very basic yet useful feature, on both the cars

The biggest change here as to be the centre console, which now features a 7-inch touchscreen infotainment system. This system is responsive to use and features crisp graphics for menus. It also supports Android Auto and Apple CarPlay connectivity apart from the usual USB, Bluetooth and Aux inputs. Datsun will also offer a rear parking camera as an accessory, which sends the video feed to this screen. Sadly, the disappointing audio quality from the two-speaker setup takes away from the experience a bit. Below the touchscreen are knobs for the manual AC. The USB and AUX-in ports are placed a bit oddly on the panel below the gear shifter, away from the line of sight.

The gear lever is no longer a ‘floating’ unit as there is centre console compartment going all the way to the bottom. The 12V socket has been retained, but the cap is still not attached or connected to the socket, making it easy to misplace. And following customer feedback, the dash-mounted handbrake lever has been removed and has been replaced with a conventional lever between the seats.

Speaking of seats, Datsun has reworked them and they are now called ‘Anti-Fatigue Seats’ These feel well cushioned and supports your backs even on longer journeys. However, there is no height adjustment for the driver's seat, while the steering wheel continues to be non adjustable. This can make finding a comfortable driving position a bit tricky. Nevertheless, you now get electrically adjustable ORVMs, which is an added convenience.

Although the rear seat offers adequate headroom and legroom, you sit a bit low with the knees pointing upwards, which gives you the impression that the seats lack under-thigh support. Shoulder room feels wider than cars in its category and is just enough to squeeze three average-sized adults, albeit for shorter journeys. Sadly, there are a few things missing here as well, including adjustable headrests, rear centre armrest and lack of storage options as you only have one centre bottle holder and seat back pockets.

With the 2018 GO+, the third row experience remains exactly the same as before. There is no way adults can fit in there comfortably and it is best suited for small children. It lacks headrests and AC vents too. Also, you only get lap belts here. In our opinion, it’s best to fold or completely remove the third row and use the additional boot space (347 litres with third row folded; GO offers 265 litres) it offers.

Safety has been a major concern for buyers looking at the Datsun GO duo. After receiving dismal scores in crash tests, Global NCAP had deemed the structure of both cars unstable and unfit for further loading. However, Datsun seems to have pulled up its socks and has worked on improving the structural strength of the car, adding about 150kg of weight in the process. As a result, the updated models now meet the upcoming crash test norms in India. You even get dual front airbags, ABS (anti-lock brakes) with EBD (electronic brakeforce distribution), BA (brake assist), rear parking sensors and follow-me-home headlamps as standard throughout the range.

There as been no changes to the engine that powers both cars. They continue to be powered by the 1.2-litre, 3-cylinder petrol unit which produces 68PS and 104Nm of torque. However, Datsun’s engineers have made revisions to the gear ratios of the 5-speed manual box, which could have been done to manage the higher kerb weight. As a result, the car still feels peppy, with the engine pulling strongly from 2000rpm onwards. Datsun claims the GO and GO+ can complete the 0-100kmph run in just 13.3seconds. Rest assured, we’ll soon put both cars under a thorough road test and verify these figures.

However, what’s been affected by the few extra kilos is the drivability of both cars. While they continue to pick up from 30kmph in fourth gear without the engine knocking, you will have to wait a bit for the speeds to climb. This becomes apparent when the car is running on a full load, forcing you to provide a heavy throttle input to get going. Out on the highway, the car settles at triple speeds with ease but runs out of breadth soon after, asking you to plan your overtakes in advance. The claimed fuel efficiency of both car is now slightly lower than before. The figure now stands at 19.83kmpl for both the cars.

Both cars get a 10mm (180mm) bump in ground clearance thanks to the larger 14-inch wheels. This has also lead to a slightly different suspension setup, which, in this case, is better than before. The suspension takes on speed breakers and undulations with ease, cushions you well. This characteristic is even retained at higher speeds, as the car remains stable over broken roads and bad patches. What's even more impressive is that both cars are quick to settle down after hitting a pothole or bump. At triple digit speeds, both cars feel a bit bouncy, but that's something which is common across this category of cars.

Although engine noise is better insulated than before, the floorboard insulation still feels lacking as even the smallest pebble hit makes a sharp noise inside the cabin. Overall, the NVH levels have been improved to a point where it is now acceptable.

As far as handling is concerned, both cars are best suited for city use. The steering is light and lets you make quick turns or u-turns in traffic. However, the feedback from the unit feels a bit vague at high speeds and sudden lane changes doesn't inspire much confidence. A slightly heavier steering would have gone a long way to help with that. Body roll never becomes an issue inside the city, but you will feel it in the GO+ on the highways.

The Datsun GO and GO+ have come a long way since they were introduced back in 2014. The updated models' revised design as well as feature list should help both cars vie for attention in the over-crowded entry-level hatchback segment. What's more, Datsun has also addressed the concerns customers had regarding the safety of the GO and GO+ with the addition of a host of standard safety features. It has even managed to improve the overall user experience of the cars with sharper looks, a better cabin, new features and improved NVH levels. However, there are still a few odd feature omissions, including the lack of a day/night IRVM, lane change indicators and the lack of substantial underbody insulation.

But if you're to looking to buy your first car, the updated Datsun GO and GO+ should certainly be on your shortlist as it is not only priced competitively, but safer than before as well.