Mobilio to Munnar - Into the Nature 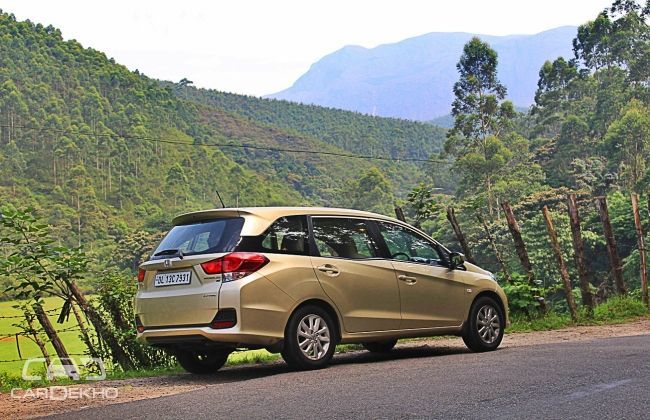 It’s that time of the year where the roads melt and people get a tan from just a two-minute walk. If you leave your car in the sun for five minutes, it will be transformed into a pre-heated oven. The Indian summer is upon us and this calls for a visit to someplace that is at least a minimum of 1000m above-sea-level, to escape from the scorching arms of the sun. After several considerations, we decided to go to Munnar, where we heard the news of pleasant drizzling from the past few days, which surely would be a welcoming change. To take us there awaited the Honda Mobilio with a promise of transporting all of us (six adults and a baby) and our luggage in comfort.

The Mobilio we got came in an i-VTEC guise with the 1.5-litre petrol engine rather than the i-DTEC variant, which would have been ideal for the road trip. But this also proved to be useful to check the petrol engine’s mile munching properties. We started off post-lunch and got on to the NH45. The four-lane road was pretty smooth and took us straight to Trichy without breaking a sweat. From there, a right turn took us to the astonishing town of Trichy and out on the other side towards Dindigul.

We reached Dindigul around 11 pm and decided to take a break for the night. After a not-so-early alarm and a filling breakfast, we started towards the last leg of our journey to Munnar. The distance was just 155 km, but the roads leading to the foot of Munnar were merely two-laned, and bad at some parts. The ride was slow but as soon as we started to climb the hills that lead us to Munnar, our spirits also rose.

We were still a little apprehensive about the climate, as after driving up the hills for more than an hour, the sun was still casting its heat waves on us. But things were about to take an unexpected turn. The crossing of the borders from Tamil Nadu to Kerala also brought a dramatic change in the climate.

The sun was gone and we were welcomed by the mist. The surroundings became greener and the temperature immediately dropped by several degrees. The pleasant experience of entering God’s own country was slightly spoiled by the Rs.50 bribe we had to pay the police personnel who was guarding both the borders, which left us wondering about the amount their wallets eat every day.

The Mobilio, though fully loaded with six adults and their luggage, drove up the hills with ease. The 145 Nm of torque may seem less, but the carrier from Honda pushed and pulled with the correct gear changes. The steering felt light and the driver seat was comfortable all along.

Upon reaching Munnar, we decided to keep it light on the sightseeing and to enjoy the blissful climate. There were many tourist spots across Munnar and a few away from the town, but it was better to take a single direction per day and cover all the destinations along that direction.

The beautiful landscapes of the tea plantation were a pleasant sight and some mist in the background presented a perfect picture. A couple of waterfalls and viewpoints were pretty nearby, but some were difficult to reach, so one should be prepared before making any plans.

Elephant and horse rides were available but be warned to be charged steeply. The lakes and boat rides were a must to enjoy the picturesque environment. The widespread tea plantations were off limits for tourists and had barbed wires all around. It was irresistible to not go to the plantation for a good profile picture, but while you are at it, keep an eye out for leeches of different sizes.

If you really want to experience nature, go off the regular spots and try discovering new places. Always keep a track of your whereabouts and the paths you come along. It is easy to get lost and the mobile networks are, most of the times, non-existent. Keep your cameras ready as you might never know when you'd spot a wild elephant or buffalos.

The Mobilio proved to be the kind of a perfect “people mover” it promises to be. The luggage space is still satisfactory with all the seats up, and the third-row seats offer enough room for two adults (not the six-footers). The engine never felt strained and the gearbox slotted into the gears most of the time. Features like touchscreen infotainment, reverse camera, rear AC vents and steering mounted audio controls make for creature comforts.