The Volkswagen Ameo is the newest car in the hugely popular sub 4-meter category and as we spoke about in our First Drive Review, it is a pretty competent machine. But the compact sedan segment also has one of the highest selling cars in the country, the Maruti Suzuki Swift Dzire. So how do the two cars compare against each other? For starters, lets take a slightly different approach to these two and let them go head to head in the Nine most important aspects that a buyer of a compact sedan would look for. 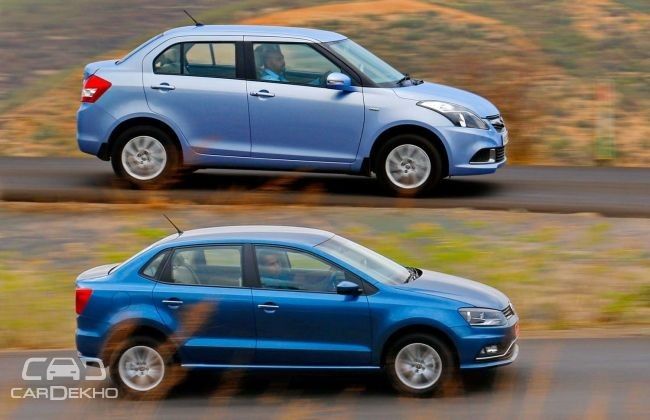 The Dzire and Ameo are completely different in their approaches to the sub 4-meter sedan conundrum. Both cars are based straight off the hatchbacks that they are based on and both cars when viewed from a dead front could be mistaken for the hatchback. That said, where the Dzire is curvy and slightly rounded, the Ameo is all about sharp cuts and a visually more compact design. Where both cars do look like they have boots pasted on, the Ameo does a far better job of integrating it to its overall design. The Ameo also is a lot more balanced overall as it does take after the Polo hatchback. The Dzire on the other hand is a little more bling and does appeal to a larger audiences with its well placed curves and bulging backside.

Both get a set of 15-inch multispoke wheels, chrome accents on the grille and chrome accents on the lower parts of the front bumper. Both cars also get smoked headlamps and while the Ameo gets a very flat tail lamp, the Dzire gets a nicely contoured unit. On the whole though, as mentioned earlier, the Ameo is certainly the better-looking car. It is also in our opinion one of the best looking compact sedan in India.

Rear seat space is one of the most important aspects of buying a compact sedan for most Indian audiences. Whether you are going to sit there yourself while being chauffer driven or have your parents sit at the back, the more space of course is better. Now neither of these two cars are the benchmark in terms of rear leg space (that would go to the Ford Figo Aspire and the Honda Amaze), but the Ameo being a slightly newer car does trump the Dzire in this category too. And the same goes for headroom and shoulder room. Neither of these cars offer a cavern to sit in, but the Ameo, even with its slightly lower roof offers a little more room than the Dzire. That said, the Dzire is not uncomfortable for three people and to be honest neither of these two cars take three large people next to each other on the back seat comfortably.

The Ameo also gets a rear AC vent option that the Maruti Suzuki Swift Dzire does not. In a country like India where temperatures cross 45 degrees in the summer, a rear AC vent for a family car like a compact sedan is a large omission. This round goes to the Ameo too.

Most people buy a sedan because of the fact that it has a separate boot. The Volkswagen Ameo and the Maruti Suzuki Swift Dzire get 330-litres and 320-litres of boot space respectively. Although this is not the benchmark in the segment, both boots are large enough to put a good amount of bags or luggage in. Although the Ameo is larger on paper, the boot loading lip is slightly higher which makes it slightly more difficult to load something into. The Dzire on the other hand does get a lower loading lip but a smaller overall opening as compared to the Ameo. Although very very marginally, the Ameo takes this round too.

Indian audiences have started to look past interior space and fuel economy and more towards the sheer number of features that the manufacturer offers in their cars. This is exactly why cars like the Renault Kwid have done extremely well in India. When compared, the Ameo totally outclasses the Swift Dzire in terms of gizmos. Both cars get a well integrated infotainment system with features like Bluetooth streaming and phone controls along steering mounted controls. The Ameo however gets a high quality color touchscreen that comes with navigation and a mirror link application to pair your Android smartphone with. While both cars also get features like electronically adjustable and folding rear view mirrors, the Ameo also gets features like cruise control and rain sensing wipers.

When it comes to safety, the Ameo might not get the six airbags that the likes of the Aspire does, but it does offer two airbags as standard across all variants. The Ameo also offers ABS on most variants as a standard fitment as opposed to the Dzire that only gets it on the higher variants. The Ameo also has passive safety features like a lazer welded roof structure that the Dzire does not. This does improve the overall integrity of the body shell in a way. Another round to the Ameo then.

This is where the Dzire starts to creep back and win some brownie points. Now, both the Dzire and the Ameo get 1.2-litre petrol enignes, but both are completely different from each other. The Ameo gets a 3-cylinder and the Dzire gets a 4-cylinder. The number of cylinders in itself makes the Dzire’s engine a lot more balanced and a lot peppier than the one available in the Ameo. The Dzire is also more powerful with 85PS of peak power as compared to 75PS that the Ameo gets. And it is much better to drive too as the Dzire gets 115Nm of torque as compared to 110Nm of torque of the Ameo along with the fact that power is delivered smoothly through the whole rev range. We also like the NVH levels on the Swift Dzire’s engine as compared to that of the Ameo.

When it comes to fuel efficiency, the Dzire, even with the more powerful engine is still a lot more fuel efficient than the Ameo. According to ARAI certified figures, the Dzire gives 20.85kmpl vs the Ameo’s 17.83kmpl. Of course, in real life it would be very difficult to get these same figures in normal day to day driving but, the usable low-end power of the Dzire will make sure that it is a more fuel efficient car.

For most people who buy a compact sedan, ride comfort is paramount. The Ameo, like most Volkswagen cars is slightly on the stiffer side and therefore does compromise on ride comfort in favour of a more handling oriented setup. That said, the Ameo does feel comfortable up-front for the driver and it is only in the rear that you feel thrown about a little bit. Drive the Dzire back to back with the Ameo and you are treated to a far more forgiving ride. The Dzire is even more comfortable up front for the driver and a lot more comfortable at the rear for the passengers. The Dzire petrol is also a lot quieter in terms of blocking out the road noise and also gets a quieter engine, all of which adds to greater ride comfort for the average passenger.

As we mentioned earlier, the Ameo’s chassis setup is a more handling oriented approach and it shows. Although there isn’t a huge difference between the way the Ameo and the Dzire handle (the Dzire chassis is one of the best comfort-handling blends), it does have a slight edge when it comes to offering overall feedback. Everything seems a bit sharper in the Ameo and the steering feedback feels a little bit more direct than the Dzire. That said, as a package, the Dzire is the better of the two in this category.

The Volkswagen Ameo is the new kid on the block and frankly we aren’t at all surprised to see it trump the good ol’ Dzire in more than a few sections. It looks better, is better built and has a great list of gadgets that make it a juicy proposition. That said, the Dzire is still a more comfortable and a better car to drive. Now the Ameo starts at Rs 5.3 lakh which is marginally more expensive than the Dzire for the base variants. The difference of Rs 10,000 remains all the way to the top of the line variants though with the ZXi version of the Dzire coming in at Rs 7.0 lakh and the highline Ameo priced at Rs 7.1 lakh (ex-showroom, Delhi). So, which one is best? Well, if you are looking for an easy to maintain car that drives well, the Dzire is still the better choice. But if you are looking to buy a compact sedan and still make a statement, the Ameo is certainly the better car and our choice between the two cars we have compared here.

But, will the Ameo’s reign as the best car in the segment be short lived? With the new Swift and Dzire twins coming next year, the segment is long overdue for a major shake up.