The Altroz, with its new platform and BS6 engines, is looking to set a new standard in the premium hatchback segment. But to do that, it needs to better the likes of the Baleno and the Elite i20. Can it really become the 'Gold Standard'? 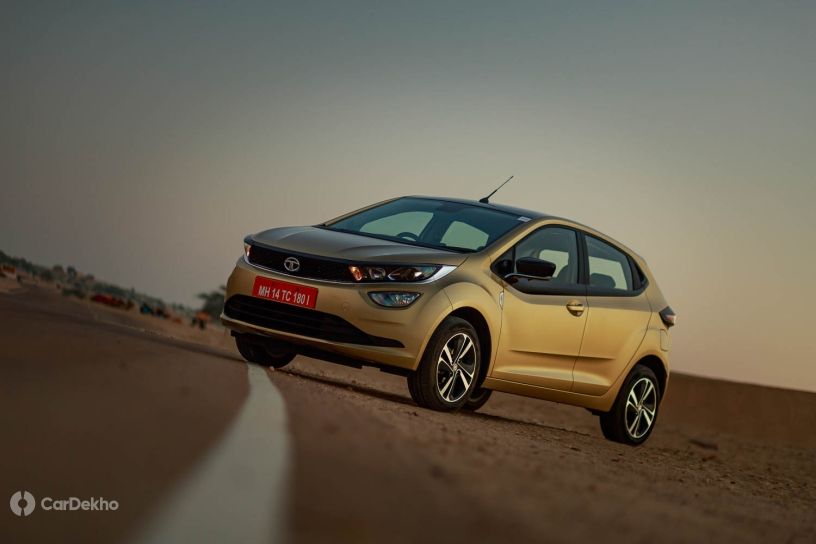 Update: Tata has launched the Altroz hatchback with a starting price of Rs 5.29 lakh for the petrol and Rs 6.99 lakh for the diesel, ex-showroom pan-India. Read our launch story for more details.

Though the Tata Altroz is brand spanking new, it comes with a lot of… err baggage. It not only has to meet your expectations, but also pave a solid path for future Tata cars based on the Alfa Arc platform. Not to mention, set a new ‘standard’ in the premium hatchback space, which already has able cars such as the Baleno and the Elite i20. That’s a lot of pressure to put on one car.

Luckily, to take on this pressure, Tata has equipped the Altroz with two BS6 engines, a long feature list and its most advanced platform. Not to mention, the design, which has everyone turning around on the roads. And if all that doesn’t work, it weighs a ton. Is this enough? We got a short spin in Jaisalmer to find out just that.

Mr Pratap Bose and his team have managed a sweet balance with the Altroz. A balance of keeping the silhouette conventional to please the conservatives, while dialling in radical and detailed elements to keep the design nerds happy. The first thing you will notice is the raised headlamps and grille, which form a new layer over the bumpers. Surrounded in black, this makes the muscular bonnet appear to be floating on the body.

And then comes the flared muscular wheel arches, which won’t look out of place on an SUV. From the side, you notice the contrast black in the window line, ORVM and the roof. The wheels are 195/55 R16 for the petrol and 185/60 R16 for the diesel, both stylish dual-tone alloys. The design looks even cleaner with the rear door handles tucked away next to the window.

At the back, the theme of the sharp creases continues with the tail lamps forming another plane over the bumpers. And because this entire panel is blacked out, the tail lamp cluster isn’t visible and the lights seems to be floating in the body at night. Well done!

But the devil is in the details. The black panels on the outside are finished in piano black, which is notorious for getting scratched. In our conditions, it will require a lot of effort to look fresh. You have to pull the further side of the rear door handles to open it, which takes effort to get used to. The headlamps are just projector units, not LEDs. Even the DRLs are not very detailed. The tail lamps too miss LED elements. Despite these misses, the Altroz is the widest car in the segment and possibly has the best stance. We can only imagine how modern the car would have looked without these misses. If you're looking for road presence from your hatch, look no further.

The Tata Altroz has a trick up its sleeve before you even get inside. The doors, both front and rear, open a full 90 degrees for easy ingress and egress. This ability has been dialled in by the Alpha Arc platform and will continue to future products as well. Sit in the car, close the door and it shuts with a solid thud.

The steering is possibly the most impressive bit in the interior. It has a flat bottom and comes wrapped in premium leather. The mounted buttons for the audio, infotainment, calls, instrument cluster and the cruise control sit over the horn actuation. The instrument cluster too is a fancy 7-inch display with details such as music, navigation directions, drive mode and even various colour themes.

The dashboard has also been designed in various layers. The grey portion, holding the centre console, is a bit elevated and hides ambient lighting under it. Below it is a silver satin finish, which feels premium, and at the bottom you have grey plastic, which isn't as nice. Along with the light and dark grey fabric upholstery on the seats, the overall experience of the cabin is quite airy.

The touchscreen is a 7-inch unit with a layout similar to that of the Nexon. Luckily, it isn’t laggy and works smoothly even with Android Auto and Apple CarPlay. It also displays the climate control settings in one corner, and gets physical buttons to make operating it while driving more ergonomic. A neat trick here is that you can give voice commands to change climate settings. In other features, you get a height adjustable driver’s seat, automatic headlamp, rain-sensing wipers, rear wiper and washer, 6 speakers, power windows with auto-down on driver side and engine push button start stop.

The cabin is high on practicality too. You gets tonnes of storage like an umbrella and bottle holders in the doors, two cup holders, centre storage space, front sliding armrest with storage and a big 15-litre cooled glove box.

The overall width of the Altroz translates to a wide rear cabin space here as well. This does make seating three abreast easier. And if you are seating only two at the back, they can enjoy the convenience of a centre armrest. Other features on offer are rear AC vents and a 12V accessory socket. But the plastic quality on the AC vent controls leaves a bit to be desired. Also, the rear should have had a USB port instead.

In terms of space, you get a decent amount of legroom as you can tuck your feet under the driver’s seat. Knee room is ample too, but the headroom might become an issue for taller occupants. The under-thigh support does feel a bit lacking but the cushioning is soft and will make for a comfortable long distance drive. Overall visibility remains good as well, even with the sharply raked windows.

In terms of safety kit, the Altroz gets dual front airbags, ABS with EBD, cornering stability control, ISOFIX child seat mounts and rear parking sensors as standard. Also the cars feel solid and well built, like Tatas of the recent past.

The Altroz comes with the second largest boot in the segment (after the Honda Jazz), measuring an impressive 345 litres. The boot floor is big and can easily take up larger suitcases. But you do not get a 60:40 split here and that means you will have to compromise the rear seats for extra space. Nonetheless, folding the seats opens up 665 litres of space, which is quite a lot.

The Altroz packs two BS6 engine options. The petrol is a 1.2-litre 3-cylinder unit whereas the diesel is a 1.5-litre 4-cylinder unit. Both come with a 5-speed manual transmission. Let's start things off with the petrol.

The block is the same as the Tiago but has been heavily worked on, including a VVT (Variable Valve Timing) system and new exhaust components to make it BS6 compliant. While the emissions are now under control, it has taken away from the drama of a petrol engine. It feels crude to push and the three-cylinder clatter remains present throughout the rev band. The refinement doesn't feel anywhere close to what the segment has to offer. The power deliver is liner and smooth. This will be helpful in the city as it offers a smooth drive, not overwhelming you at any point. It is capable of being a good city dweller and will be more than capable of keeping you comfortable in bumper to bumper traffic.

However, the lack of power and punch is evident. The engine is slow to rev and even at higher revs, doesn't feel sporty. This becomes more prominent on the highways. You will have to downshift a couple of gears to make a quick overtake or to hit a gap in traffic. This wouldn't have been a problem if the transmission were crisp enough. But it feels clunky and the shifts feel loose. This could be partially down to the Altroz weighing 1036kg kerb. For reference, the Baleno Smart Hybrid petrol weighs 910kg.

A tick that the petrol engine has in its belly is auto engine start-stop. And if my memory serves me right, this could be the first affordable car to get this feature without any hybrid tag. You also get an ECO mode, which dulls down the throttle response, in turn, improving efficiency. The official figure haven't been revealed yet. We are eagerly waiting to drive the 1.2-litre turbocharged petrol engine and the DCT automatic transmission, which will be launched later in 2020.

The diesel engine, in comparison, is more versatile. The refinement is still not upto the mark of the segment but it does offer a good city drive. There is ample torque at lower revs band and hence making overtakes or hitting gaps can be done easily with minimal throttle inputs. The turbo surge is also kept under control and gives just the right push for some quick overtakes. But as you start to push, the engine starts to feel more gruff. The power delivery beyond 3000rpm is not linear, and comes and goes in spikes. Gear shifts here are better than the petrol but still lack positive clicks. Overall, despite its limitations, this is the engine to pick if you are looking for more versatility.

This could easily be the most impressive thing about the Altroz -- it manages to deliver an impressive balance between grip, handling and suspension setup. The Altroz manages to cushion occupants well from the surface. Be it going over speed breakers or potholes, the suspension manages to take care of them on its on with the occupants hardly feeling it working. It is quiet as well and you can only feel a mild thud in the cabin if you go over something nasty, like a level change. It settles nicely after a bump as well, which will help you stay comfortable for longer journeys in the car. The same composure is maintained over highways as well.

This comfort hasn't come on the cost of handling either. The car remains flat through turns and doesn't make the driver nervous. The steering feedback does leave you wanting more but still, you won't feel the lack of confidence even in spirited driving. In fact, this could be the best suspension vs handling setup in the segment. This is reassuring as the same can now be expected from the sedan and SUV that will be based on this platform.

The Tata Altroz fits right into the mix of the premium hatchbacks. But because it does not deliver a step-up or wow experience over its rivals, it fails to set a new standard in the segment. Tata had a clean slate and a lot of benchmarks to achieve that, but did not manage to do so. And then there are the engines. The diesel does feel like a versatile unit and delivers a good drive on both highways and in the city. But the lack of punch and refinement from the petrol limits it use to mostly in the city. Also, both the transmission and shift quality should have been better.

But, what impressed us is the long feature list is the practicality of the cabin with loads of storage and a good fit and finish. The balance of the Alpha Apc platform too raises the bar on comfort and handling in the segment. And finally, the looks, which definitely set a new standard in the segment. The all-important question now to deliver a clear verdict is the price. If Tata manages to undercut rivals Baleno and Elite i20, the Altroz could be a strong contender in the market.